Tronsmart promotes its new wireless headphones with parallels to the Apollo program. The famous Apollo program succeeded in 1969 by the advancement of the technology and the courage of humans to bring a man on the moon for the first time. The Apollo Bold headphones from Tronsmart are also intended to take the field to a new level by further developing the technology. Whether the innovations are on the same level as the moon landing or whether this comparison is just marketing, that is what we want to find out for you in this test.

Even when unpacking, the shiny bronze-colored ring that frames the user interface catches the eye. Even here it becomes clear that design is always a matter of taste, because not everyone likes the color. But inside this ring is the antenna, which is manufactured using LDS. Laser Direct Structuring offers the possibility to bring an antenna onto a 3D surface and thus not to take up any additional space as part of the actual structure. The user interface is especially symbolized again by a hand made of squares, which extends the index finger.

The two buttons can then be transported in a round, simple case and also loaded at the same time. The battery of the headphones is supposed to last 10 hours already and due to the integrated battery in the case, the headphones can be charged within 10 minutes for another hour of use. All in all, a total playing time of over 30 hours without a power outlet is possible. This is quite long enough for a weekend without electricity, as long as you lie down to sleep. The times do not refer to the full volume of course, then the playing time can also be significantly less, but we do not recommend using the headphones at full volume, because the little things have real power.

In terms of workmanship, the headphones fit very well into the case and don’t fall out unintentionally. So the fit in the case is no problem.

The headphones are made in a way that the different sized attachments can be changed easily, but more about that later. Before we take a look at how the headphones can be worn, let’s have a look at the scope of delivery.

As already mentioned, the Tronsmart Apollo Bold are supplied with the Bluetooth signal by an LDS laser antenna. This is to achieve a more stable performance and less interference to the signal. In addition, this also increases the range, so that you can easily walk around the whole apartment without the connection being interrupted.

At the heart of the headphones is the Qualcomm QCC5124 chip, which was specially designed for energy-efficient audio applications and at the same time offers a wide range of features. For example, aptX audio is supported, which enables transmission almost without delay, so that videos can also be viewed lip-synchronously.

Another feature is Active Noise Cancelling. Through the microphone, which is located underneath the LED, external noise is picked up and can be almost completely filtered out by the technology. Complete filtering out is so far only possible in the lab, but the effect is clearly noticeable, so let’s take a look at it in practice. 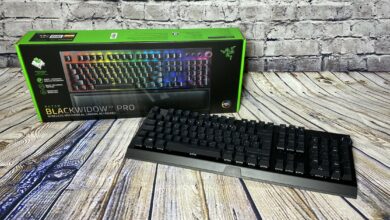