In the age of smartphones, another technical product is also becoming more and more important: headphones. They have been around for a long time, but they have been developed further and further, and large, wired over-ear headphones became Earbuds. Nowadays, almost everyone wears Earbuds on the go and therefore the demands on Earbuds have also become correspondingly high. Whether it is the wearing comfort, the sound quality or even the features, depending on the price range and depending on the manufacturer, some areas are increasingly targeted and other areas fall behind. With the Buds Air Pro, realme has now launched new earbuds on the market and we take a closer look at them. Where has special attention been paid and which areas have perhaps been neglected? You can find out here.

The Buds Air Pro from realme are based on the Apple AirPods in their design. One relies on a stem, instead of letting the headphones consist only of a button. This not only has design-technical reasons, but also offers haptic advantages, but more about that later. The European version can only be ordered in “Soul White”, while there is also a black version. The headphones come in yellow packaging, which shows the black Eardbuds. The packaging then also contains the white, glossy case alongside them, which looks very cool, but any form of dirt will be noticed directly.

The opening is kept in the closed state by magnets. Their strength is enough to prevent unintentional opening, but at the same time it is not too strong. The only drawback is that the workmanship at this point is not optimal and thus an uneven joint can be seen. The lettering “realme” is still on the front of the case, as well as a status LED that can be activated via a button on the right side. In addition to a yellow USB Type-C charging cable, three pairs of earplugs are included. However, these are only loose in a bag, so you have to find the suitable ones. Before we actually test the headphones, let’s take a quick look at the technical specifications:

The New Soundboks: Perfect sound anywhere in the world 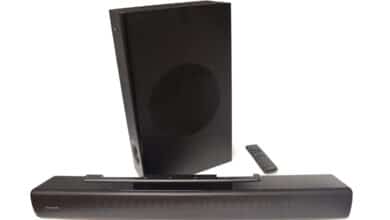 Stage V2 – 2.1 soundbar and subwoofer from Creative in test