Acer has used the run-up to this year’s CES to draw attention to its upcoming gaming monitors. And these seem to have a lot going for them. Besides a powerful IPS panel, they not only come in high resolution, but also with exciting features. For example, the Predator XB273UNX is the first monitor in WQHD resolution that not only offers an amazing 275 Hz, but also Nvidia Reflex. With the Predator XB323QKNV, a 4K monitor is also supposed to come, which should be able to offer 144 Hz and a large screen diagonal of 31.5 inches. Resolution and refresh rate match the data of the Acer Nitro XV282K KV. However, the Nitro’s screen diagonal is a bit smaller. However, it can score with exciting additional features thanks to HDMI 2.1.

A look at the spec sheet of the Acer Predator XB273UNX makes it clear that it lives up to its name. The monitor with a screen size of 27 inches resolves in razor-sharp WQHD. Furthermore, a refresh rate of 275 Hz is supposed to provide smooth screen content. The suitability for demanding gamers is rounded off with Nvidia Reflex. However, the astonishingly high refresh rate often takes a toll. For example, many manufacturers cannot install an IPS panel with such a high refresh rate, but “only” a TN panel. This is a bit surprising since even models with a proud 360 Hz now rely on IPS technology. Fortunately, Acer also relies on IPS technology. The high-performance panel offers a response time of 0.5 ms.

Acer undoubtedly creates a monitor here that is quite specifically aimed at professional e-sportsmen. But those who have the necessary small change and consider themselves an ambitious gamer can of course also grab it. This high-performance monitor is especially suitable for fast shooters. Not only the high refresh rate is used here, but also the Nvidia Reflex Latency Analyzer (RLA). This special technology makes it possible to measure the input lag in real time. Nvidia conveniently integrates this technology into the G-Sync module. Acer has thus achieved a premiere. After all, only 360 Hz monitors with this technology have been announced so far. According to Acer, the monitor’s positive overall picture is rounded off by a large color space coverage. According to the manufacturer, the 27-incher should be able to cover 95 percent of the DCI-P3 color space. This is especially important when you want to enjoy a movie instead of gaming. The monitor’s HDR capability is supposed to provide high contrasts. However, we do not yet know how this looks in detail.

In May of this year, the gaming flagship is supposed to launch at an MSRP starting at 1,179 euros.

With the Predator XB323QKNV, Acer finally launches a 4K monitor that is 31.5 inches and still offers a smooth 144 Hz. The manufacturer has thus succeeded in filling a frequently requested gap. Until now, you had to look down the tube if you were looking for a monitor with these specs in a size between 27 and 43 inches. The monitor’s pixel density of 139 PPI is higher than the Acer Predator XB273UNX with its 108 PPI. On top of that, the almost 32-inch monitor is G-Sync compatible. This means that gamers can enjoy native FreeSync. Since this works up to 144 Hz, smooth motion pictures are virtually pre-programmed. The monitor’s DCI-P3 coverage is slightly lower than that of the flagship. Instead of the 95 percent of the Acer Predator XB273UNX, “only” 90 percent is given here.

The Acer Predator XB323QKNV will also hit our store shelves as early as May. The manufacturer wants to call an MSRP of 1,199 euros here.

The Acer Nitro XV282K KV is the cheapest monitor that the manufacturer has presented in the run-up to CES. This one comes with a screen diagonal of 28 inches. A resolution of 4K is supposed to provide a razor-sharp picture. Users who connect a picture source via HDMI will be happy about the HDMI 2.1 standard. Frame rates of up to 144 Hz are possible here. This is not only interesting for PC gamers, but also console gamers. After all, with HDMI 2.1 you can benefit from the new features of the next gen consoles XBOX Series X and PlayStation 5. One example is the Variable Refresh Rate (VRR) up to 120 Hz. Those who use the panel natively can look forward to a response time of 1 ms at 144 Hz refresh rate. The new Nitro is also supposed to be rich in contrast. According to Acer, it supports HDR 400, and the manufacturer claims that a contrast of 100,000,000:1 is possible. However, this sounds rather unrealistic. We think the non-dynamic contrasts that IPS usually provides are more likely. However, these are still in the good range with 1,000:1.

Like the other two models, the Nitro XV282K KV is expected to launch as early as May. With an MSRP of a fair 949 Euros, the monitor sounds like a good deal for gamers who don’t want to dig too deep into their pockets. 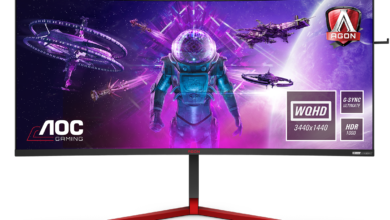