The impact of AMD’s new processors can hardly be overlooked at this year’s CES. This also applies to the gaming experts from Asus ROG. Thus, the manufacturer has equipped several models of its popular gaming notebook series “Scar” and “Strix” with a juicy upgrade. AMD CPUs from the Cézanne family are supposed to be on board. The GeForce RTX 3000 from Nvidia is supposed to provide decent graphics performance.

A look at the processor immediately reveals the biggest change. Thus, Asus ROG has entered AMD’s current CPU family with its two gaming notebooks Scar and Strix. Thus, the manufacturer manages a significant upgrade when comparing the new processors with last-generation Intel CPUs. The predecessor models only used an Intel Comet Lake-H. Speaking of upgrades: Asus ROG has also adjusted the graphics settings.

Powerful Nvidia graphics cards of the GeForce RTX 3000 family are now installed here. In particular, the manufacturer relies on the notebook variant of the GeForce RTX 3080 with a proud 16 GB VRAM. However, you can also opt for the RTX 3070 with 8 GB VRAM. Those who opt for more performance will also have to think about a new cooling system. Asus ROG seems to have thought this through as well. Thus, not only larger heatsinks, but also more powerful fans have been installed. The end result is that the gaming notebooks are supposed to be about 3 decibels quieter than their predecessors.

Already a great display in the base version

We are in the upper mid-range for the Scar family of gaming notebooks. Accordingly, many gamers will already be able to have fun with the basic version. Apart from the selected configuration, Asus ROG always installs an IPS panel with at least 1,920 x 1,080 pixels (Full HD) and a blazing fast refresh rate of 300 Hz. Alternatively, a QHD display with a slightly less fluid 165 Hz is also possible here. 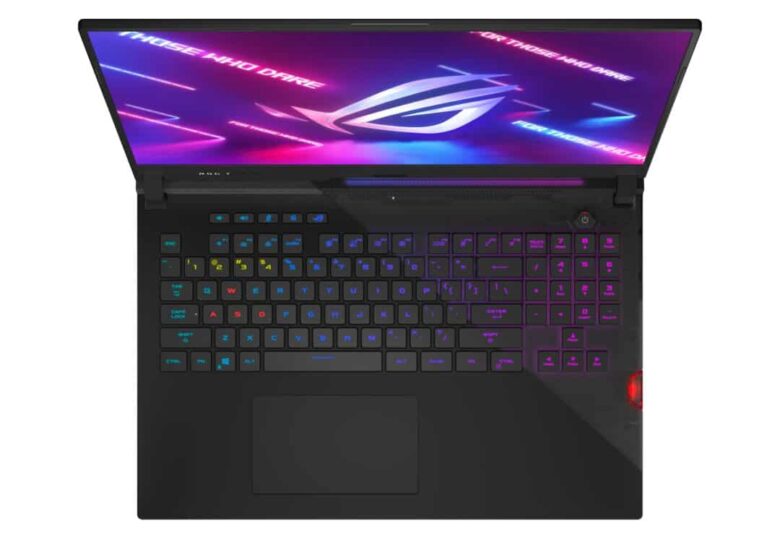 In combination with the response time of just 3 ms, fast-paced shooters should flicker smoothly across the screen even then. On top of that, Adaptive Sync is on board. In the maximum configuration, the gaming notebook comes with a proud 64 GB of RAM. The Scar has at least 1 TB of storage space. Asus distributes this to two individual SSDs. You can also opt for a third SSD. We know this from the predecessor as well as Bluetooth 5.1 and Wi-Fi 6.

Asus ROG installs a much bigger battery in the new edition than it was the case with the predecessors. Instead of the much too weak 66 watt hours, the new gaming notebooks now have a proud 90 watt hours of power available. Thus, the devices of the Scar series should be able to increase the runtime significantly. Asus itself promises a battery life of 12 hours when playing videos. Surprisingly, the larger battery does not have a negative impact on the gaming notebook’s dimensions. Quite the contrary. With 395 mm x 282 mm x 27.5 mm and a weight of 2.7 kg, the dimensions of the Scar 17 are even a bit smaller than the predecessor. We can observe something similar with the 15 incher. It now measures 355 mm x 260 mm x 22.7 (max. 27.2) mm. The weight is 2.3 kg for the smaller model.

The Strix G15 and G17 are more or less slightly slimmed-down versions of the Scar family. Asus ROG equips the gaming notebooks with a Ryzen 5 5600HT and an RTX 3060 with 6 GB VRAM in the cheapest basic version. If you spend more money, you will also get more performance.

Thus, the Strix models are optionally also available with a Ryzen 7 5800H or even a Ryzen 9 5900HX as well as a RTX 3070 with a somewhat stronger 8 GB VRAM. As with the predecessors, you can also choose a maximum of 32 GB of RAM. The same applies for the storage space. Up to 1 TB is distributed over two SSDs.

As with the Scar models, you get a Full HD display with a maximum refresh rate of 300 Hz even in the basic version of the Strix. If the resolution is not enough, you can optionally opt for a screen that resolves with 2,560 x 1,440 pixels. However, you have to accept a somewhat weaker refresh rate of 165 Hz when choosing this sharper QHD resolution.

The Strix models also get a stronger battery from Asus ROG. With its 90 watts, it corresponds exactly to the power from the Scar series. Unlike the more expensive Scar notebooks, however, the larger battery ensures slightly larger dimensions here than in the predecessor.

We don’t have to wait long for the four new gaming notebooks. The somewhat cheaper ROG Strix G15 and ROG Strix G17 are supposed to start at 999 euros and 1,599 euros, respectively, in this country. The Scar will be a bit more expensive. The 15-inch model will start at 1,499 Euros and the 17-inch model at 1,799 Euros.

New Chromebooks from Lenovo: IdeaPad 5i and IdeaPad Flex 5i