Cooling hardware is no longer only used to avoid overheating of CPU or GPU. For many PC hobbyists, a cooler is now also part of the total work of art that a PC system is supposed to represent. Therefore it is not surprising that more and more manufacturers are hitting this notch. Cooler Master now brings a very special piece of technology to the market with its all-in-one cooler called MasterLiquid Mirror. Here, they want to impress with a unique infinity effect.

It is increasingly noticeable that hardware, which was previously only installed for its effectiveness, now also has to fulfill a design aspect. This can be seen particularly strongly in this year’s product range of All-in-One coolers. They should not only cool, but also be visually convincing. The brand new MasterLiquid Mirror series from the manufacturer Cooler Master aims to create a unique design. The focus is primarily on the design of the pump housing. After all, the focus here is on a very special infinity effect. The name does not come from nothing. Thus the lighting of the case looks as if it never ends. What sounds like magic can be explained by means of an ingenious design. Cooler Master achieves “infinity” by using a combination of eight RGB LEDs and a mirrored surface. Since the LEDs can be addressed individually, it is possible to create your own individual design. A corresponding adjustment is made by means of software or the supplied controller. If you want to go a different way, the lighting can be controlled via the mainboard.

The performance is also right

But the cooler of the MasterLiquid Mirror Series does not only look cool. According to Cooler Master, the cooling performance should also be impressive. In particular, the series is said to have improved on three specific points compared to its predecessor products. The first is that Cooler Master now uses a two-chamber system. This should ensure that cold and hot water are separated from each other. In addition, Cooler Master now uses an engine that is quieter than its predecessor. Finally, the manufacturer now uses a reinforced gasket. This increases the reliability of the All-in-One cooler. As a result, the new series should be able to impress with a stronger cooling performance. This can be attributed not only to the higher flow rate, but also to the larger surface area of the fins.

Of course, everything stands and falls with the radiator. After all, it is the radiator that provides the corresponding power in the system. With the MasterLiquid Mirror Series, you can choose between three different radiator sizes. Starting with a diameter of 240 mm, Cooler Master also offers a system with a 280 mm radiator and a version with a 360 mm radiator. Depending on which version you choose, the radiator offers a power of 200, 230 or 280 watts TDP. The largest version not only has the greatest power. It is also compatible with the TR4 socket from AMD. In contrast, the two smaller models are compatible to the common sockets of AMD and Intel. Furthermore, they can be used with the LGA 2011.

The latest all-in-one coolers from Cooler Master can currently be purchased only from Amazon. Unfortunately there is no corresponding delivery date yet. However, the manufacturer would like to distribute the coolers through other dealers in the future. Depending on which radiator size you choose, you will have to pay between just under 110 euros and 150 euros on the counter. Although this is a proud price, it is certainly not too high for many PC hobbyists for a special design. 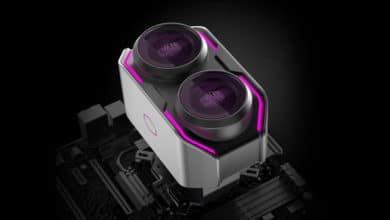