After unpacking, we took a closer look at the case and were very positively surprised that despite the many material transitions, there were no noticeable gaps. Even with a case in this price class, this is not a matter of course, so that a full five stars could be awarded for the workmanship! As you can see on the pictures, the cables of the front panel are already attached to the mainboard tray ex works with cable ties.

In order to be able to present you the equipment graphically, we have used the very good product page of Cougar:

Up to 425 mm long graphics cards can be accommodated in the Cougar Panzer and depending on the motherboard used (Mini-ITX, Micro-ATX, ATX, CEB) up to three pixel accelerators can be installed in the Midi Tower. Installing radiators in the front would reduce the possible length of the graphics card, but any standard card should fit into the housing . 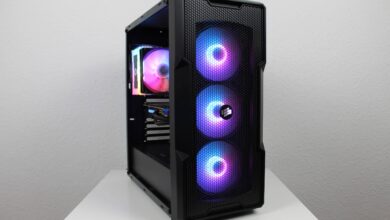