Robot vacuum cleaners make housework much easier. For this reason, the smart household helpers are becoming increasingly popular. If you want to secure a real bargain just in time for Black Friday, we have a tip for you. ROIDMI, an expert in the field of smart household helpers, has two of its most popular models, ROIDMI EVA and ROIDMI EVE PLUS, on offer just in time for the deal month of the year – up to and including Black Friday. We introduce you to the two vacuum robots in more detail.

We were recently able to take a closer look at the ROIDMI EVA as part of our test. As an “all-rounder at a really good price”, it rightly earned our Gold Award. It would be an understatement to call this smart household helper a mere vacuum robot. Rather, it is an all-round carefree package. The heart of the whole thing is the vacuum robot itself. It offers a very good suction power of 3,200 pascals. However, the wiping function is much more exciting. ROIDMI relies on two rotating wiping pads here, which remove even dried-in stains very well.

The 5,200 mAh battery ensures that the robot vacuum cleaner can clean an area of up to 200 m² on one cleaning tour. Another highlight is the large-format suction station. However, this can not only free the robot vacuum from the collected dust. On top of that, it has a fresh and dirty water tank. It not only cleans the two wiping pads and then dries them with hot air, but also supplies the robot’s water tank with fresh water. As part of Black Friday, you can secure the ROIDMI EVA at bargain prices on manomano.de (679.99 euros), myrobotcenter.de (699.00 euros) and Amazon (724.66 euros).

The ROIDMI EVE PLUS was ROIDMI’s debut in the robot vacuum sector. But already in our test in 2021, we could see that the smart household helper rightly earned positive reviews from many sides and laid the foundation for the success story of the Xiaomi subsidiary. In addition to state-of-the-art navigation technology, the robot vacuum also offers a good suction performance, which is expressed in 2,700 Pascal. Its connectivity can easily keep up with current devices as well. Thus, it offers app support and gets along brilliantly with the usual suspects in the field of voice assistants.

The ROIDMI EVE PLUS also comes with a practical suction station. This ensures that you hardly have to worry about the collected dust and other dirt of the robot vacuum cleaner. Only the suction station has to be cleaned of accumulated dust every few weeks. The wiping function may not be able to keep up with the two rotating wiping pads of the ROIDMI EVA, but it still serves its purpose. For Black Friday, the already inexpensive vacuum robot becomes even cheaper. You can buy it for 349 Euros at terra-home.de. 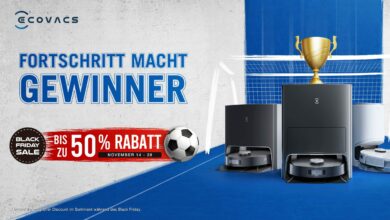 Black Friday: Many bargains from ECOVACS at Amazon

iRobot: Robot vacuum cleaners to be able to detect animal “kick mines” in the future

Robot vacuum cleaners make housework much easier. For this reason, the smart household helpers are becoming increasingly popular. If you want to secure a real bargain just in time for Black Friday, we have a tip for you. ROIDMI, an expert in the field of smart household helpers, has two of its most popular models, … (Weiterlesen...)