In the wake of the corona crisis, the number of home office workers is growing. Naturally, manufacturers are reacting to this. Accordingly, the office expert HP has come up with a suitable monitor for the home. The so-called M-series wants to convince with one thing in particular – its low price. However, the performance also seems to be right at first glance. The optional 24-inch, 27-inch or even 32-inch monitors come with a sharp picture and stable viewing angles thanks to an IPS panel and Full HD. The Eyesafe certificate also certifies that the display is easy on the eyes. However, due to the low price, you also have to do without some features that are now standard on other monitors.

If you take a look at the new M series, one thing quickly becomes clear. The products of the different manufacturers are very similar in their products for the home office. Thus, you can definitely see a certain similarity to the new home office monitors from Lenovo (we reported). HP’s monitors also rely on a simple and above all inconspicuous design. Slim dimensions and very thin screen edges are supposed to ensure that the home office doesn’t get an uncomfortable atmosphere of an open-plan office. Also overlapping is the possibility to hide cables skillfully. HP, like Lenovo, has installed a practical cable guide for this.

We also already know the use of an IPS panel with 75 Hz from Lenovo. This can only be welcomed. However, the Achilles’ heel of HP’s M-series is clearly the ergonomics. You have to more or less adapt to the monitor here. Not vice versa. The screens can neither be adjusted in height nor in tilt. A pivot mode, which is especially useful when editing documents, is also sorely missed. Some people use a separate VESA mount in such cases. However, a serious point of criticism has to be mentioned here. While VESA has become standard with other manufacturers, like Lenovo, you look for it in vain with the monitors of the M-series.

The right size for everyone

At least you can let off steam as you please in the area of screen sizes. HP has something for almost every taste here. The M-series includes the M24f with 23.8 inches, the M27f with 27 inches and the M32f with a 31.5 inch screen diagonal. Since HP relies on a Full HD resolution of 1,920 x 1,080 pixels for all three models, the picture of the 32 incher is not quite as nice to look at as that of the two smaller models. However, with a pixel density of a weak 70 PPI, this is not surprising. All three monitors offer an 8 bit color depth as well as a brightness of 300 cd/m². The latter is supposed to result in a contrast ratio of 1,000:1, which is typical for IPS panels, thanks to good black levels. The screens are supposed to be able to cover the sRGB color space by 99 percent. Those who activate the so-called overdrive (electronic acceleration) should be able to benefit from response times of 5 ms. However, the 32 incher seems to be at a disadvantage here as well. This one should only be able to offer 7 ms.

HP also seems to follow Lenovo’s example in terms of ports. However, this does not contribute to a positive result. You look for practical DisplayPort here in vain. Instead, you have to be satisfied with an HDMI 1.4 port. However, the two larger models with 27 and 32 inches offer two of the ports. Beyond that, HP also installs VGA/D-Sub. During the presentation of the three screens, it became clear what HP focused on when designing the M-series. Eye-friendly work thanks to the Eyesafe standard and the use of recycled materials seem to be particularly important to the company. Accordingly, it’s not surprising when the company proudly speaks of the “World’s first Eyesafe certified monitor series made with recycled ocean bound plastics”.

The Eyesafe standard is a sophisticated technology designed to protect the eye from unhealthy blue light. Especially people who spend long hours in front of PC monitors every day will know that, over time, this blue light can lead to sore eyes and, eventually, excruciating headaches. As the Eyesafe standard reduces the short-wave blue light, even long monitor sessions are no longer a problem. On the other hand, HP should not boast too much about environmental protection. After all, the majority of recycled materials are not taken from the ocean. Instead, a closer look reveals that HP only takes 5 percent from the world’s oceans and expands this with 85 percent classic recycled plastic. The advertising campaign seems somewhat misleading in this respect. But recycling is recycling. For this reason, HP has to be praised here.

HP has a real price-performance tip up its sleeve with the M series. For example, the smallest monitor with a 24-inch screen diagonal is said to be available starting at $139. HP has not yet revealed how much the larger models will cost. The three monitors are supposed to be launched on the market in March. Users who do not attach too much importance to ergonomic features and many connectivity options will certainly be happy with decent monitors at a good price. 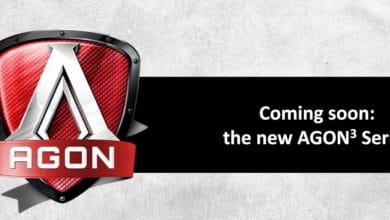