To install the Grandis 3, attach the mounting rail with the spacers to the backplate. Then fix the cooler on this rail with two screws and insert the fans. Due to the fact that the middle fan can only be pushed in from the side, this leads to minor complications when installing directly in the case – in my case, I first had to remove the graphics card in order to have the required space. Unfortunately, the mounting brackets don’t hold the fans by themselves – so a bit of tact is necessary. Once the cooler is finally fixed, there is no wobbling and no problems.

Due to the symmetrical structure, however, there are limitations in RAM compatibility. If you use bulging RAM heatsinks, you have to move the front fan upwards. Possible RGB modules are thus completely covered. If you move the cooler upwards, you have to expect a higher overall height – here you have to check if there is enough space in your own case. With RAM modules of normal height there are no restrictions.

In order to test the Grandis 3, we had it compete against the EKL Alpenföhn Matterhorn Pure as a very good 120 mm single tower cooler and the Fuma 2 as a direct competitor in terms of price.

The test system consists of a Ryzen 5 3600, which is enthroned on a MSI X570-A Pro. The whole thing is built with 16 GB RAM and a GIGABYTE RX 5600 XT GAMING OC in a Fractal Design Define 7. A good case ventilation was provided by some Wing Boost 3 ARGB. For better comparability, identical thermal paste was used everywhere – in this case the Arctic MX-4.

The test scenario is a high CPU load by Prime95 with the “In-Place FFTs” – due to this the load is also constant and gives us comparable values. First of all, it should be said that the 3000 series gets very hot in this scenario due to Ryzen. This is due to the 7 nm technology and the resulting hotspots on the heatspreader. In normal gaming mode, the CPU is of course much cooler – even at low speeds. However, this test scenario shows how powerful the coolers are.

I decided to do the tests at 50% PWM and 100% PWM. 50% PWM is a good “everyday value”, where the fans should not be too loud under normal load, but keep the CPU cool enough. We then see the maximum potential at 100% PWM.

The Grandis 3 leaves the Fuma 2 behind it minimally in terms of performance – but with an identical heatpipe construction and a larger fan in the middle, this was foreseeable. So here you have slightly more potential to get the maximum out of your CPU. In terms of volume, the Grandis 3 can easily compete with the Fuma 2 – at 50% PWM it is significantly quieter than a Matterhorn Pure and even at 100% PWM the Grandis 3 is comparatively quiet – audible, but without any noise. 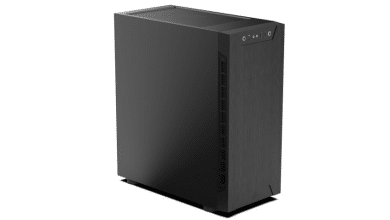 be quiet! dares to use ARGB lighting: the Pure Base 500DX