Online mail order giant Amazon has introduced the latest generation of its popular Echo speaker. The Alexa speaker completely changes the design of the previous devices. While these always came as a pillar, Amazon now uses a sphere design. But the changes do not only affect the appearance of the Echo. In addition, the smart loudspeaker now receives a neutral processor, which is to be called Amazon AZ1. This offers revolutionary functions.

Strictly speaking, the echoes of the past were not really smart. The intelligent answers were provided by Amazon’s sophisticated cloud. But now the Echo gets its own processor. The AZ1 neural-edge processor relies on “machine learning”. In this way the loudspeaker itself gets to know its user better bit by bit. This should lead to a pleasingly short response time of the speaker with continuous use. After all, not every single command has to be chased through Amazon’s cloud, but can under certain circumstances be processed by the speaker itself. This makes simple commands such as controlling smart home elements easier. In the course of the new processor, a completely new speech recognition system is also to be used.

Amazon has not only completely revised the form itself. Other design aspects now look different as well. The pulsating ring of light has moved downwards. Moreover, Amazon promises a better sound with the new generation. Two tweeters and a 76 mm woofer are to ensure this. The latter has not changed in size compared to its predecessors (Echo and Echo Plus). Of the tweeters with 20 mm size there was only one in the old models. Amazon refers to this as “Dolby sound workmanship”. 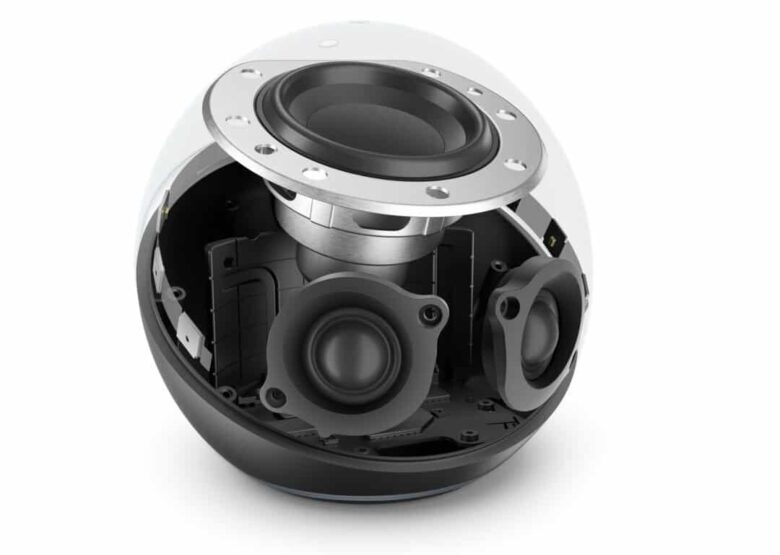 Alexa in the future also possible in dialogs

Until now, one could only talk to Alexa in person. Be it a question about the weather or a bad joke – Alexa always had the right answer at hand. However, it was necessary to mention the word “Alexa” or “Echo” before each new command. Only then the AI was ready to accept commands. Now, however, you can even involve Amazon’s AI in conversations with other people. All you have to do is ask the speech assistant to participate in the conversation. Now the assistant no longer needs the code word. Instead, Alexa should be able to listen in a context-sensitive way and notice when one of the conversation partners gives her a command. That sounds impressive in theory. However, it remains to be seen whether the language assistant will really notice if you speak to her or one of the people present.

Thanks to the new Echo, you should no longer need an additional bridge to control your smart home devices. The integrated Zigbee hub makes this possible. Thanks to the hub, the Echo can control any compatible smart home device itself. The new Echo also adjusts the sound. It uses the microphones that are located in the environment.

Jeff Bezos seems to want to take a similar line to Apple. So Amazon is now also focusing on sustainability. This strategy already became clear when the company started its purchase of old Amazon devices. But the company no longer wants to pursue this goal only in the production and recycling of the devices. It also wants to make the simple operation of the devices more environmentally friendly. Accordingly, the new echoes are to be given a so-called low-power mode. In this mode, the power consumption of the loudspeaker is to be reduced when it is not in active operation.

As a user you should also be able to check how much power the echo actually consumes. For this, a look into the Alexa App is sufficient. A specially created energy dashboard shows not only how much the echo actually consumes. It also shows the energy consumption of the other smart home devices. Of course, this assumes that the devices are compatible. If the result is not satisfactory, Alexa should be able to make appropriate suggestions on how to save electricity. However, this energy dashboard will initially only be available in the United States.

The new Echo should be available in the colors blue-gray, white and anthracite. Since yesterday you can pre-order the now spherical Smart-Speaker. In Germany, the new generation of the Echo is to cost 97.47 Euro. The regular UVP without value added tax reduction will be accordingly with 99,99 euro. Amazon would like to deliver the new Echo still this year.

AVM FRITZ!DECT 200 in the test – quite smart power socket

Ultenic D7 – a special vacuum robot in the test