Apple has filed an exciting patent with the US Trademark and Patent Office that could herald the futuristic future of the MacBook. The notebook is largely made of glass, offers a virtual trackpad surface and features illuminated icons. Just recently, the Cupertino-based company unveiled the new MacBook Air 2022 and MacBook Pro 13 2022, which rely on the new M2 chip.

Patent filed for MacBook made of glass

A MacBook made of glass? What currently still sounds strongly like dreams of the future, could soon become reality. Anyway, Apple has filed a corresponding patent (with the Number 11,372,151) was submitted, as PatentlyApple reports.

Here, the notebook relies on an additional illuminated surface made of glass, which is capable of displaying icons and could represent where you can position your iPhone on the MacBook to charge it inductively through the notebook.

The concept picks up elements from another patent Apple submitted back in August 2021. It described a virtual trackpad and the ability to inductively charge iPhones.

The new patent application here covers systems, devices and techniques relating to an electrical device that provides an illuminated case and defines a “dynamic input position.” This is defined by an outer shell or surface comprising a transparent layer or structure.

Said surface can apparently be selectively illuminated to display a customizable input area like a virtual trackpad and additionally show various visual indicators in the area around the trackpad.

Different techniques are apparently used for this. In a first example, the translucent surface is illuminated from the side by a light-emitting element. This directs the light into the area to show the outer boundaries of the virtual trackpad.

In another example, the surface is illuminated from below to represent a configurable and customizable boundary of the input area. It should then even be possible to move the trackpad, adjust the size or change the functions.

In addition, other visual elements should be able to be displayed around the trackpad. Dynamic or customizable information about the MacBook itself is also mentioned as an example.

According to the patent, if an inductively chargeable device such as an iPhone or Apple Watch is near the notebook, a charging icon will be displayed in the lower left corner. If you place your device on it, it will automatically charge wirelessly.

In development for years

Apple has reportedly been working on the glass MacBook for at least five years. Back in February of this year, another patent revealed the ability of a corresponding translucent notebook to display illuminated icons on its glass-like surface. Among them, for example, a power button or controls for media control. It already goes back to the year 2027, which shows how long Apple has been working on such technologies.

As always, the patents rather show the possibilities of what can be realized. If, when and in which form en MacBook made of glass will ever be realized is unclear. However, the concept is always exciting. 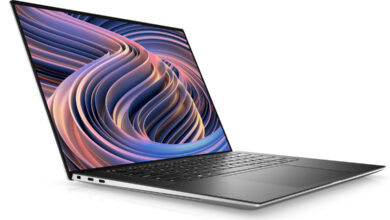 You can now also track Apple AirTags via Android

Apple has filed an exciting patent with the US Trademark and Patent Office that could herald the futuristic future of the MacBook. The notebook is largely made of glass, offers a virtual trackpad surface and features illuminated icons. Just recently, the Cupertino-based company unveiled the new MacBook Air 2022 and MacBook Pro 13 2022, which … (Weiterlesen...)