The 17-inch ASUS ROG Zephyrus S17 is equipped with an 11th-generation Intel CPU, with a maximum of a Core i9-11900H to choose from. An Nvidia GeForce RTX 3080 with 16 GB of dedicated graphics memory provides the necessary graphics power in the strongest features.

Up to 32 GB of dual-channel DDR4 memory and up to 2 TB of NVMe PCIe SSD storage round out the exciting package. Thanks to the simple upgrade design, all components can be easily upgraded. An innovative mechanism with a special pop-open screw makes it easy to remove the panel on the bottom of the notebook. Two M.2 SSD slots are available for upgrading. In addition, an open SO-DIMM slot complements the space-saving onboard RAM.

Here, the ASUS ROG Zephyrus S17 relies on a NanoEdge display, which is available in two variants: with WQHD resolution, 165 Hz refresh rate and NVIDIA G-SYNC or with 4K resolution and 120 Hz panel. The latter configuration is primarily aimed at content creators and offers a particularly high brightness of 500 nits. Both display models offer an ultra-fast response time of 3 ms and are PANTONE validated. The notebook’s keyboard is also innovative, as it can be raised slightly at the top edge to allow effective air circulation for the AAS+ cooling system.

The ASUS ROG Zephyrus M16 gaming notebook is no less high-performance. It relies on a particularly narrow display bezel and offers a screen-to-body ratio of 94 percent. The WQHD display with 165 Hz refresh rate and 3 ms response time has an aspect ratio of 16:10 and is also particularly bright with 500 nits.

At its most powerful features, the ROG Zephyrus M16 has NVIDIA GeForce RTX 3070 graphics with 8 GB of dedicated graphics memory, an Intel Core i9 11900H processor and up to 32 GB of RAM. For ultra-fast storage, the ROG Zephyrus M16 is equipped with up to 2 TB of NVMe PCIe SSD storage. Yet it remains ultra-compact and offers flexible options for gaming, work and entertainment with a weight of just 1.9 kilograms and a 180° hinge.

Both gaming notebooks also feature numerous options for fast and versatile connectivity, including a Thunderbolt 4 USB Type-C port with charging capability. The camera with 3D Noise Reduction technology is said to offer compelling image quality even in low-light conditions. Dolby Atmos sound with six speakers and WiFi 6 are also on board. 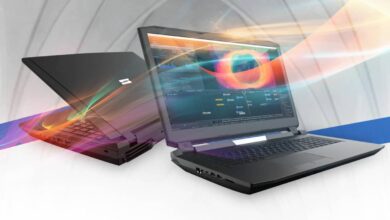