In May, they officially introduced the powerful and chic Asus ROG Flow X16 gaming convertible notebook. As the manufacturer now announces, the laptop is now available in stores.

The gaming convertible Asus ROG Flow X16 combines brute performance with a classy and compact design. Inside the notebook works a maximum of an AMD Ryzen R9-6900HS processor, as well as a NVIDIA GeForce RTX 3070 Ti graphics card at its peak. The graphics performance can also be increased even further with the optional ROG XG Mobile eGPU.

The MUX Switch ensures optimal frame rates tailored to the user’s demands – whether high-performance gaming or even longer battery life. Add to that up to 32 GB of fast DDR5 RAM clocked at 4,800 MHz and up to 2 TB of PCIe SSD Gen4 storage.

To ensure that the performance is also permanently available, the innovative liquid metal cooling system reduces the CPU and GPU temperature very effectively. This way, all components of the gaming powerhouse are cooled efficiently and evenly. A Vapor Chamber over the CPU and GPU, the unique Frost Force technology, and the Pulsar heatsink keep the temperature at its optimal level even during the heaviest use.

Moreover, during not too demanding tasks, the fans switch to 0dB operation and do their work absolutely silently, as the manufacturer promises.

Up to 1,100 nits, the gaming notebook gets bright at its peak while offering a low response time of just 3 ms. Thanks to an almost bezel-less NanoEdge design, almost the entire size of the laptop is available as a screen surface.

As a convertible notebook, you’re naturally extremely flexible with the Asus ROG Flow X16. Robust 360-degree hinges allow you to flexibly use the device as a tablet, classic notebook or in tent mode.

Thanks to the Gorilla Glass 3 touchscreen, the 16-inch convertible is particularly scratch-resistant and is equally suitable for working or entertainment with its generous 16:10 format and stylus support.

The 16-incher weighs 2,100 grams and is also quite slim with only 19.4 millimeters. In return, you can expect a battery with a capacity of 90 watt hours, which is quickly recharged via USB-C thanks to the 100-watt fast charging function. According to Asus, the battery should last up to 10 hours. Ultra-fast data rates and modern WiFi 6E ensure stable, fast and reliable network connectivity.

The Asus ROG Flow X16 gaming convertible is available in stores now. The manufacturer’s MSRP is 2,499 euros upwards, then with R7-6800HS, 16GB RAM, 1TB SSD and RTX3060. Amazon lists the notebook with the same specs, but 32GB RAM, for 2,699 euros. More details can be found on the official product website. 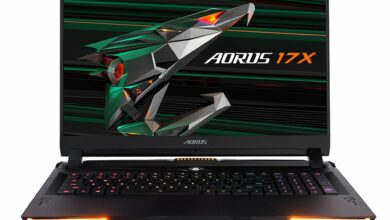