As part of the Chronos Summit 2022, manufacturer Cooler Master unveiled a variety of new hardware and peripherals, including a PC case with a sneaker look. However, the two new gaming monitors Cooler Master GP27-FQS and GP27-FUS, which rely on bright mini LEDs, also turn out exciting.

At the same time, both gaming monitors feature a mini-LED backlight with 576 separately adjustable dimming zones for a particularly bright picture. When displaying HDR content, the maximum brightness is a full 1200 cd/m².

Thanks to a Quantum Dot film, a DCI-P3 color space coverage of 97 percent is also achieved. Thus, the GP27-FQS and GP27-FUS receive a DisplayHDR 1000 certification. According to Cooler Master, both models achieve a response time of 1 ms for gray changes (GtG), as well as a color depth of 10 bits for the GP27-FQS via FRC simulation. This should theoretically also apply to the GP27-FUS, but the data sheet officially speaks of 8 bits.

In terms of design, the Cooler Master GP27-FQS and GP27-FUS gaming monitors do not differ from each other. Among other things, RGB LED lighting on the back is also offered.

However, there are differences in terms of connectivity. The GP27-FQS relies on one DisplayPort 1.4 and two HDMI 2.0, while the higher-resolution GP27-FUS has DisplayPort 1.4 with DSC support as well as two HDMI 2.1 and can thus also render a 4K image with 120 FPS on PS5 and Xbox Series X.

In addition, there is a USB-C port with 90 watts of Power Delivery, two USB-A ports and integrated 2-watt speakers in both monitors. AMD FreeSync Premium, as well as convenience features like a height adjustment, tilt and swivel round out the scope.

The manufacturer has yet to provide details on the availability and pricing of the Cooler Master GP27-FQS and GP27-FUS gaming monitors. The market launch should take place in the coming months. 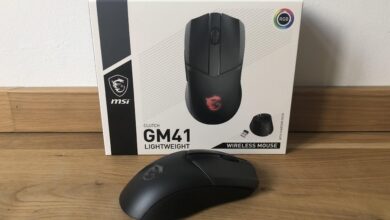