The Chinese case manufacturer Jonsbo has once again presented a case masterpiece that is available in two versions. The high-end cases of the TR03 series are brimming with futurism and noble design. Among other things, they offer space for numerous fans, an ATX mainboard as well as a graphics card of 460 millimeters in length. The shape and good workmanship of the aluminum are particularly striking – just as you would expect from a high-quality showcase.

Steep curves with and without front view

The two TR03 variants are characterized primarily by their triangular shape. The corners are rounded on the left and right side, giving the cases a designer look. A tempered glass panel allows a view of the interior of both cases in the series.

Features of the TR03-A version include a closed front, while the TR03-G is equipped with an additional glass panel. This makes the built-in radiator visible. Features such as RGB lighting make the case even more futuristic.

Both case versions are available in black and grey aluminum. In addition, an I/O panel is built in, which offers an audio input and output as well as an on/off switch, two USB 3.0 ports of type A and one USB 3.0 port of type C.

Despite the triangular shape, the TR03 showcases offer plenty of space. Above all, there is enough space to accommodate an ATX mainboard. In addition, one has the choice between a horizontal or vertical mounting of a graphics card with a maximum length of 460 mm. A stabilizing bracket for this is already included in the case.

A power supply unit in ATX format gets space underneath on the bottom of the case. This leaves enough space for up to five 2.5 or 3.5-inch plates as well as for up to 10 fans, each 120 millimeters in diameter and a 360 radiator for water cooling. Two 120 mm fans are already included.

Once all the fans have been installed, a TR03 case can show its best side. This not only allows a perfect dust-free air supply through filters, but RGB fans can also make it shine.

If you want to be the proud owner of a TR03 case, you have to dig deep into your pocket. Both variants are available now for about 245 Euro. 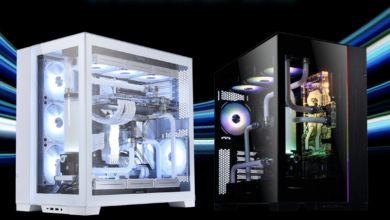 Large mini-ITX case from Jonsbo – the V9 is coming