With the OKAI Ranger, the manufacturer presents a new fat-tire e-bike. It has a maximum power of 1,000 watts, offers a range of up to 72 km and can carry a load of up to 150 kg. Visually, it is somewhat reminiscent of the Engwe X26, which was recently unveiled.

Manufacturer OKAI has unveiled a new e-bike. The OKAI Ranger is a fat-tire e-bike with a relatively flat, blue frame, which wants to convince with its inner values. Also offered is a high level of riding comfort, which also wants to convince in open terrain.

This is ensured by the 26 “x4” fat tires, which together with the suspension on the front wheel should compensate for unevenness. Mechanical disc brakes front and rear are also part of the features of the robust e-bike, as well as particularly bright LED “ambient lights” at the front, as well as at the rear.

The Ranger is powered by a Banfang motor on the rear wheel, which draws a maximum of 1,000 watts of power and runs at an average of 750 watts. This achieves a maximum speed of 32 km/h, which means the e-bike is not approved for public road use in Germany.

The OKAI Ranger installs a battery from the house of Samsung, which comes along with a capacity of 705 Wh and is to realize a range of 45 miles (about 72 km). The technical features of the e-bike are also interesting.

For example, the handlebars house a comparatively large LCD touch panel that can be used together with the OKAI app. It provides information about the range, distance covered and lets you unlock the battery for charging. Unlocking is also done via NFC key or via Bluetooth.

Another special feature: before driving, a self-diagnostic test can be performed via the smartphone app, which provides information on component temperatures, battery status and motor or brakes.

The OKAI Ranger can be purchased in the US directly from the manufacturer. The MSRP is $1,999, but there is currently a $100 discount on the price for another week. The EU site, to which one is normally redirected, does not list the e-bike at all.

If and when the Fat Tire e-bike, possibly adapted, will also be offered in Germany is not yet clear. However, OKAI also offers e-bikes and e-scooters in this country, including the NEON scooter, for example.

VanMoof S5 and A5: New edition of the cult E-bikes comes with exciting innovations 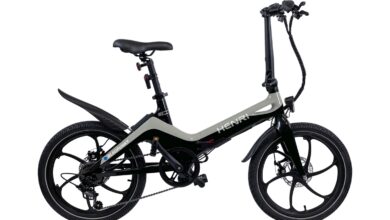 With the OKAI Ranger, the manufacturer presents a new fat-tire e-bike. It has a maximum power of 1,000 watts, offers a range of up to 72 km and can carry a load of up to 150 kg. Visually, it is somewhat reminiscent of the Engwe X26, which was recently unveiled. OKAI Ranger in detail Manufacturer … (Weiterlesen...)