Roborock wants to make you happy with a new vacuum robot so that you can put your feet up during the upcoming spring cleaning. The Roborock Q7 Max+ heralds the new Q series. It is supposed to be cheaper than the flagships of the S-series, but Roborock wants to score with a great value for money. At the market launch, there is still a special offer for the model.

Many similarities with the flagship

The strategy sounds quite understandable. In addition to its high-priced flagships of the S series, the smart home experts from Roborock now want to establish a middle class in the form of the Q series. But does reaching for the new Q7 Max+ mean sacrificing many features? From first appearances, this does not seem to be the case. But let’s just take a closer look at the robot vacuum. One thing in common with the top model in the form of the S7+ is already the dirt bin.

It can hold up to 470 ml of dirt. The Q7+ even outperforms its big brother in the water tank area. With a filling capacity of up to 350 ml, it is larger than the flagship. The functionality is the same as that of the S7+. There is a wiping unit at the back of the vacuum, which is supposed to provide detailed cleaning via special vibration technology. Vacuuming is performed at a power of up to 4,200 Pa.

Weekly emptying of the dirt container is not necessary

As we already know from S7+, the plus sign also stands here for the separate dirt container, which forms a unit with the docking station. The collected dirt is simply vacuumed and collected here after a cleaning tour. The big advantage of this is that you don’t even have to empty the robot vacuum itself. According to Roborock, the volume of the emptying station should be so large that you only have to empty the integrated collection container every seven weeks.

To enable the operation of the Q7+ conveniently from your smartphone, Roborock of course also offers the appropriate app here. This ensures that you can control and monitor the squeegee even from vacation or work. But the smartphone application can do even more.

Since The Q7+, like the S7+, also has LIDAR sensors, it will create a detailed map of your home. Of course, you should also be able to operate the smart household helper conveniently via button control on the device itself. A corresponding parental lock then protects you from unwanted cleaning trips.

In theory, this already sounds promising. After all, the Q7+ apparently offers almost the comprehensive performance package that makes the S7+ the best suction mopping robot on the market for many. According to Roborock, a few minor features should be omitted, but whether these really hurt in the eventual application remains to be seen. The Roborock Q7 Max+ is available for pre-order now, just like the Q7 Max (without suction station) on Amazon. Delivery will then take place in April. From April 4 to 10, pre-orderers will still receive a special discount, so the Q7 Max+ is available for 599€ and the Q7 Max for 399€.

Yeedi Vac 2 Pro in the test: What can the price-performance cracker? 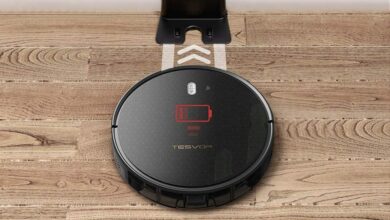 Roidmi Eva review: An all-rounder at a really good price

Roborock wants to make you happy with a new vacuum robot so that you can put your feet up during the upcoming spring cleaning. The Roborock Q7 Max+ heralds the new Q-series. This is supposed to be cheaper than the flagships of the S-series, but Roborock wants to score here with a great value for … (Weiterlesen...)