With the Kone Pro and Kone Pro Air models, ROCCAT introduces two new gaming mice at once, which continue the Riehe that has existed since 2007 and rely on the proven design.

Kone Pro: One of the lightest gaming mice on the market

The Kone Pro is said to be one of the lightest gaming mice on the market: The device weighs in at just 66 grams. The low weight is achieved by the honeycomb structure of the mouse’s casing. However, the heart of the particularly light mouse is the Owl Eye optical sensor, which enables a resolution of up to 19,000 dpi. The mouse is also equipped with buttons that rely on Roccat’s Titanium Optical Switch technology and are supposed to process strokes particularly quickly, as well as a mouse wheel made of aluminum. ROCCAT itself speaks regarding the buttons of a 100 times shorter response time compared to conventional mechanical switches.

The mouse is further equipped with AIMO RGB lighting and can only be used wired. The recommended retail price is around 80 euros.

The Kone Pro Air gaming mouse, which was also presented, is ultimately a wireless version of the previously presented Kone Pro. Due to the integrated battery, however, the mouse is noticeably heavier than its wired counterpart: It weighs 75 grams. However, this also makes it one of the lightweights on the market. The Kone Air Pro can be connected to the PC via wireless or Bluetooth. A full battery charge lasts for more than 100 hours, as long as you play continuously. The battery’s quick-charge function also ensures a charge within ten minutes, which should still be enough for five hours of gaming pleasure. The recommended retail price is around 130 euros.

Both models can be synced with other AIMO devices and will be available May 16 in Arctic White and Ash Black color options. 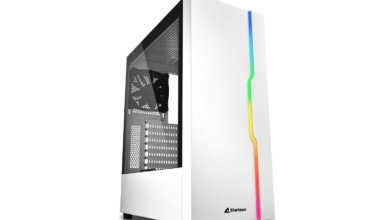