The Volkswagen Group is launching the Skoda Enyaq Coupé iV, a brother of the VW ID.5. In terms of design, the SUV with electric motor (E-SUV) follows in the footsteps of the VW ID.4 and Audi Q4 e-tron and, as Skoda’s first electric car, also comes as an RS variant with a whopping 299 hp.

Skoda is relaunching its Enyaq iV e-SUV as a coupe, combining the size and ground clearance of a classic SUV with a flat roofline and huge wheel arches complete with 19-inch wheels.

In the Volkswagen Group, the Audi Q4 e-tron and the VW ID.4 and ID.5 models were considered pioneers, and now the Czech subsidiary Skoda is following suit with the Skoda Enyaq iV Coupé. Its already preceding E-SUV variant is available starting at a price of 34,600 euros, but only in conjunction with months of waiting.

The new coupe turns out to be slightly longer than the normal Enyaq (4 mm longer) and is two millimeters taller in the process. Width and wheelbase are identical, however. The coupe has a length of 4.65 meters and a height of 1.622 meters. The most striking design difference is a redesigned front apron and side sills painted in body color.

The trunk volume of 570 liters is slightly smaller than in the SUV brother, which holds 585 liters. As standard, the Enyaq iV Coupé also offers a glass roof, which, however, cannot be opened compared to the SUV.

There is a choice of two battery sizes, two powertrain variants and four power levels for each of the coupes. However, the iV 50 variant of the Enyaq SUV is surprisingly not offered on the coupe.

In addition, the e-SUV coupe is offered in two all-wheel-drive variants, which have an additional electric motor on the front axle. The Enyaq Coupé iV 80x produces 195 kW, while the top-of-the-range Enyaq Coupé RS iV with 299 hp (220 kW) marks the first RS Skoda with an electric motor.

Skoda is still keeping a low profile on the range of the models. Only the range of the Enyaq iV 80 Coupé is stated and titled at 545 km, which is still about 16 km more than its SUV counterpart of the same power.

In fact, the Skoda Enyaq Coupé RS iV marks the first RS model from the manufacturer to be equipped with an electric motor. In typical RS fashion, the model features a red contrasting reflector below the rear apron across the entire width of the vehicle and gets its own “sportier” front apron.

The RS variant is also equipped with a sports suspension that lowers the E-SUV coupe by 15 mm at the front and ten millimeters at the rear. There are also 20-inch rims as standard with the option of 21-inchers, as well as front headlights with full LED matrix technology.

The Czech automaker has not yet provided any information on the pricing and availability of the Skoda Enyaq iV coupe. However, it can be assumed that the coupe is likely to be minimally more expensive than its SUV brother. The RS Coupé is expected to be launched in spring 2022, with the other variants to follow. 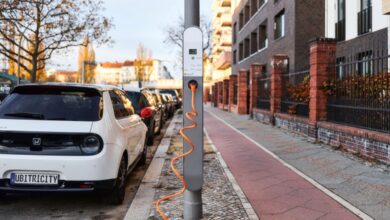 Charging an e-car at a lamppost: Ubitricity makes it possible in Berlin

Semiconductor crisis: BMW does without touchscreen

The Volkswagen Group is launching the Skoda Enyaq Coupé iV, a brother of the VW ID.5. In terms of design, the SUV with electric motor (E-SUV) follows in the footsteps of the VW ID.4 and Audi Q4 e-tron and, as Skoda’s first electric car, also comes as an RS variant with a whopping 299 hp. … (Weiterlesen...)