The Flash Memory Summit 2022 was all about new SSDs and platforms like Phison X1 or the Sabrent Rocket 4 Plus G, which are faster and/or more energy efficient than their predecessors. But SSDs are by no means as climate-friendly as one might think. In fact, SSDs produce nearly twice as much CO2 emissions as mechanical hard drives.

SSDs are harmful to the climate

There’s a dirty secret behind the supposedly clean and energy-efficient modern SSDs. That’s what at least two researchers from the University of Wisconsin-Madison and University of British Columbia have now discovered and jointly proved in their execution. Together, they presented the findings at the HotCarbon 2022 Workshop.

In their research, Swamit Tannu and Prashant J Nair compared various hard disc drives (HDDs) to SSDs and also provide tips in the paper to further improve the lifespan of modern SSDs.

They ultimately aimed to compare an HDD and SSD with a storage capacity of 1 TB over a period of five and ten years and concluded that while the energy consumption of SSDs was significantly lower (56.9 kWh for an SSD over five years of use versus 183.9 kWh for an HDD), the combined CO2 emissions were significantly higher over the same period.

According to the study, an SSD emits 184 kg of CO2 over 5 years, whereas an HDD with the same capacity emits only 99.6 kg. According to the researchers, the much higher proportion of carbon used in the production of SSDs is a decisive factor here.

To do this, the researchers say they compared 94 LCA reports of SSDs to better understand the carbon footprint. For the comparison, they calculated a so-called storage embodied factor (SEF), which represents the rate of CO2 emissions with the capacity of the storage medium.

“HDDs are more bulky and require more material in manufacturing. Therefore, one might think that manufacturing would require more CO2 emissions compared to SSDs. However, our analysis of 24 published LCA reports shows that exactly the opposite is true,” the researchers said.

While most CO2 emissions are generated in the production of SSDs, it is exactly the other way around for HDDs. These are significantly less harmful to the climate in production, but in the long term will require more CO2, they said.

Extending the service life of SSDs

Accordingly, the service life of SSDs would have to be further improved in order to be able to compensate for the high emissions during production in the long term. To this end, the research duo shares four possible approaches that are primarily aimed at storage media manufacturers.

They include, for example, the use of single-level cells (SLC) as opposed to mutli-level cells (MLC). For example, discarded MLC devices could be recycled and reused – with lower capacity – as SLC. More efficient error correction (ECC) would also improve the life of SSDs in the long run.

However, no attention is paid in the research to the aspect of speed. SSDs write and read significantly faster than the fastest HDDs on the market. Of course, this also has an impact on the climate, especially in terms of the power consumption of systems, which have to run much longer than in the case of an SSD due to the slower write and read processes of mechanical hard disks. 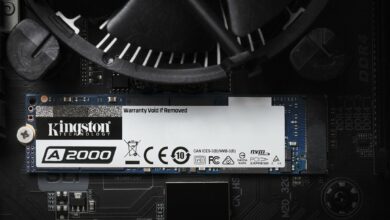 The Flash Memory Summit 2022 was all about new SSDs and platforms like Phison X1 or the Sabrent Rocket 4 Plus G, which are faster and/or more energy efficient than their predecessors. But SSDs are by no means as climate-friendly as one might think. In fact, SSDs produce nearly twice as much CO2 emissions as … (Weiterlesen...)