A stable power supply is also needed for camping trips or when working in remote locations. In most cases, this can only be provided by gasoline-powered generators, which, however, are not particularly conducive to the well-being of the environment or one’s own health and, moreover, are anything but inexpensive to operate. Jackery specializes in alternatives for such gensets and sells solar-powered power stations that ensure mobile power supply in an environmentally and health-friendly way. We were given the opportunity to test the Explorer 240 power station and, of course, didn’t pass up the opportunity. How the device works, what needs to be considered during operation and whether we can recommend it, our test report reveals.

The power station presents itself as very massive – and also feels that way. With a weight of three kilograms, it is less suitable for long hikes – but just bearable. The box comes in black and orange. Pure design elements are – unsurprisingly – largely omitted. The upper side of the box is occupied by a large carrying handle, which is very solid and allows carrying without restrictions. Various connection options and a display are found on the front.

Overall, the device appears very sturdy and solidly manufactured to us in the test. The design is simple and functional, which seems appropriate for the intended use of the power station. Optionally, a solar panel can also be ordered, so that you can also charge on the go.

A power adapter and a car adapter are included in the scope of delivery. The battery with a total of 240 watt hours or 67,000 mAh can be charged via the mains or the car battery. The charging times hardly differ. The box needed about 5.5 hours to fully charge on the mains (max. 60 watts) in our test. In the car it takes about 6.5 hours (12V, 10 A, 120 watts). You can also charge the power station with the solar panel, of course, although you are dependent on solar radiation here. We reached a maximum of 70 watts with the Saga 100 with up to 100 watts and were able to slowly charge the Powerstation while we worked with a laptop.

However, it should be mentioned here that a full charge is not necessarily needed. Besides that, you can also charge the power station during use. If you only want to charge your cell phone or other smaller devices on the road, you do not need to fully charge the box. However, the situation is different if it is to supply an entire caravan with power or is responsible for the continued operation of the refrigerator in the event of a power outage.

The display shows the current input and output power in addition to the current charge level, so you have a good overview of consumption.

Equipped is the power station with different connection options: In addition to two USB ports (2.4 A each), a 230-volt socket is available. This is to ensure that devices with different power requirements can be connected. Meanwhile, all charging blocks can be activated individually. In testing, this setup of the power station proved to be extremely practical: While smartphones can be charged without any problems via the USB plugs, a laptop has to be plugged into the 230-volt socket during operation.

In addition, we noticed two safety mechanisms in a positive way. As soon as the device gets too warm due to load, a fan automatically switches on, which protects the device from overheating. Unfortunately, the fan is clearly audible and it already switches on from about 25 watts. Furthermore, the power supply is automatically cut at critical load to avoid short circuits or other incidents. This can happen quite quickly with this model, as it is only designed for 200 watts continuous load (400 watts peak). Many devices therefore fall out, electric grills, for example, need around 1000 watts. The Explorer 1000 is more suitable for this. Gaming PCs under full load won’t be able to use it in the garden either – but a laptop should fit.

The display integrated into the power station is also helpful. It not only shows the battery charge status, but also provides information about how much energy is currently being consumed. This makes it possible to see at a glance how long the charge of the power station will last. The demand of individual devices can also be quickly recognized in this way, provided that the device is operated individually.

Fully charged, the energy provided is easily enough to charge a standard smartphone numerous times. Three laptop charges were also possible without problems in the test. The transparency ensured by the display should also be positively emphasized here: Jackery’s specifications regarding the available power can thus be easily checked – and proved to be accurate in the test.

Overall, this is an extremely powerful device that could convince us in the test. With its robust design, large battery, various charging options and transparent display of battery charge and output power, the Explorer 240 power station offers everything we expected from it. The extras and the safety mechanisms as well as the reasonable price-performance ratio should also be emphasized: We can recommend the power station if the performance is sufficient. Otherwise, you should reach for the larger models.

A powerful power station that can optionally even be charged during operation via solar panel.

Zendure SuperBase V review: This is how good the Kickstarter power station is 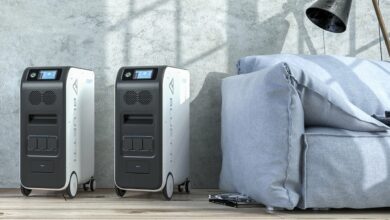 A stable power supply is also needed for camping trips or when working in remote locations. In most cases, this can only be provided by gasoline-powered generators, which, however, are not particularly conducive to the well-being of the environment or one’s own health and, moreover, are anything but inexpensive to operate. Jackery specializes in alternatives … (Weiterlesen...)