The scope of delivery of the Shunzao Z11 Max turns out to be pleasingly lush. This is hardly surprising in view of other Xiaomi subsidiaries such as Dreame or Roborock. In the inconspicuous box of the battery-powered vacuum cleaner are:

Compared to Dyson’s cordless vacuums, the candle-straight shapes and unexciting color scheme are almost restrained. To keep things from getting too boring, Shunzao combines the gray centerpiece with highlights kept in orange. For example, the orange bar provides a nice looking contrast to the rest of the vacuum cleaner. All of this genuinely only looks high-quality, but it also feels that way. This is not least due to the chic aluminum look. Thus, it fits into any conceivable living ambience.

A technical highlight is certainly the display located on the top. Users of the Shunzao Z11 Max can always read the most important information about the device here. Especially the remaining battery life is a very important information. In addition, you can also read the current working status of the battery-powered vacuum cleaner here.

All of the included attachments come with a high build quality. After we’ve worked through the vacuum unit, dust bin and bar, all that’s really left is the floor brush. This is undoubtedly the biggest highlight of the Shunzao Z11 Max. Xiaomi’s subsidiary has equipped its battery-powered vacuum cleaner with an electric anti-wrinkle brush. More about its benefits later. The household appliance also has a lot to offer in terms of accessories. These make a very high-quality impression.

In summary, the Shunzao Z11 Max can’t be faulted for its design and build quality. The battery-powered vacuum cleaner doesn’t make any mistakes here. However, some might have wished for a bit more courage from the manufacturer. After all, you can hardly distinguish it from the Shunzao Z11 Pro in terms of looks. However, it looks different on the inside. And we want to go into this in the following.

The hardware of the Shunzao Z11 Max

The heart of any vacuum cleaner is, of course, its motor. Therefore, in order to raise some expectations in us in advance, we first took a look at the Shunzao Z11 Max’s manual and checked its detailed configuration: The brushless motor of the Shunzao Z11 Max can reach a maximum speed of 125,000 rpm and produces a suction power of 26,000 pascals. In a direct comparison, the Shunzao Z11 Max does really well even when compared to flagships from Dyson.

But Shunzao doesn’t just want to score with decent performance. On top of that, the Z11 Max works according to a revolutionary principle. Namely, with the new vacuum cleaner, the manufacturer also introduces a technology called “cyclone cone”. Most vacuum cleaners on the market rely on a classic filter technology. After a long time, a lot of dust accumulates in the filters and the filtering and suction performance decreases over time. However, when cyclone technology is used, dust and gas are separated before the filter is used. This is to reduce the load on the built-in filter. In this way, the problem of suction attenuation is mitigated in long-term use.

Looking at the hardware of the Shunzao Z11 Max, I am really positively surprised. After all, it is extremely rare to find a vacuum cleaner in this price range that can already keep up with the expensive models of the upper class on paper. However, the cyclone technology is a special highlight. As the owner of a cordless vacuum cleaner from Dyson, I can only confirm that the suction power decreases over time due to an overtaxed filter. I am already curious about the first long-term experiences with Shunzao’s sophisticated filter technology.

In order not to overtax the vacuum right away, I started small in my test. In particular, light dust and a few grains of rice were to serve as the first challenge. Of course, the Z11 Max had no problems with this. It sucked up all the dirt after one suction pass without leaving any noteworthy residue. Anything else would have really surprised me. Now we wanted to raise the level of difficulty a notch. For this, I dumped out the collected dirt from the last week from the dust bin of my Dyson V10 and let the Z11 Max suck it up. As it turned out, this was also no problem for the vacuum from the Far East. It quickly took care of the dirt pile and didn’t swirl anything around in the process.

Lastly, I wanted to confront the Z11 Max with one of the biggest challenges for any vacuum cleaner: Hair. Since I own two longhaired cats, I have the best test conditions for this. So I gathered a few tufts of fur from the cat tree and draped them on the floor. Sucking them up was no problem here either. But with a closer look at the brush of the vacuum cleaner, it became clear that some of the long animal hairs got caught. This often leads to knotted hairs, which can eventually clog the entire suction tube and extremely reduce suction power. Especially for this problem, Shunzao promises a certain protection against hair entanglement.

The protection can be seen once you take a close look at the brush. Here, there is an orange strand that holds small serrated metal blades. Shunzao uses these as a secret weapon against hair that threatens to get tangled. The way it works is as simple as it is ingenious. When Shunzao Z11 Max’s Anti-Tangling Roller Brush is working, the tightly packed blades move back and forth to cut any hair wrapped on the roller brush, and then suck it directly into the dust bin to prevent tangling.

In the field test, the function proved to be extremely practical. To remove the hair that is on the brush, you just have to let the Z11 Max idle for a short while. After just under two minutes, it became apparent that the hairs that were previously hanging on the brush had disappeared, as they were sucked up. In addition to the suction power, the volume also plays a big role for many. On level 1 and 2, the volume was not at all annoying. On the maximum level 3, the vacuum is clearly audible, but it never really bothered me.

Overall, the cleaning performance of the Shunzao Z11 Max is still outstanding and reminiscent of its predecessor the Z11 Pro. Here, the everyday dust and dirt that comes about with a small family poses no problems whatsoever. Particular mention must be made of the ingenious brush roll with its small metal prongs. After all, with this Shunzao has finally found a solution to the widespread problem of tangled hair.

Of course, the actual use of the cordless vacuum cleaner also plays a big role. After all, a high level of user comfort is a basic prerequisite for many to want to use a household appliance at all. Fortunately, the Chinese have not tried to reinvent the wheel here, but have oriented themselves to the common devices on the market. The LCD screen of the Shunzao Z11 Max deserves special mention. Here you always have an overview of what the vacuum is doing. Besides battery level, you can see the working status here. This creates a very good user experience.

In order to change attachments or, if necessary, to remove blockages, the complexity of the assembly and disassembly naturally plays a big role. And here, too, Shunzao does not make any false experiments. To install or uninstall the rod, you simply have to hold down the connection point. This worked very well in practice and is very easy to do. Opening the dust container is also no problem. With the Shunzao Z11 Max, you just have to click on the button at the back. The dust container then opens as if by magic.

The battery of the Shunzao Z11 Max also relies on a detachable design. Here, the Chinese score in terms of sustainability, as this is by no means standard. After prolonged use of a normal vacuum cleaner, the battery shows an increasingly weaker charge. If it cannot be replaced, the entire device has to be replaced. Electric waste is thus pre-programmed. The removable battery of the Shunzao Z11 Max is very interesting. If the battery weakens after a certain period of use, you can simply buy a new one.

Shunzao has launched a really good battery vacuum with its Z11 Max. In doing so, the company by and large sticks to the successful formula of the Z11 Pro and does not have to hide behind the expensive competition. Quite the contrary. Features like the special brush with hair-splitting function could even be groundbreaking for other manufacturers. The replaceable battery also deserves positive mention in this price range. Xiaomi’s subsidiary combines great suction power with very high user comfort here.

Shunzao has launched a really good battery-powered vacuum cleaner with its Z11 Max. The company generally sticks to the successful formula of the Z11 Pro and does not have to hide behind the expensive competition at all. 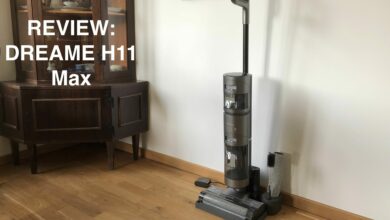