Synology Disk Station DS420j is an entry-level NAS first presented at CES 2020 in Las Vegas. As a NAS (Network Attached Storage) with four hard drive bays, it is also called a 4-bay NAS.

Synology’s DS420j Disk Station is primarily aimed at home users who only need network storage. However, the system offers all the convenience of Synology Diskstation Manager (DSM), and can do much more. Users can install up to four 16TB hard drives, but SSDs can also be used. The system is powered by a four-core processor, which should provide enough power for personal use. With a 1 Gbit/s Ethernet connection and two USB 3.0 ports, the DS420j offers relatively few connections, but the price is also pleasantly low at around 310 euro.

We’ve taken a close look at whether the Synology Diskstation DS420j is worth your while and hope this review will help you make a decision.

The exterior of the NAS case is kept very simple. Synology uses matt plastic for the front, and there are also high-gloss elements on the sides. The back and the lid, which also goes over the sides, are made of painted steel.

On the front, there is a silver button in the middle, which is responsible for switching on and off. An integrated LED indicates operation, and there are also additional LEDs on the left and right that provide information about the status of the LAN connection and drive activity.

On the steel back side you will find all connections of the NAS server. These are reduced to the bare essentials in the DS420j disk station: 1x Gigabit Ethernet, 2x USB 3.0 and a Kenstington lock. Furthermore, a reset button is found here, which has to be pressed in with a pointed object.

The housing can be opened at the rear. There are four thumbscrews. If these are loosened, a flap can be opened easily. There you can find the four hard disk bays and the two fans.

On the bottom side, the DS420j disk station is equipped with four rubber feet, which decouple the case from the ground and ensure a non-slip stand.

As already mentioned, the hard drive bays are accessible after loosening four thumbscrews on the back and opening a flap. To make the hard disk cage even more accessible and to be able to screw the hard disks together later, it is also recommended to remove the cover, which can easily be lifted off if the backside has already been opened.

The four drive brackets are made of ABS plastic and can be easily pulled out. Afterwards the hard disks can be inserted and fastened with four screws each. Then they can simply be pushed back in and automatically slide into the corresponding connectors. Two more screws can now be used to fix the slots to the hard disk cage. Even if the drives are relatively tight, it is recommended that you continue screwing to prevent slipping and losing the connection. Unfortunately this is not possible with every hard disk, because not every hard disk has three holes on each side. In this case, it would have been better if Synology had opted for an independent mounting system.

Unfortunately, tool-free assembly is also not possible. However, this is not a real disadvantage for users, nor is it a disadvantage due to the internal installation of the hard disks. It is also very easy for laymen to install the hard disks and in private use a frequent hard disk change is probably the exception.

Another positive point is that the fans are mounted on the rear flap and can therefore be replaced or cleaned very easily.

Commissioning is very simple. After the hard drives are installed, all cables connected, and the DS420j Disk Station is powered up, access is possible via the web interface. This is where the downloadable Synology Assistant or the domain find.synology.com can help you find the address of the local NAS server. Alternatively, you can simply look into the administration interface of your router, where the NAS server is also displayed with its IP address.

During the initial setup, the hard drives must be reset. If they are already in use in a Synology NAS, this is not the case. So if you need to reset the NAS, there is no need to worry about data loss.

A simple installation wizard will guide you through the setup. The operating system is automatically downloaded and installed, which takes a few minutes. After that, only an administrator account needs to be created. It is also possible to set up Quick Connect directly, which allows access via the Internet. A Synology account is required for this. Alternatively, you can simply use a dynamic DNS service later and set up your own domain.

In our picture gallery, you can follow the setup in single steps:

Afterwards there is also a short introduction to the system:

Functional range of the DSM

Synology Diskstation Manager (DSM) is the operating system of Synology NAS servers, including the DS420j Disk Station, and offers an extremely high level of functionality, allowing for many ways to use the device not only as a network storage device, but also for various other application scenarios. It is a clickable web interface that resembles a desktop. It is based on Linux, which can also be accessed via SSH or other protocols if required to make in-depth settings. For the normal user, however, the web interface is sufficient.

It offers all necessary functions for network access. So you can create different user groups and users and assign them their own access rights. Of course, access to shared folders and files is also possible. The access is not only possible via the web interface, but can also be carried out via the Windows Explorer or the corresponding counterparts under MacOS and Linux after some settings have been made. Especially helpful here is the possibility to assign your own domain including SSL encryption via DDNS and Let’s Encrypt. Access from Smartphone or TV sets is of course also possible.

In addition to file management, the DSM also offers the possibility of image management similar to Google Photos. Synology calls the associated application “Moments”. It automatically categorizes images and also integrates face recognition. An Office package is also available. These and other applications can be easily installed and kept up-to-date via the Package Center.

The full feature set of Synology Diskstation Manager would go beyond the scope of this review, but we will post more tutorials on this topic in the future.

Also extremely important for some of you: the LEDs in the front panel can be turned off to avoid disturbance.

The DS420j disk station is driven by a Realtek RTD1296PB processor that relies on four 1.4 GHz cores. The CPU is particularly energy-saving and is therefore also passively cooled. However, the entire housing is cooled by two 3-pin fans with 80 mm frames. Built in are FD128020HL from YEN SUN Technology (Y.S. Tech), which rotate at up to 2,900 rpm and become 29.1 dB(A) loud. The air throughput is then 52.2 m³/h and the static pressure is 2.8 mm H²O. So it may well be worthwhile to replace them with Noctua fans, for example. But they won’t be particularly noisy either, unless you let them run at full speed. Synology offers four modes: full speed, cooling mode, silent mode and low power status. Low Power Status mode is not available on all Synology NAS systems, and the fans will turn off completely at low temperatures.

The system performs well and the processor manages to utilize the Gigabit LAN port. The data transfer speed is up to 118MB/s, and the system is slightly slower (10%) for encrypted files. Only the transfer of USB devices is comparatively slow, but you have to keep in mind that this is an entry-level NAS.

The power consumption is pleasantly low. In idle mode it consumes about 2 watts, and about 25 watts when operating with four hard drives. The exact consumption also depends on the hard drives used.

Unfortunately, the system is not really quiet, as there is no case insulation and even the small fans have to be turned up sometimes. Here we would have wished for something better.

We also have to note that the DS420j only supports ext4 formatting. An error detecting format like btrfs or zfs is unfortunately not usable.

All in all, Synology delivers a viable entry-level NAS system at an attractive price with the DS420j Disk Station. The assembly is easy, the performance is good, and Synology Diskstation Manager is a near-perfect operating system. Even though not everything can be clicked together easily, most of it can. We just would have liked better insulation so that the system can disappear inconspicuously in the background. We will publish some more tutorials with the device, but in the future, we will certainly show the possibilities for a homemade NAS that is better insulated. 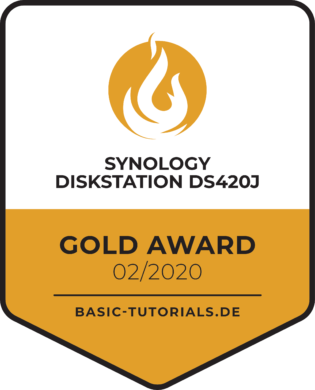 Synology Disk Station DS420j is ideal for beginners and home users who need four hard drive bays in their NAS.