We were given the opportunity to test the VIMGO Smart Mini Projector P10 and put it through its paces. An LED projector that can be purchased for 299 Euros via Buybestgear.

The projector promises a native 1080p full HD image at a brightness of 10000 LUX and a high contrast ratio according to the manufacturer.

Whether the VIMGO P10 could keep these promises in the test, we have put under the microscope for you.

Included with the LED projector is a remote control, instruction manual, and a 19VDC adapter.

Not included are 2 AAA batteries for the remote control and an HDMI cable. Whereby it is not a must at this price.

The user manual is written in various languages (ENG, DE, FR, JP, ES, IT). However, a translation program was used here, which doesn’t exactly make it easy to understand some points.

Accordingly, the English version had to be used to solve emerging ambiguities.

The VIMGO P10 is delivered in a plain white cardboard box. On the box, some information about the product can already be seen. The LED projector is held by a plastic carrier in the box and is thus protected against external shocks and slight damage to the box.

Furthermore, the projector as well as the remote control are wrapped in a protective foil. The lens of the projector is also covered with a glass protector (foil). The connection cable lies in a separate chamber of the plastic carrier and is thus spatially separated from the projector.

Unnecessary packaging material is dispensed with.

The VIMGO P10 comes in a pleasantly unobtrusive rectangular design, rounded at the edges. The white plastic elements are matte, and even the side elements are not as blue as they appear in the product images at Amazon.ca. I would rather describe it as light gray with a slight blue tint.

If the VIMGO P10 didn’t have a lens on the front and also no ports on the back, it could pass for an elegant smart speaker in terms of design.

The power button is located on the upper side. There are no other controls on the projector. Consequently, all other inputs are made via the included remote control.

Thus, the remote control is an elementary part of the scope of delivery and shouldn’t be misplaced in any case.

The IR sensor and the lens of the projector are located on the front. There are holes underneath the lens frame to transport warm air out of the case. The lens frame is anthracite and the plastic has been given a high-gloss finish.

Here, I would have found it better if this component had been manufactured with a matte surface, just like all the others.

The gray-blue covers are found on the sides. Even though you might assume the speakers are here, I think they are located at the back. Each side cover has the company logo on it.

On the back are the ports of the VIMGO P10. Behind the two upper honeycomb-shaped hole elements hide the speakers and the lower hole segment supplies the inside of the projector with fresh air.

On the bottom there are 4 rubber feet and a threaded hole for a stand.

All in all, the design of the projector is simple, functional and successful in my opinion.

The remote control has all the necessary buttons to operate the projector. It fits well in the hand and all buttons can be reached with the thumb. A haptic resistance can be felt with every click. In addition to the haptic feedback, a rather loud clicking noise is audible. I don’t know if it is desired by the manufacturer, each key has a slightly different sound.

Concessions have to be made here in terms of the materials used. The plastic of the remote control and also the buttons looks cheap and the soft plastic magically attracts dust. The battery compartment rattles.

The VIMGO P10 can be set up in a few steps and is ready to use after a few minutes of setup. After power is supplied, the language is selected and you are in the main menu.

The main menu is tidy and clearly structured. The background of the main menu can also be customized and it is possible to install Netflix and co. via an integrated app store.

The operating system runs smoothly and the apps, such as YouTube, Netflix and Spotify, respond promptly to remote control inputs. However, I would like to point out at this point that the operation via several levels of the remote controls (mouse function) takes some getting used to.

Initially, the navigation in Netflix caused an increased pulse. However, after a short period of getting used to it, that also worked.

Since the VIMGO P10 projects forward and not upward, I recommend using a tripod. Alternatively, the projector can be positioned on the edge of a shelf/table to get the entire screen projected onto the wall. While there are ways to adjust the image via the settings, it is still imperative that the projector be positioned at eye level or higher.

Now I have arrived at the main tasks of a beamer. First, the image and secondly, the sound. Where for me personally the image has the higher weighting, since I can switch to other boxes via Bluetooth.

Surprisingly, the picture of the VIMGO P10 LED projector is by far not as bad as one would expect for a projector at a price of 190 Euros. Especially in dark rooms, the image is very recognizable. The sharpness of the image is good and can be adjusted continuously via remote control (if the projector is not to remain permanently in one place).

The Full HD image is quite decent when scaling 4k footage to Full HD, and also with Full HD-only video footage.

Unfortunately, a rather sharp drop in the luminosity or illumination of the image is noticeable when the light falls on it.  Furthermore, it is noticeable that the sharpness and also the illumination drop at the edges. In short, one could think that someone has put a vignette on the video footage.

The same applies to colors. These are not as crisp compared to other monitors/TV and look pale.

The sound is surprisingly very decent. Although the mode that simulates surround sound is not recommended. This mode puts the case into very strong vibrations on my specimen.

I was surprised by the VIMGO P10 projector’s options for pairing my end devices. The possibility of mirroring an Android end device as well as the software AirPIN(Pro) are an asset.

For 299 euros, you get a solid, smart LED projector that can be used for the barbecue, for public viewing with friends and neighbors, in the garden or even on the balcony and terrace. However, the projector is not a replacement for a TV.

Clear compromises have to be made with the missing battery in the projector, the light intensity as well as the sharpness of the picture. If you need more than 1080p resolution, the VIMGO P10 is the wrong product. Furthermore, the location and possible darkening options should be considered before purchasing.

The quite short power cord is, on balance, acceptable. However, in order to enjoy the projector for a long time, the remote control should never be misplaced.

On the other hand, the very good price, the really successful design, the amazing functionalities. Here the VIMGO P10 can convince in the test.

Solid projector at a good value for money, diverse connection and setting options, weaknesses in the picture in bright rooms, the usability and the workmanship of the remote control. 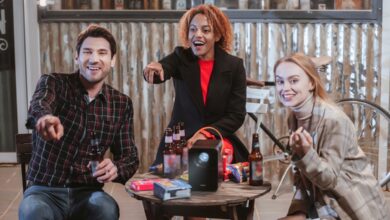 Yaber Pico T1 review: How good is the tiny projector for the pocket?

We were given the opportunity to test the VIMGO Smart Mini Projector P10 and put it through its paces. An LED projector that can be purchased for 299 Euros via Buybestgear. The projector promises a native 1080p full HD image at a brightness of 10000 LUX and a high contrast ratio according to the manufacturer. … (Weiterlesen...)