The manufacturer Artic has long been a very well-known manufacturer of CPU coolers, GPU coolers and case fans. Especially the CPU coolers of the Freezer series and GPU coolers of the Accelero series have made this brand famous worldwide. The Arctic Freezer 33, introduced three years ago, was a popular tower cooler in the price range below 30 Euro. A year ago, Arctic updated this series in the form of the Arctic Freezer 34. This series is available in four versions (Freezer 34, Freezer 34 CO, Freezer 34 eSports, Freezer 34 eSports DUO). The eSports variants are also available in grey, red, yellow, green and white.

In this review you can see how the € 40.99 expensive Arctic Freezer 34 eSports DUO performed in our test parkour.

The Freezer 34 eSports DUO comes in a compact and colorful printed cardboard box. The box contains all technical specifications and product pictures of the CPU cooler. The product description is printed in seven different languages.

If you open the upper flap of the packaging, a warranty brochure and a card with a QR code will appear. This QR code leads directly to the installation instructions on the Arctic homepage. There is no printed manual. The CPU cooler comes pre-assembled with both fans and fits perfectly into the box. Apart from the outer packaging, there is no further protection for the heatsink and the fans inside the box. Finally, there is a narrow box with all mounting accessories for all common sockets.

The Arctic Freezer 34 eSports DUO is a normal sized CPU cooler in terms of dimensions. It is 157 millimeters high and 103 millimeters deep with the two fans. Like many heatsinks in this price class, the Arctic Freezer 34 has four 6-millimeter heat pipes with Heat-Pipe-Direct-Touch technology. The heatpipes are thus located directly on the CPU’s heatspreader. The heat sink weighs 494 grams without fan and is black anodized including the sockets and the heat pipes. The anodization looks very good and has no flaws. To round off the overall look, Arctic has also colored the fan clips black.

The two BioniX P120 PWM fans supplied are predominantly black. However, in order to bring some colour into play, Arctic has coloured the ring around the fan and the integrated rubber buffers. Both fans have a 4-pin PWM connector with Y-crossover and rotate at a maximum of 2100 rpm. How this high number of revolutions per minute affects volume and cooling performance is shown on page 3 of this review.

The manufacturer follows the uniform design for mounting accessories. Backplate, screws and retaining brackets are also black. Overall the workmanship is good. Merely the plastic backplate for mounting on Intel mainboards looks a bit cheap and not really durable.

For the review, a test system on a benchtable is used. This allows us to exclude disturbing factors such as heat accumulation in the housing. The test system consists of the following components.

As already mentioned, there are no installation instructions in the scope of delivery. It can only be opened by calling up a QR code. This code links directly to the manufacturer’s homepage and is available in a total of eight languages. In addition to a clear arrangement of the assembly steps, a complete assembly video is always included.

In our test system with AM4 socket, the assembly of the cooler requires only a few parts and starts with the preparation of the heat sink. This is because the heatsink still has to be equipped with two retaining brackets, which is done with the help of a screwdriver and one screw per retaining bracket. The upper plastic brackets of the AMD retention module must then be removed. The backplate of the retention module remains behind the mainboard and is now equipped with four metal bolts at the front.

The assembly of the cooler was quickly completed and the animated instructions on the homepage were clear and unambiguous. Although the assembly system is simple in design, it looks solid and serves its purpose. In spite of the two fans, there should be no problems with high RAM coolers or overhanging VRM coolers.

To heat up the processor, the processor was loaded with Prime95 for 15 minutes. The temperature of the CPU was then read out with the CPUID Hardware Monitor. This test was performed in two different scenarios and then compared to the values of the AMD Boxed Cooler (Wraith Prism RGB). During the temperature measurements, the room had a temperature of 18°C.

The Arctic Freezer 34 eSports DUO does well in the endurance test. Especially at a lower engine speed, the temperature difference to the boxed cooler is a delta of 23 °C. A further advantage of the Freezer 34 is also the volume. At full revs the cooler isn’t among the quietest, but the fans don’t produce any noise and are significantly quieter than the AMD boxed cooler at reduced speed. The Freezer 34 eSports DUO isn’t one of the quietest or best performing coolers, but you can’t expect that with a price of € 40.99 *.

Let us now come to the final conclusion of the review of the Arctic Freezer 34 eSports DUO. Arctic is known for products with a good price-performance ratio. The manufacturer continues this tradition with the Freezer 34 eSports DUO. The cooler offers enough power to cool mainstream CPUs such as the Ryzen 7 3700X or an i7-9700K. The Freezer 34 eSports DUO is also suitable for a bit of overclocking. To be interesting for many potential buyers, this CPU cooler is available in five different colors and the heat sink and mounting accessories are completely black anodized. Also the animated assembly instructions, which can be called up via a QR code, is a good idea. The complete package is rounded off by a 10-year manufacturer’s warranty.

What did we not like so much about this cooler? Although the assembly system is practical, it dispenses with a controlled adjustment of the contact pressure via springs. Moreover, the Intel backplate is only made of plastic and not metal. There aren’t any other negative points in the freezer, though. Overall, the Freezer 34 eSports DUO thus represents a good CPU cooler for the price-conscious buyer. The cooling capacity is sufficient for all current mainstream processors, but you should be somewhat cautious when overclocking. 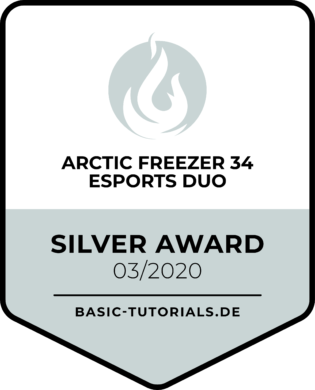