With the Force Series MP600 GS, Corsair adds a mid-range SSD to its current lineup, which mainly consists of high-end SSDs, such as the MP600 Pro, the Pro XT and the Pro LPX we already tested. The MP600 GS also relies on 3D NAND TLC, but does without a dedicated DRAM cache, and achieves speeds of up to 4,800 MB/s sequential read and 4,500 MB/s sequential write. Thanks to lower power consumption and less waste heat, a heat sink is also not required. The SSD is available in 500 GB, 1 TB and 2 TB capacities, for our test we have the 2 TB model of the MP600 GS.

The Corsair Force Series MP600 GS is a mid-range SSD in M.2-2280 format, which offers sequential transfer rates of up to 4,800 MB/s read and 4,500 MB/s write, respectively, at a capacity of 2 TB. The read speed is identical for the other capacities, but the write speed increases with the capacity. This is well below the PCIe Gen4 high-end SSDs, which usually reach 7,000 MB/s read and 6,000 MB/s write or more.

Corsair relies on a fast 176-layer TLC NAND from Micron (B47R) for the MP600 GS as well as the Pro models. Phison’s PS5021-E21T, without a DRAM cache, is used as the controller instead of the PS5018-E18. The MP600 GS also requires less power than the Pro models. Thus, compared to the Pro LPX, the consumption drops from up to 8.6 W to up to 5.3 W during reading and from up to 8.5 W to up to 4.9 W during writing. Due to the lower power consumption, there is also less waste heat, which means that a heat sink can be dispensed with. This enables the use in notebooks, for example. The warranty period of the SSD is 5 years or applies up to a write performance of 1,200 TB.

The Corsair Force Series MP600 GS is shipped in a bright yellow cardboard box with a clearly visible picture of the SSD on the front. One also refers to the PCIe generation, read and write speed (sequential and IOPS) as well as the capacity.

The PCB of the SSD is black and populated on one side. Most of the components are covered by a sticker that is also black, and there is information such as the exact product name on the back.

For the performance test of the Corsair Force Series MP600 GS we use, as usual, the programs AS SSD, CrystalDiskMark, ATTO Disk as well as HD Tune Pro.

Results of the performance test

The Corsair Force Series MP600 GS achieves a mostly good result in the AS SSD benchmark. This also applies to the copy benchmark and the benchmark score. In the important 4K tests, it even achieves a very good result and competes with the already tested high-end SSDs. However, it falls a bit short of our expectations in the 4K-64-THRD write test.

With 4,970 MB/s in sequential read and 4,749 MB/s in sequential write, we exceed the manufacturer’s specifications of up to 4,800 MB/s and 4,500 MB/s in CrystalDiskMark by almost 4 and 6%, respectively. Overall, the good impression gained in the AS SSD benchmark continues here as well. The SSD mostly lands in the upper midfield, although the gap to the high-end SSDs, such as the MP600 Pro LPX, is quite clear. This also applies to the 4K tests, where the MP600 GS can again convince. Only in the 4KQ32T1 tests does it fall further behind.

Corsair’s new mid-range also does well in the other benchmarks. It achieves up to 2.6 million read and 4.5 million write IOPS in the ATTO benchmark. For comparison, the MP600 Pro LPX achieves 3.3 million and 5.2 million IOPS, respectively. Other high-end SSDs with Phison PS5018-E18 controller offer a very similar performance. In HD Tune Pro, the MP600 GS lands just behind the top with a very good 2,588 MB/s and the access times are also very low throughout.

Overall, the Corsair Force Series MP600 GS offers a good performance and usually places itself in the upper midfield of the SSDs we have tested so far. Besides a few small outliers upwards, there are also a few downwards. The gap to the high-end SSDs is usually clear, but it lives up to its intended role as a mid-range SSD. The Adata Legend 840, which we recently tested, offers a similar, often slightly higher performance, but it is only available with a maximum capacity of 1 TB.

In testing the Corsair Force Series MP600 GS, we briefly reached maximum temperatures of 70°C at a room temperature of ~21°C. This also represents Corsair’s stated operating temperature limit. With the M.2 heatsink of our ASUS mainboard, the temperature dropped significantly to only 51°C. However, there were no performance drops even without the heatsink.

Overall, the Corsair Force Series MP600 GS can convince in the test, considering that it is a mid-range SSD. The SSD offers high sequential read and write rates, which are also achieved or surpassed in the performance test, and it also mostly achieves good results in the other tests. In a few cases, it offers a similar performance as the high-end models, but the gap is usually significant. Apart from enthusiasts, it should still be sufficient for most applications, e.g. in a notebook, as a storage device for games and data, or for price-conscious users. Demanding users who want maximum performance or want to load the SSD with their applications permanently are better served with Corsair’s Pro models, for example.

The power consumption and thus the heat development of the MP600 GS are lower than other Corsair SSDs, but we still reached very high temperatures of 70°C in the performance test. These are not a cause for concern and do not lead to a drop in performance, but a passive heat sink or at least a draft of air would be good for the MP600 GS.

Even though the price of the MP600 GS has already dropped from ~200€ to ~174€ (as of 18.12.2022), this is currently still the SSD’s biggest point of criticism. Although it is one of the cheapest models, if we restrict ourselves to a similar performance, the Mushkin Vortex with DRAM cache, which is significantly faster according to specifications, is currently still available for less. Also Kingston’s KC3000, which we already tested, offers a significantly higher performance for a small surcharge. A buy recommendation therefore depends heavily on the price of the MP600 GS as well as that of the faster competition, mostly with Phison PS5018-E18 controllers.

Mid-range SSD with good performance and low power consumption, but currently still too close to the high-end SSDs in terms of price. 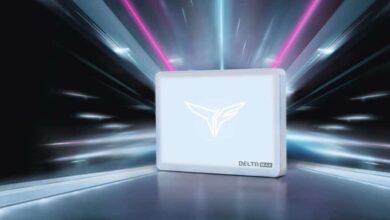 With the Force Series MP600 GS, Corsair adds a mid-range SSD to its current lineup, which mainly consists of high-end SSDs, such as the MP600 Pro, the Pro XT and the Pro LPX we already tested. The MP600 GS also relies on 3D NAND TLC, but does without a dedicated DRAM cache, and achieves speeds … (Weiterlesen...)