Originally focused on cases and power supplies, but now has a wide range of different products. For example, the German manufacturer released several cases in addition to a new mouse in December. One of them is the IT-3306 Cavy, a midi tower for 35.99 Euros. RGB lighting, acrylic side panels, magnetic dust filters and a generous interior are among the features. Especially the low-budget area is much contested, so everything has to be right for a good rating of the case, and that’s what we test for you.

You notice the low price right from the box. Plain with printed image of the case including a small diagram of the interior and on one side are the technical details. Inside the box, the IT-3306 Cavy is protected in styrofoam. To protect the case from scratches, it is in a plastic film.

The package includes the typical mounting hardware as well as a motherboard speaker. Everything is in a bag, which is fastened with a cable tie inside. However, a short installation guide or cable ties for better cable management are not included. Further, a magnetic dust filter and a 120mm RGB fan are still included, both of which are pre-assembled.

If you want a new case with an eye-catching look, the Inter-Tech IT-3306 Cavy is a good choice. Although the front panel is almost entirely made of thin plastic, it does have a striking design. An LED strip runs from the top to the bottom in the center of the panel. In the center of the strip, there are mesh grilles on both sides, behind which the pre-installed RGB fan is installed. Behind the panel, disassembled with a short jerk, are the easily accessible mounting frames for the fans (two 140 mm or three 120 mm fans).

On the top of the case there is a generous air intake to provide your installed components with enough air for cooling. The magnetic dust filter is also located here. The I/O panel is also located on the upper side. If the case is placed under the table, you have good access to the available USB slots (1x USB 3.0, 2x USB 2.0), as well as the microphone and headphone ports. Although the lighting can be controlled by many motherboards (ASUS Aura Sync, MSI Mystic Light Sync, etc.), we still find a button to control the lighting next to the start button.

Meanwhile, the so-called tempered glass is becoming more and more popular in the field of inexpensive cases. With the IT-3306 Cavy, however, Inter-Tech does without glass completely and relies on a transparent acrylic side panel. It serves its purpose and is visually really hard to distinguish from glass. However, acrylic is much more susceptible to scratches. The acrylic side panel is attached with thumbscrews, just like the steel side panel on the right.

The rear continues unspectacularly. Seven expansion slots, where the bezel has to be broken out. We also find an empty space for another 120 mm fan here. The underside is just as inconspicuous. The IT-3306 Cavy stands on four feet including rubber to protect the bottom and minimize vibrations. There is also a mesh dust filter in front of the PSU vent, which is easy to remove, but reinserting it is a bit fiddly.

It should really be clear to everyone that we cannot expect a high-end case with a huge interior with outstanding cable management options at this price. The interior offers space for ATX mainboards and is divided into main chamber in the upper area and the PSU chamber in the lower one. Since the Inter-Tech IT-3306 Cavy is quite compact, the mainboard tray takes up almost the entire interior. In the right area, however, there are still openings for cable routing as well as two mounting places for 2.5″ data carriers.

The main and power supply chambers are separated by a large perforated cover. The perforation ensures air circulation and the cover itself ensures that the cables and hard drive cage are well hidden. Two 120 mm fans can also be mounted on the cover.

The back offers us about 20 millimeters of space for our cable management. Matching to that, we find small tabs where the cables can be fixed with cable ties. Two 3.5″ hard drives can be mounted in the mentioned hard drive cage. Inter-Tech advertises decoupled hard drives to avoid vibrations, but only one of the two sides can be equipped with rubber studs.

System construction in the Inter-Tech IT-3306 Cavy

Due to the generous main chamber, a tall CPU cooler could also be installed, but in our case it has become the AMD stock fan, which is also more than sufficient for this CPU. Otherwise, the ASRock B450M-HDV* fits completely into the case without covering the cable openings. Once everything is tied down with cable ties, the interior looks really tidy. The back is not perfect due to the limited space, but the airflow should be minimally affected. For graphics accelerator, we use an AMD Radeon RX 580 from Sapphire*, which fits well in the case. You can see that even longer high-end graphics cards would find their place.

Overall, the Inter-Tech IT-3306 Cavy offers 160 millimeters of clearance for the CPU cooler and 300 millimeters for graphics cards, plenty of room for potent hardware and most cooling solutions. High-end hardware will probably be installed in a different case anyway. However, you should definitely be careful with power supplies. Inter-Tech doesn’t specify a maximum length, but with 160 millimeters the installed one is already at the limit of what is possible. Modular power supplies certainly have an advantage here.

The pre-installed fan with 120 millimeters and RGB lighting is located in the front. The fan is connected via a 3-pin cable, the RGB lighting is controlled via a 5V 3-pin RGB header. To hear the fan at full speed (1200 rpm) is only very quiet when it is really quiet in the room.

Lighting options in the Inter-Tech IT-3306 Cavy

We find the lighting of the IT-3306 in a strip in the center as well as the fan installed behind it. Even through the mesh grille, the fan’s illumination is still very visible. By default, it’s possible to control the illumination via the I/O panel. Three effects can be selected at the push of a button – two rainbow color gradients or a constant color. You get more possibilities via the mentioned header. This is connected directly to a compatible mainboard and can be controlled via it.

Conclusion on the Inter-Tech IT-3306 Cavy

The Inter-Tech IT-3306 is not aimed at gamers who want to install high-end hardware, and it shows. For about 40 euros you get a good workmanship and great features. Again, it must also be mentioned that while the IT-3306 Cavy does offer a pre-installed RGB fan, LED lighting in the front, and a magnetic dust filter, other cases in this price range offer the same features and also have better workmanship, or a real glass side panel, for example.

The IT-3306 Cavy cannot completely convince, but it offers great features.

InWin BR36 in test – water cooling and fan in one? 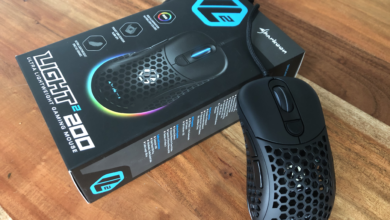