It is now more than a year ago that the manufacturer Lian Li has revived the brand LANCOOL in the form of the LANCOOL ONE. The LANCOOL One had already done well in our test but had a few points that we didn’t like so much. At the end of November 2019 the manufacturer has now presented the second generation of the LANCOOL branded case. The second version is called Lian Li LANCOOL II and in comparison to its predecessor it does completely without aluminum elements. Thus there is more room for other features such as double-sided glass elements, special cable management devices or three pre-installed case fans.

The Lian Li LANCOOL II tested here is painted black and comes with € 99.90 * (RRP: 90 €). Beside the black version Lian Li also has a 10 € more expensive white version * in its product portfolio. If a purchase of the LANCOOL II is worthwhile and how it performs in general, we will find out for you in the following test.

The Lian Li LANCOOL II comes well and safely packed in a brown box with black writing and is wrapped in normal styrofoam blocks. Furthermore, the manufacturer has covered both side windows with additional protective film to prevent scratches. The included accessories were stowed in a white cardboard box inside the hard disk cage. This carton contains all important screws, a user manual, various black cable ties and two reusable Velcro strips. Also included are three pre-installed 120 mm fans, pre-installed spacers, dust filters for front, lid and power supply, and two pre-installed RGB strips including control board.

The front part of the LANCOOL II differs in comparison by the almost complete renouncement of aluminium. With the exception of the manufacturer’s logo the complete front panel is made of steel or plastic and has large openings on both sides for better ventilation of the interior. When the front panel is pulled off with a strong jerk, a variable fan frame for up to three 120 mm fans and two magnetically attached dust filters are revealed behind it. Two digitally addressable RGB strips are hidden behind the two dust filters. In order to avoid the risk of torn cables during dismantling, the front panel has a Quick-Connect connection for the lighting.

The lid section of the LANCOOL II is similar to the design of many current midi towers. A large part of the lid area is dominated by a large fan opening and is protected from dust or visually enhanced by a magnetic dust filter. In front of it is the I/O panel. It features two USB 3.0 ports, a microphone and headphone combo jack and a total of four switches. The four switches are used for power, reset and to control the RGB strip. Last but not least, the I/O panel has been prepared for a USB 3.1 type C port. However, the corresponding cable must be purchased separately and is not included in the scope of delivery.

The left and right side parts of the LANCOOL II consist of hardened glass and are attached to the body with magnets or hinges. The omission of knurled screws improves the visual appearance and also makes it easier to remove the side parts. On the pictures you can clearly see that the side parts only cover the upper area. Lian Li has thought of another nice feature for the area underneath the power supply cover. The Midi Tower has two magnetic steel flaps on both sides. When these are open, you have access to the hard disk cage and can mount the power supply without having to remove the complete side parts.

The underside and back, on the other hand, have a classic design. The Midi Tower stands on four solid plastic feet with rubber strips. The power supply unit sits at the bottom and is protected from dirt by a large, fine-mesh dust filter. There is also a kind of rail system to be able to move the hard disk cage if necessary. At the rear there are seven reusable PCI slot covers, ventilation holes and a mounting space for a fan with a frame width of 120 millimetres.

The design of the interior of the LANCOOL II was also considered. It follows the current trend and is very open or divided into two chambers. However, the rubberized cable management openings had to make way for a protruding screen. The mainboard, expansion cards and possible radiators are thus accommodated in the upper chamber as usual. Besides the screen on the right side of the mainboard, there are more cable management openings in the power supply cover and above the mainboard tray. Due to the omission of HDD cages in the upper chamber, the pre-installed fan can transport cold air into the interior unhindered. Due to the variable fan frame it is also possible to install the front fans/front radiators in four different positions.

The power supply cover, which is attached in the lower area, not only improves the appearance by concealing the power supply, cables and hard drive cage, but also provides ventilation slots and holes for two fans with a frame width of 120 millimeters. In addition, the cover has a modular design. If you want to install a thick water-cooling radiator in the front, you can remove a corresponding cover with a single screw.

Now let’s take a look at the back. A special feature should be immediately noticeable here. In order to make the right side look neat despite the wiring, Lian Li has equipped the back with two cable covers. What isn’t covered are merely the two mounting locations for 2.5″ SSDs. If you open the power supply tunnel’s flap on the right side, two more mounting locations for 2.5″ SSDs appear. 3.5″ hard disks can also be accommodated in the LANCOOL II. For this purpose one only has to open the lower flap on the left side and has direct access to three HDD frames made of plastic. The HDD cage is mounted on a rail system and can be moved or completely removed in favour of a longer power supply.

Now we come to the system installation. As hardware we use a AMD Ryzen 5 1400 on a MSI B350 PC Mate with 16GB Crucial Ballistix Sport LT grey DDR4-2666. The Ryzen is cooled by an EKL Alpenföhn Matterhorn Pure. For the image output is a GTX 1060 6GB from Gigabte AORUS responsible. The power supply does the non-modular Berlin Pro RGB 650W with RGB fan. In order to improve the cabling optically a little bit, single sleeved cable extensions of Phanteks were used.

As expected the installation of all components in the LANCOOL II was very easy and fast. Due to the well positioned or dimensioned cable management openings and the 24 millimeters behind the mainboard tray all cables could be laid neatly. The cable covers on the back let the cabling on the back disappear without any problems and thus provide a tidy appearance. In general, the space conditions in the Lian Li LANCOOL II are quite ample anyway. A maximum of 176 millimetres of space is available for CPU coolers. This is sufficient for all powerful coolers. Even with a maximum possible length of 384 millimeters for graphics cards or 210 millimeters for the power supply, the buyer hardly needs to worry.

The mounting of the data carriers requires the use of a screwdriver in all cases. Large 3.5″ hard disks are housed in the HDD cage in the front area of the housing. For mounting, the HDDs are screwed to the plastic frame and then pushed into the bay. Unfortunately there is no proper decoupling. Two SSDs can be mounted behind the mainboard tray with four normal screws each on a steel plate. Two further SSDs or small hard disks can also be mounted on the back of the flap of the power supply cover.

The three pre-installed case fans have a frame width of 120 millimetres and rotate at a maximum of 1400 revolutions per minute. The connection is made directly with the mainboard via black 3-pin connectors. At full speed the fans are unfortunately well audible. Reduced to 800 revolutions per minute, the background noise is much more pleasant, but the flow rate is noticeably lower.

Finally we come to the temperatures that were reached in the LANCOOL II. During the load test Prime95 and FurMark were executed for 15 minutes at a room temperature of 17 °C. Additionally, this test was carried out in two different variants (case fan to 100%, case fan to 50%).

There is basically nothing to complain about in terms of temperatures. The CPU has indeed become a bit warmer with a maximum of 74°C, but the values are still absolutely within the green range. The graphic card stays surprisingly cool with a maximum of 59°C. This strongly suggests that the large fan openings in the front panel are effective and that the single front fan can transport enough cold air into the interior.

In comparison to many competitors, Lian Li does completely without RGB fans in LANCOOL II and uses two hidden RGB strips in the front. The strip is controlled either digitally via the mainboard using a 3pin 5V RGB connector or via the integrated control board in the I/O panel. To enable the latter, the RGB connection cable only needs to be connected to the contact board on the front. Unfortunately this optional step is not explained in detail in the manual. The indirect illumination of the fan grilles has a harmonious effect and reminds a bit of the face of a transformer. Finally, a few impressions of the lighting.

Lian Li has already caused a sensation with the LANCOOL One and has done many things right. Nevertheless, there were still isolated points in the first version which needed improvement. With the second version the manufacturer has now put a shovel on it. By renouncing aluminium accents, more money could be invested in other areas. The LANCOOL II is high-quality processed and offers a lot of features. It not only has an attractive front panel with RGB lighting and glass side panels on both sides, this midi tower also offers a lot of space, a modular fan frame, practical flaps for the power supply tunnel, cable covers on the back and three pre-installed case fans.

Only the volume of the unregulated fans and a non-existent decoupling for 3.5″ hard disks are to be criticized. Moreover, the empty opening for the optional USB 3.1 type C port in the I/O panel disturbs the visual appearance a bit. However, since Lian Li most likely didn’t want to exceed the magic 100 euro limit, a standard USB type-C port was no longer feasible in terms of price. If we finally consider the advantages and disadvantages and include the purchase price of 89.90 €, the Lian Li LANCOOL II can definitely convince us and gets a clear recommendation to buy. 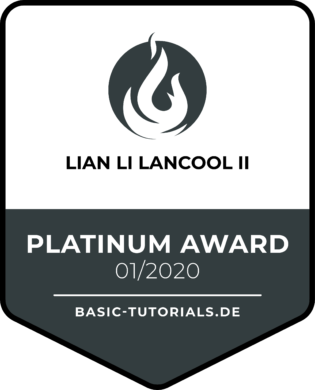 Spacious and high quality manufactured Midi-Tower with many features and a competitive price.

Speedlink Lunera in review – An affordable gaming kit for beginners