Lian Li has also introduced the O11 Air Mini along with several other products at its DIGITAL EXPO 2.0. Thus, the popular O11 family gets a new offshoot, which advertises with extra airflow. Whether the attempt to build a case that advertises with “mini” and an airy design, but not lose the high demands on the modularity of the O11 series, we have found out for you in the following test.

Although “mini” is in the name, the hardware does not have to be exclusively mini. However, we already notice that when unpacking the Lian Li O11 Air Mini for the first time. The case is not big, but small is also something else. It almost resembles a cube. Thus, the case also offers an amazing amount of space.  Thus, there is enough space to install an ATX power supply on the back and still a large tower cooler on the front in the typical two-chamber system of the O11 series. Only those who want to cool their processor with an AiO have to pay attention to which radiators can be installed. This is where the space miracle reaches its limits.

Now, before we go into more detail about the system and check the exact pros and cons, we would like to take a look at the key data first.

The Lian Li O11 Air Mini comes in two color options. We had the white version available for the test. Furthermore, the case is available in black. The basic material from which the case is made is aluminum. Large parts of the aluminum are made of mesh panels and thus offer good ventilation all around. One side panel is also made of glass and thus provides a view into the large main chamber and the components installed inside. The “window” is surrounded by a white frame, behind which the suspension and base frame are hidden.

Unlike the case, Lian Li does not rely on aluminum for the frame. Instead, the manufacturer uses steel here. This benefits the stability of the case. All in all, the case makes a very good impression. Especially the workmanship leaves nothing to be desired.

On the back, besides the usual openings for the mainboard, power supply and the slots for additional cards, we find another special feature of the case. Behind a flap, two 2.5- or 3.5-inch data carriers can be exchanged in direct access.
Furthermore, the Lian Li O11 Air Mini rear panel is modular. It is possible to reduce the 7-slot rear to 5 slots and to move the mainboard opening downwards. A matching bezel is included in the scope of delivery. Thus, the possibility for a radiator in the lid can be created. It should be noted, however, that this does not work with an ATX mainboard, as this requires the full height. However, if you have a Micro-ATX mainboard, you have all options open here.
You can also see the possibility to install the graphics card vertically. For this, the “VGA Vertical Kit” of the case is required and must be purchased separately.

The second side panel is closed with an aluminum mesh panel. The two mesh strips sit directly above the PSU and HDD slots, as well as directly above the fan mount on the partition between the two chambers. In the event that fans are installed there, they will get enough air.

The I/O panel is located on the upper side. This has 2x USB 3.0 and once USB 3.1 Type-C ports as well as the power button and a 3.5 mm jack. We find it very practical to install a USB Type-C port here.

All sides are easy to remove. Once the top panel is removed, the front and side panels can be taken out without any additional screws. A small but very practical detail, which makes the work easier when assembling the PC. The back plate is then attached again with two screws for this purpose.

Inside, as already mentioned, the well-known and proven two-chamber system is used. Here, the two chambers are separated by a wall that forms a “step”. In this step you can install a 240 mm radiator. In the bend of the partition are two openings, which are provided with gray rubber lips. Cables can be cleverly passed through here without opening the view into the second rear chamber. If time is saved on perfect cable management, this still keeps things looking tidy in the visible main chamber.

Included with the O11 Air Mini are three fans. 2x 140 mm in the front and 1x 120 mm opposite next to the motherboard opening. The remaining space and how to use it, Lian Li states as follows:

In addition to the PSU, the second chamber can also accommodate up to six 2.5-inch SSDs. Or up to four HDD + two additional SSDs. The scope of delivery includes screws and rubber washers to decouple all storage media. This prevents annoying vibrations. However, the central bar, where two of the SSD slots are, can be removed without further ado and reveals the back of the gray rubber lips, through which the cables can be fed. There is enough room here to stow all the cables in this area and also fix them with the Velcro strips that have been brought forward. Again, if you want to save the time of wiring everything super neatly, you can just hide it behind this bar afterwards.

The power supply is mounted in the Lian Li O11 Air Mini as usual with four screws. Well thought-out by Lian Li: The power supply is slightly elevated and does not rest on the floor. This gives you the opportunity to neatly run cables underneath and thus reach the lower slots on the motherboard. Similar openings are also found on the upper edge. In the HDD/SSD case, the disks can be stored in two holders with the included screws. Once screwed tight, they can be put into the case.

To test the functionality of the case, we installed some hardware components. We used the following components for this purpose:

With this system, we tested how well the case helped keep the components cool. For this purpose, we put the processor under full load with Prime95 for 20 minutes at a time. We tested at a room temperature of 20 °C. With the installed Be quit! DARK ROCK 4, a CPU temperature of 65 °C was achieved. The same test only with the Enermax LIQMAX III 240 ARGB White we reached a temperature of 55 °C after 20 minutes.  Both values confirm that there is a very good airflow in the case and that the system is sufficiently supplied with air at all times.

Undeniably, the Lian Li O11 Air MINI has become an airy case. It accommodates a lot of fans and absolutely does not get in the way of airflow. The mesh structure allows the air to flow well and looks really good to boot in our eyes. It gives the case an absolutely clean look. This is also rounded off by the glass panel on the side, which provides a view into the interior.

The workmanship is, as usual from Lian Li, outstandingly good. We did not notice any flaws in the material during our test. This was partly due to the very secure packaging in which the product traveled. Also here Lian Li has not spared so that the case arrives intact at the customer.

The installation of the components went very well. All important places were easily accessible, which is also due to the easily removable side panels. As soon as the lid was loosened, the front and side could already be removed. The well-known from-above-insertion principle of Lian Li found its way here, too, of course.

But did the space in the case suffice for us? Yes, it absolutely did! If you don’t happen to have only 360 mm radiators lying around, you’ll get along very well with the space. Despite the ATX power supply, we were able to install our not exactly small tower fan. This has to be done skillfully. And only being able to install a maximum of 280 mm radiators doesn’t have to be a negative point. However, I imagine it to be quite tight to get a custom water cooling under here. It must be very well measured and the right hardware must be found. Maybe the limit is found here. But who wants to deal with custom cooling can easily reach for the bigger siblings.

For those who value airflow and want to retain full functionality and flexibility in a mid-sized case, this is the right choice! 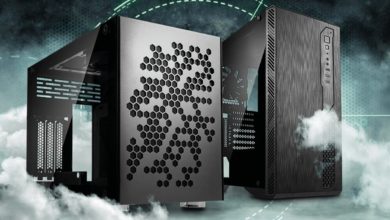 Lian Li has also introduced the O11 Air Mini along with several other products at its DIGITAL EXPO 2.0. Thus, the popular O11 family gets a new offshoot, which advertises with extra airflow. Whether the attempt to build a case that advertises with „mini“ and an airy design, but not lose the high demands on … (Weiterlesen...)