The Darfon subsidiary QPAD not only offers mice and keyboards, but also several gaming headsets. The most expensive of the models, the QH-700, is in our test here.

QPAD currently sells the headset for 100 Euros. The company promises the usual qualities for the called price: The QH-700 is supposed to offer a high playback and recording quality and at the same time adapt to the head’s shape with various degrees of freedom. Whether all these promises are justified, we clarify in the following.

When it comes to the scope of delivery, QPAD provides a fairly standard package: in addition to the QH-700 itself, which already has the four-pin connector cable permanently mounted, there is another cable with two three-pin connectors, a clip-on microphone, and a short manual.

The QH-700 relies on a typical design: The two ear cups are tiltably mounted between two pivoting metal arms each. Both arms are connected by the padded and leatherette-covered headband. This can be extended by a total of 35 mm in nine steps on each side.

The audio cable is attached to the left ear cup, which also houses the jack socket for the microphone. This consists of a rigid plastic arm, so the recording diaphragm is located at a fixed point to the left of the mouth. In addition, there are two controls on the left ear cup: a mute button for the microphone as well as a volume wheel, through which the audio signal of the playback device can be attenuated afterwards.

The QH-700’s headband is made of metal, as mentioned earlier. Away from it, QPAD relies on synthetic leather and plastic. The latter is largely matte black, but there are some high-gloss elements on the ear cups as well.

The headset’s build quality is good: all individual parts are neatly crafted and firmly connected. We couldn’t find any workmanship flaws, but some PC users might have wished for a nylon sheathing for the cable splitter. It is also noticeable that there is a light-colored stripe behind the cover fabric in the left ear cup, which stands out against the otherwise black background.

The QPAD QH-700 can be adjusted in height and has tiltable and rotatable ear cups – this allows the headset to adapt well to different head shapes. We found the headset comfortable even after several hours of use: the maximum height setting is comfortable even for people with large heads, and the tilt and swivel features go far enough to fit perfectly.

We also liked the contact pressure: Tight enough for the headset to fit properly, but still loose enough not to bother you even after a long time. Those who are very sensitive to heat might only be bothered by the heat development on the ears: For an over-ear headset, the QH-700 is absolutely within reason here, but the ears do get a bit warmer due to the design.

With regard to playback quality, the QPAD QH-700 can convince in many points. In the mids and highs, the QH-700 struck us as present, but at the same time not overbearing. Downwards, audible frequencies are possible from about 40 Hertz, but low tones only become really present later. A real low bass is thus not present, the tuning is rather focused on higher frequencies. Again, the sense of space that the headset can convey is positive.

It also looks good in principle in terms of noise: There is no background noise or other conspicuous features in the sound reproduction itself. Nevertheless, we could hear a quiet, crackling noise throughout the test, which obviously comes from the ear padding. This interference did not completely disappear even after a longer wearing time. We can’t say for sure whether we got a Monday model here or whether the problem affects all headsets.

The recording quality of the headset is good: The timbre is not perfectly true to the original, but slightly discolored; however, apart from that, the microphone is consistently successful. There is no significant background noise, and the recording diaphragm is far enough away from the mouth to not overload on the critical popping sounds. Thus, for everyday voice chat use, the QH-700 is well suited.

With the QH-700, QPAD offers a headset that can convince in several points. For a starting price of €100, the company promises typical features with various ergonomic options as well as good playback and recording quality – and these promises can largely be kept.

There is nothing to complain about in terms of build quality on the QH-700, and the ergonomics in particular could convince us: even after several hours, the headset did not make us uncomfortable. The microphone is also well implemented: The timbre is not quite perfect, but the speech quality is well sufficient for everyday use.

The playback quality also looks good in principle, but new standards are not set here. The bass might be too restrained for some users, but we were impressed by the headphones’ sense of space. However, our listening experience was marred by the crackling ear padding.

If you are not too sensitive to noise and can thus block out the quiet crackling, you will be able to enjoy the headset.

A headset with good three-dimensionality and restrained bass. 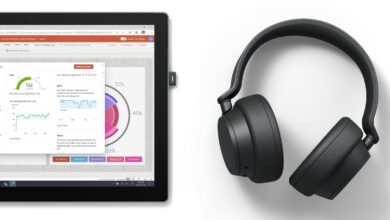