The Sensei was once one of the most popular gaming mice from SteelSeries. Over the years it became visibly obsolete and was forgotten. Not so long ago its manufacturer revived it. The proven design is joined by the latest technology. So the Sensei should be able to act as Sensei Ten again on the height of the time. We were able to test the new model.

We can deal with this point very briefly: The mouse is delivered with a connecting cable and the usual notes. More is not necessary for operation. The software, with which numerous settings can be adjusted, can be obtained via the Internet. It is available free of charge.

The Sensei design is simple. No unusual elements, bright colours or similar extravagances are used. Only the manufacturer’s logo is relatively large – it can also be illuminated. In addition, the mouse wheel is equipped with RGB LEDs.

However, the mouse is very well processed. SteelSeries relies on a rubberized surface that feels very good and makes sure that the mouse lies comfortably in the hand and is highly unlikely to slip away.

The fact that the mouse can be operated with both the right and the left hand without any problems is worth mentioning. This is due to the symmetrical design of the Sensei Ten.

The lighting has already been mentioned: both the mouse wheel and the manufacturer logo can be illuminated. The lighting is controlled by the software, which we will discuss in the next section.

The mouse is also equipped with a total of eight keys. In addition to the two main buttons, which are equipped with a two-spring mechanism and are expected to have a lifespan of 60 million clicks, the Sensei Ten has two thumb tests on the right and left sides, a clickable mouse wheel and a button located directly behind the mouse wheel. All buttons are within easy reach. The fact that the thumb buttons are located on both sides also makes them easier to use with both hands.

However, the heart of the device is the sensor. A modified version of the model PMW 3389 from PixArt is used. In the modified version it is called True-Move-Sensor. The basis of this sensor is also used in other gaming mice, such as the Mamba Elite and the Viper from Razer.

SteelSeries claims to have redesigned the sensor to achieve a resolution of 18,000 DPI. The tilt tracking has also been improved, which basically means that the sensor can compensate for unintentional mouse movements. You can find out whether this really works in the paragraph “Practical test”.

We can already state that the Sensei Ten is an extraordinarily well equipped gaming mouse. The sensor promises a lot and the stated lifetime of the mouse buttons is above average.

The software is not required for operation. If you want to influence your mouse, you should use the software Engine 3. It can be downloaded from the SteelSeries website.

The software presents itself quite slim at first, which is certainly an advantage, as it helps with orientation. Nevertheless, SteelSeries does not forego additional features. So it is not only possible to adjust the resolution of the sensor and the illumination. The software also has a game integration and a Discord interface. The RGB lighting of the mouse can be used to draw attention to incoming notifications and the like. Since the hand lies on the mouse during use, this only helps when you are not sitting at the PC.

Macros can be set individually and saved in profiles. There are also suggestions from which you can choose. Overall, we are very satisfied with the software, as it offers many possibilities without being confusing.

Of course, the Sensei Ten has to prove itself especially in the practice for which it was made. Therefore we have dedicated ourselves to the practical test. First of all, we found that the mouse not only fits well in the hand, but also glides comfortably over the mouse pad. It is neither too light nor too heavy. However, if you have very small hands, you might have difficulties dealing with the Sensei Ten appropriately – but this should only affect very few people.

We also liked the optimized sensor very much. The mouse reacts precisely and quickly to inputs. The mouse pointer doesn’t break immediately when you take off slightly, which quickly happens unintentionally – so the promised compensation by the sensor is actually given. The only negative point we noticed in the test is the relatively high resistance of the mouse buttons. However, we could get used to it after only a short time.

Overall, the mouse is also very suitable for fast games. The mouse pointer follows every movement without any noticeable delay. Every input is implemented immediately. The user experience is pleasant. We are very satisfied.

It can be said that the comeback of the Sensei is quite successful. The new Sensei Ten convinces with a restrained design, precision and high speed. It is therefore suitable for use in the gaming sector and can presumably make the decisive difference. The sensor is outstanding, the workmanship successful and also the other equipment convincing. If you are looking for performance with which you can also survive in professional eSports, you should go for Sensei Ten. There are only slight triggers for the ergonomic features, as the mouse is not too easy to operate with small hands. 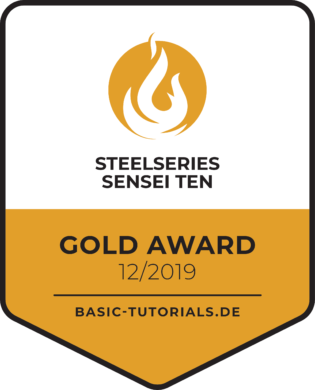