The ROCCAT Titan Tactile Switches of the ROCCAT Vulcan 80 have a noticeable and low-noise actuating distance of 1.8 millimeters, with a total actuating travel of 3.6 mm. This makes the ROCCAT Titan Tactile Switches perhaps the most comparable to the Cherry MX Red Switches. However, since I have mostly used rubber dome keyboards, an evaluation of the Titan Tactile buttons is relatively difficult for me. The change from Rubberdome to the ROCCAT Vulcan 80 seems easier to me than the change from MX Brown switches, which I tried years ago.

The concave keys are very comfortable and comfortable to use even during longer gaming sessions or when working with the keyboard. The individual 109 keys are also provided with a blue backlight, which can be adjusted in eight brightness levels via one key. It is also possible to deactivate the lighting.

All keys are configurable thanks to a 512 kB built-in macro and settings memory, and some are double-assignable with ROCCAT Easy-Shift[+] technology. The keys are programmed using the ROCCAT Swarm software, which can be used to configure other input devices from the manufacturer in addition to the ROCCAT Vulcan 80. In the menu item “General Functions”, for example, sound effects can be activated so that typing noises are reproduced with the nostalgic sound of a typewriter or the futuristic “rays” effect. In the menu item “Key assignment” – surprise – some of the keys can be assigned macros or other functions.

You can use the macro manager to manage macros you have created yourself. At the same time, existing macros can also be deleted here if the overview is lost. For some games there are already folders and macros available, which can be extended as desired and even sharing your own macros is possible. Profiles can be created and edited using the Profile Manager.

Creating a macro and assigning it to an Easy-Shift[+] function is very simple and intuitive. In the “Key configuration” tab, simply click on the key to be assigned, then drag and drop the “+ Add new macro” button onto the “Easy Shift[+]” button. Now the pop-up “Macro Quick Recording” opens, with which the macro is recorded. It is also possible to set the delay between each keystroke and a macro repeat. The game mode must be active to retrieve the macro for game using the Easy-Shift[+] function. This is switched on by key combination (“FN” + “Roll/Game Mode”). If the game mode is active, the corresponding function LED under the Enter key of the numeric block lights up. 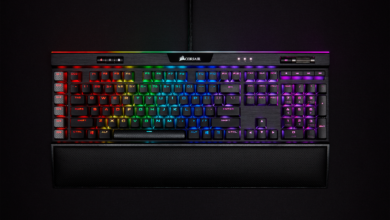