With the U3421WE and U2421E, hardware expert Dell has introduced two new additions to the range of monitors. Both monitors are expected to offer interesting features. The U3421WE comes with a curved display, the somewhat smaller U2421E monitor with the ComfortView Plus feature. This is a TÜV-certified reduction of the harmful blue light component in the image display.

The larger representative of the two new introductions, namely U3421WE, does not only appear in the bent state. With a picture format of 21:9 and a screen diagonal of 34 inches, it also offers the best conditions for gaming and office applications. The ultasharp monitor uses an IPS panel with a resolution of 3,440 x 1,440 pixels (WQHD). Dell has given the monitor a very strong bend with 1900R. This should provide a good overview and immersion due to the 34 inch screen. At 60 Hz, the U3421WE does not offer an exceptional refresh rate. For most applications, however, this should be absolutely sufficient. The brightness values are also not from another star. The monitor comes along with a brightness of 300 cd/m². This provides an average contrast value of 1000:1, a value we often see on IPS panels. The IPS panel is definitely beneficial to the viewing angles. Here the monitor offers a maximum of 178 degrees viewing angle stability. In terms of response time, manufacturer Dell specifies 8 milliseconds (gray to gray). If the monitor is in the optional fast mode, the reaction time drops to 5 milliseconds again.

A glance at the back of the large monitor reveals many connections. Thus, the user has 2x DisplayPort as well as 2x HDMI 2.0 available. Furthermore, Dell provides the monitor with a USB-C port. The same can also be operated in an alternate mode as DisplayPort 1.4. The USB-C port is also capable of delivering up to 90 watts of power. This is especially practical if you want to use your notebook not only for image transfer, but also to charge it at the same time. In addition to the strong USB-C connection, the curved monitor also has a USB-C connection with 15 watt power delivery. Furthermore, the U3421WE has 4x USB-A ports. For those for whom the two built-in speakers with 5 watts of power each are not sufficient, the monitor offers a separate audio output.

With the U3421WE, Dell focuses on a high level of user-friendliness. This becomes clear among other things with the KVM function. This practical feature ensures that the monitor automatically recognizes which computer was last connected to it. This pays off especially when the monitor is connected to two computers at the same time. This enables functions such as Picture by Picture or Picture in Picture. A practical KVM switch is used so that you don’t lose track of what’s going on when you’re operating the monitor. With the help of this switch you can easily switch between the two connected computers. Thus, one mouse and keyboard is sufficient to operate both computers. In addition to this feature, the monitor can also be individually adapted to the user. The U3421WE can be adjusted by 15 cm in height. The tilt can also be selected between -5 and 21 degrees. Rotations of up to 30 degrees to the left and right are possible.

The Dell UltraSharp U2421E may be smaller than its curved sibling, but it doesn’t have to hide behind the larger monitor. This is the successor of the popular U2415. The monitor comes with an aspect ratio of 16:10. The display has a resolution of 1,920 x 1,200 pixels. We also find a practical USB-C connection here. Like its big, curved brother, this one can be used not only for image transfer, but also for charging the connected notebook with up to 90 watts. With a brightness of 350 cd/m², the U2421E even looks a bit better than the 34-incher. 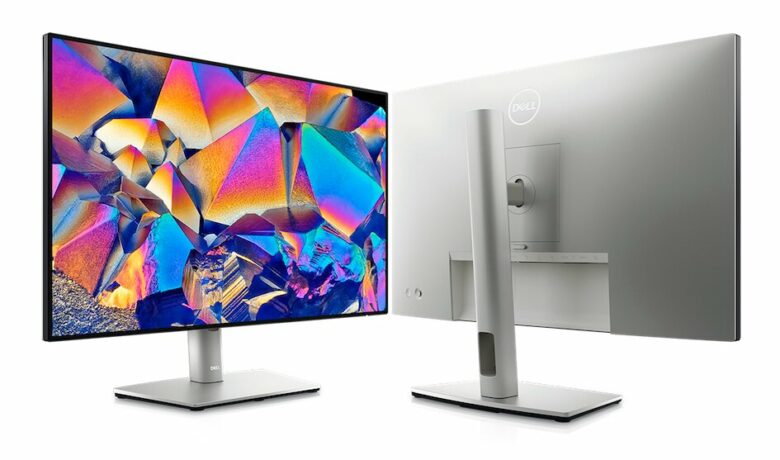 The so-called ComfortView Plus is designed to help people who spend many hours a day in front of the monitor. Many scientific studies have shown that the so-called blue light is harmful to health. That’s why Dell has chosen ComfortView Plus for the monitor. This hardware solution reduces the blue light component of the U2421E immensely. However, the accurate color display is still maintained. As a result, the image should not have the usual yellow cast that normally occurs with other devices when reducing blue light. To achieve this, Dell has made sure that the wavelength of the unwanted blue light shifts from a harmful to a safe range. Since the technology has already received certification from TÜV Rheinland, it seems promising. But the monitor not only prevents headaches thanks to its ComfortView Plus. It can also be individually adjusted to prevent neck pain. Thus, a tilt between -5 and 21 degrees is possible. It can be turned to the left and right by 40 degrees each. The height can also be adjusted by 15 cm.

The optional magnetic soundbar is supposed to provide a good sound. It can be attached to the lower frame of the U2421E. After connecting it via USB, it should provide uncomplicated and problem-free sound playback via plug and play. Inside the so-called Dell Slip Soundbar, 3.6 watts of power slumber. This should probably be enough for most users.

Manufacturer Dell has obviously revised the design of its monitors. This is also the case with the models U3421WE and U2421E. Here, the company has opted for a silver case, which has been designed differently from the previous models not only on the outside, but also in terms of operation. Thus both newcomers offer a so-called OSD joystick on the back. This is used to operate the OnScreen display.

The Ultrasharp 24 USB-C Hub Monitor (U2421E) can be purchased immediately in German stores. Here a UVP of 339 euro results. Who is interested however in the 34-inch large curved monitor, must be somewhat more patient. So the UltraSharp 34 Curved USB-C Hub Monitor is to be available in German retail stores from December 1. Here 1,030 euro are to result.