PCIe 5.0 should finally be launched at the end of the year. The latest version of the fast interface should then be able to transfer twice the amount of data that representatives with PCIe 4.0 currently still manage. Certainly, especially fast flash memories will be able to benefit from the fifth generation of the interface. One manufacturer of the suitable controllers is Marvell. The company has now presented the first products, which we want to take a look at.

Two controllers with PCIe-5.0 are to come

Marvell wants to launch two controllers for PCIe-5.0 at once with its MV-SS1331 and MV-SS1333. While the former is supposed to offer 8 channels, 16 channels are used in the SS1333. The field of application for the controllers is already clear. They are to be used primarily in data centers with their PCIe Gen5 x4 interface. Since we can expect data transfer rates of 16 GB/s here, the professional use is not surprising at all. Especially compared to the fourth PCIe generation, which “only” achieves a maximum of 8 GB/s in the PCIe Gen4 x4 version, the leap in speed is really impressive.

Marvell doubles the transfer rates without further ado. At the heart of the controller are said to be 10 CPU cores, which should not only provide pure processing power, but also reliable data encryption. The version for data centers also offers a practical dual port mode, which is supposed to be available as an option. Here, you get PCIe Gen5 x2 twice instead of PCIe Gen5 x4.

This is how fast the SSD future is

The transfer rates mentioned above are so-called gross values. If you take a look at the practice, the values are much lower, but still impressive. Thus, up to 14 GB/s are supposed to be possible during reading. The write speed is supposed to be a maximum of 9 GB/s. However, the other data also reads very well and makes the hearts of fast flash memory fans beat faster. Thus, 2 million IOPS are said to be possible in random reading and 1 million IOPS in writing. The whole thing is crowned by the extremely low latency, which can be seen in the controller’s data sheet. This is supposed to be below 6 µs.

But what about the DRAM cache? Here we can probably expect standard technology and no surprises. DDR4 with a maximum of 3,200 MHz as well as LPDDR4 with a maximum of 4,266 MHz should be supported by the controller. Meanwhile, the chip’s case is surprisingly compact. The large version with 16 channels is supposed to measure just 20 x 20 mm. This means that it can probably also be installed in more compact platforms.

Marvell talks about a maximum power consumption of 8.7 watts for the “small” version with 8 channels. For the larger version with 16 channels, the power consumption is said to be a maximum of 9.8 watts. In terms of compatibility, the manufacturer also seems to have thought of everything. The most common 3D NAND versions are supposed to be supported with SLC, TLC, MLC and QLC.

Being ahead of the times does not always have to be an advantage. PCIe Gen5 is no different. Thus, Marvell offers the suitable basis for the fast interface with its controller, but corresponding platforms are still missing to make the luck perfect. So we’ll have to be patient until the first SSDs that rely on Marvell’s modern and blazingly fast controllers hit the market.

Business customers will probably enjoy this faster than the “conventional” clientele. The first platform that wants to support PCIe Gen5 is said to come from Intel. With “Sapphire Rapids”, a corresponding platform for servers is supposed to be launched this year. The competitor AMD wants to follow up next year with “Genoa” and also support the latest generation of the fast interface. We are looking forward to the speed leap soon! 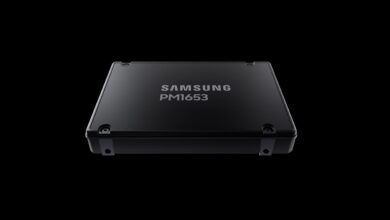 PCIe 5.0 should finally be launched at the end of the year. The latest version of the fast interface should then be able to transfer twice the amount of data that representatives with PCIe 4.0 currently still manage. Certainly, especially fast flash memories will be able to benefit from the fifth generation of the interface. … (Weiterlesen...)