When the Goliaths of the gaming chair industry face each other on the market every year, flaunting the latest innovations and designs, we inevitably talk about established names like noblechairs, SecretLab or DXRacer. Since 2019, however, a David has also been getting in on the action and taking on the big names in the industry. We are talking about the German brand Backforce.

However, if you look behind the scenes, there is no start-up behind the brand that wants to trigger a revolution with a lot of ambition. Rather, there is a Goliath behind Backforce as well. As part of office chair manufacturer Interstuhl, the brand can draw on more than 60 years of experience, which gives Backforce an advantage over smaller, also newer manufacturers. Nevertheless, the company has started a revolution with the new brand!

Now that we’ve had a chair or two from the big brands and both gaming chairs from Backforce in testing, we asked ourselves one question: How does the brand new brand perform in direct comparison with its big counterparts? We start the comparison series with Backforce versus noblechairs.

Corner data on the companies

After our testing of Backforce’s One and One Plus chairs, we were blown away in both cases. Not only did we get to see a completely new idea of design, but we could hardly find a flaw with either of the chairs. Only in the case of the first chair, the Backforce One, did the brand have to accept a point deduction, as one or two features came up short for us.

Lo and behold, Backforce not only took our feedback to heart and released an improved version with the One Plus. This one almost made it to full marks; it’s still in our top ten of all gaming chairs we’ve tested.

First and foremost, the handcrafted nature of the Backforce chairs and the Made-in-Germany quality mark deserve a mention. Considering the masses of Chinese goods that frequent the gaming market in many ways, definitely points that may be on the figurehead. Next, the design is impressive, which is tantamount to a revolution. Although you won’t find the typical holes in the backrest on the noblechairs HERO and other manufacturers, they all still look the same from behind. Not so the models from Backforce. Here, both the back and the front have been worked on down to the last detail to create a futuristic and very robust body.

The result: the backrest is adorned at the back with a multi-layered plastic shield and an LED light called Gamer Pulse. This is customizable, as are the patches on the backrest’s shoulders – also a first. Inside, the Backforce chairs hide a molded wood panel in the backrest. The best thing you can do to your back, as wood is more resilient than any plastic, but at the same time very strong.

Backforce has those certain extras

And if that’s not enough positive features to highlight, Backforce also initially pioneered a brushed aluminum base, a wide choice of colors, seat depth and tilt adjustments, and fold-away backrests. But the flexible lumbar support, which can be adapted to really any back, and the high-quality materials throughout are particularly impressive. The cover, for example, is made of recyclable Alcantara leather. Basically, both of Backforce’s chairs are a find for the environmentally conscious, as everything on the One and One Plus is recyclable. But until then, you’ll have something from the gaming chairs for many years to come.

The bottom line is that office chair expert Interstuhl’s impressions are evident at every corner of the Backforce chairs. The brand has quickly made a name for itself in the gaming industry, and rightfully so. Sponsorships for e-sports organization BIG, streamer fundraiser Friendly Fire and Team Paluten more than prove that.

More detailed info on the two gaming chairs from Backforce can be found in the two reviews:

Check out the Backforce One Plus!

Now that we’ve handed out numerous laurels for Backforce, we’re not going to stop there; after all, Berlin-based chair manufacturer noblechairs also knows how to keep gamers comfortable and on the seat of their pants for a long time.

At the same time, the brand already has a few years head start and has already released three models, the EPIC, the HERO and the ICON. All of them have their peculiarities, but they are united by high quality, impeccable workmanship and well thought-out concepts. However, the focus is less on eye-catching color accents, as we have seen with the Backforce chairs, much more the manufacturer wants to come up with a classy look.

In this respect, the three models definitely complement each other. While the EPIC, noblechairs’ first chair, delivers a familiar racing shell look with still few features, the ICON emphasizes just the latter, but keeps its look subtle, making it much more reminiscent of a high-end office chair. The showpiece from noblechairs goes by the name HERO and is indeed a true hero: flexible lumbar support, high load resistance and 4D backrests and optimal padding for many hours of gaming at the highest level.

noblechairs lives up to its name by making gaming chairs that more than deviate from the norm. They don’t conform to the typical look and are meant to bring a classy nuance to the gaming room. Accordingly, all three models are also available with genuine leather, which is a rarity among gaming chairs. But: genuine leather also requires significantly more care than other covers.

noblechairs’ cooperations with the e-sports organizations MouseSports or Sprout show that the quality also holds up at the highest level.

Detailed info on noblechairs gaming chairs can be found in our reviews:

Top models: the Backforce One Plus compared to the noblechairs HERO

So Backforce and noblechairs are definitely on par with each other. In the end, it’s the buyer who decides which German manufacturer comes out on top in this case. Because if you compare our reviews, we couldn’t come up with a winner purely on the basis of the facts. However, a poll among our editors has resulted in a majority vote for Backforce – primarily due to the synchronous mechanism and the fold-away armrests.

If we compare the flagships of the two manufacturers – the Backforce One Plus and the noblechairs HERO – visually, the elegant and high-quality exterior immediately stands out. You don’t get the feeling that you’re looking at something made in China. The careful workmanship, which is done by hand at Backforce, the long-lasting comfort, and the number of seat settings are also something they still have in common. Only then do the chairs start to differ.

While that’s it for the HERO, Backforce goes a few steps further and provides its One Plus with extras like the Gamer Pulse as well as Patches, both of which are customizable. In addition, the back of the chair stands out, while the noblechairs are merely unfinished.

If you want to count a high-quality gaming chair among your possessions, which also lasts for a very long time, you will inevitably have to dig deep into your pocket. However, the buyer also gets something for it. In the cases of Backforce and noblechairs, this hits the nail on the head.

At 629 euros, the Backforce One Plus offers itself expensively. If you choose the HERO from noblechairs with genuine leather, it also comes to 660 euros. But both manufacturers also have cheaper models in their range: so the Backforce One is available for 499 euros and the noblechairs HERO also for 400 euros. With the Backforce One one does thereby without a flexible lumbar support or also padded armrests – which one can buy however afterwards. noblechairs HERO comes only with vegan PU leather along, must do without however otherwise on nothing.

The price-performance ratio is okay in both cases, and even better in the case of Backforce. Because you not only get top features and hand-mastered workmanship for your money, but also durability. Backforce guarantees this for 10 years for every single unit. noblechairs users, on the other hand, always point out signs of defects after 2-3 years. So in the end, the money is more sustainably invested at the made-in-Germany manufacturer Backforce.

At the end of the comparison of the two outstanding German manufacturers of gaming chairs, it only remains for us to sum up that in both cases you are not necessarily getting something wrong in your house. Both the One Plus from Backforce and the HERO from noblechairs, for example, offer extensive features that let you sit for a long time. Backforce only goes further into detail and gives its chairs customizable goodies as well as a chic back. In addition, the chairs score points with seat depth and seat tilt adjustment.

But if you don’t want to pay twice, it’s better to rely on Backforce’s durability. Every stitch, every step is handmade here exclusively in Germany. The company offers a 10-year warranty – which is quite a number for a gaming chair.

Buy Backforce One (Plus): Why you should be quick now 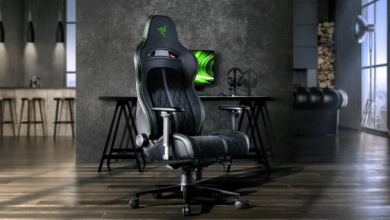 Razer Enki Pro in test: How comfortable is the premium gaming chair?

When the Goliaths of the gaming chair industry face each other on the market every year, flaunting the latest innovations and designs, we inevitably talk about established names like noblechairs, SecretLab or DXRacer. Since 2019, however, a David has also been getting in on the action and taking on the big names in the industry. … (Weiterlesen...)