Laser engraving machines are a dream for every individual who loves DIY projects – why? No matter whether wood, aluminum or acrylic glass can be engraved and cut so with a machine. This of course opens doors for many creative projects.

The only drawback in most cases is the price of these machines. Atezr offers the P5, an inexpensive entry-level model with a simple setup within 20 minutes, large engraving area and high precision.  How the laser engraving machine from Atezr performs in the practical test for a beginner, we will now find out in our test.

Technical details of the Atezr P5

The P5 is delivered in a brown cardboard box without a recognizable label or logo on the outside. If you open the package, the respective individual parts are carefully packed in black foam. Furthermore, apart from the machine itself with a toolkit for screwing it together, three wooden boards, the user manual and accessories for operating the machine are also included. Last but not least, it is worth mentioning the safety goggles that come with the machine for protection against the laser.

The assembly is done in a few handy steps. According to the manufacturer, it takes about 20 minutes for the entire assembly – we had to cover this with 10 minutes. However, this was due to the unwieldy supplied tools. In total, you have to connect five axles with each other. Three screws are screwed to the frame for this. Once the frame is in place, a rod for the laser head is screwed on top. Finally, the four feet must be screwed together with three screws per foot. Now the frame is ready and only the cables for the control of the axes have to be plugged in.

Overall, we were particularly struck by the quality of the frame during assembly. Not only does this one look powerful, but it is also so sturdy and visually eye-catching. In addition, the frame was easy to put together and the individual parts of the P5 have a high quality.

There are several options for operating the P5. For the sake of simplicity, we only present the variant via app in this review. However, it is still possible to control the machine via software (for example LaserGRBL or LightBurn) directly via a USB-B port, or by inserting an SD card with G-code on it. The “Atezr Laser” app is available for free download in the Apple App Store and Google Play Store. The P5 can then be connected to this via a local Wifi hotspot. You have to allow about 5 minutes for the setup.

In the app itself, one has a total of four functions available – photo, resources, characters and local files. To connect the machine to the app, you first have to do a super simple configuration. To do this, navigate to the connection icon on the top left and press connect. This will take you to your phone’s WLAN settings, where you can connect to the P5’s WLAN. Back in the app, you’re already done and the first engraving can start.

For the very first attempt, we chose an apple, which is already available as a motif in the app. After you have chosen the motif, this is processed as a “.gcode” and transferred via WLAN to the P5, on the SD card located in the card slot. The next step takes you to a control interface that prepares the laser engraving machine for the start of engraving.

The first thing you need to do is to tap the home button so that the laser head moves to its start position. After that, another click on “Show frame” and the laser moves once along the outer frame of the motif. Based on this, the material can be positioned. Before you can start, you have to set the height of the laser head. To do this, a small and rather awkward adjustment rod on the side of the laser head is folded out until it hits the material and thus the perfect height is fixed.

After the start and a rather short waiting time of about 15 minutes for small motifs, the engraving is already done. In the first attempt we chose wood as material and directly made a small mistake: Not adjusting the speed and the thickness. The engraving ended up looking very black and burnt, but the edges of the motif were perfectly and accurately engraved.

In then second attempt, we followed the settings recommended in the manual and now used a picture as the motif. After the next run the results looked better. At this point, however, we would have liked to see a function in the app that allows you to select the material to be engraved so that you can directly use the recommended settings.

Ongoing, no problems have been encountered with any other material, except for clear acrylic. In our test, it was not possible to get a perfect engraving without branding. No matter how and with which substrate, unfortunately the results were always poor. With colored acrylic, however, the problem did not occur.

To return to the opening question. Is the P5 from Atezr a good model for beginners? We can confirm this question with a clear conscience. The machine itself is robust and stable, easy to set up and can be controlled via the app with just a few simple steps. Especially when it comes to wood engraving, the P5 does a great job for a fair price. The operation via app is reliable and goal-oriented, but some additional features could be implemented in the app.

Other materials can of course also be engraved, but this requires more preparation and testing of the settings. Especially as a beginner, you have to fumble through the material a bit to create results worth seeing. In conclusion, the P5 is a sensible and good investment if you want to get into the DIY world of engraving.

The P5 from Atezr is a good entry-level model for those who want to start engraving. The quality and handy condition have convinced us. 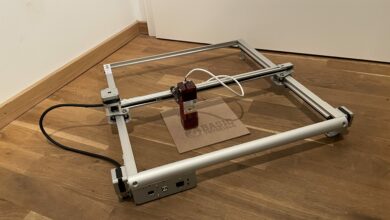 AUFERO LASER 2 in test: What can the entry-level laser do?

ATOMSTACK A10 PRO: Get one of the best laser engravers on offer

Laser engraving machines are a dream for every individual who loves DIY projects – why? No matter whether wood, aluminum or acrylic glass can be engraved and cut so with a machine. This of course opens doors for many creative projects. The only drawback in most cases is the price of these machines. Atezr offers … (Weiterlesen...)