The “Skyroam Solis” is a peculiar device whose practical use is not immediately apparent to most people. To a certain extent, it is a “mobile router” that guarantees access to the mobile network at all times and is therefore likely to be used primarily on trips abroad.

Those who only rarely travel will now object that flat rates abroad and WLAN access to hotels and restaurants abroad would be completely sufficient. However, frequent travellers and people travelling in distant regions know that these access points are not always reliable, safe or economically viable. It is precisely this clientele that the Silicon Valley-based start-up with its bright orange box is addressing.

The most striking optical feature of the mobile Internet provider was already anticipated in the last sentence: It’s kept in bright orange. At first sight, this colouring seems irritating. The start-up company Skyroam, however, provides a profoundly pragmatic explanation of the unconventional color scheme: Thanks to the extraordinary color, the small, round device can hardly be overlooked, which minimizes the danger of forgetting it on a journey. The test shows that the penetrating appearance of the Solis actually leads to the fact that it can hardly be forgotten. If you are in a room with the device, you can hardly turn your gaze away from it.

Ultimately, the idiosyncratic colouring behaves like other idiosyncratic things: Although they initially only cause irritation, they continue to attract attention even after the first surprise has died down. The Solis has something magical about it – you have to look at it and with the passing of time you are surprised to find more and more pleasure in the extroverted presentation of this device.

The goal of reminding forgetful people to take their Internet box with them can therefore confidently be described as achieved. In addition, not much can be said about the design and workmanship of the box. The Solis is small and practical. Its bright colour is striking in any place. Otherwise, it’s very simple. Only two buttons can be found, the function of which will be examined in more detail in the further course of our test.

The workmanship of the device can be described as good. Defects cannot be found. All in all, it is an idiosyncratically designed, but very well manufactured device.

However, the inclined user is less likely to lose himself in pondering the effect of the colouring. He is particularly interested in how the device is operated and what it can offer. At this point it should be mentioned that the subject of operation is again a source of irritation: will two perfectly ordinary buttons be enough to control this device? However, the inevitable frown quickly gives way to an expression of joyful relaxation – Skyroam could hardly have made the controls of its device simpler and more self-explanatory.

Before the device can be used, however, a little time must be invested. Since Internet access is required for the installation, Skyroam offers new users free access to the mobile Internet for twenty minutes. When installing the device, a laptop should be available so that these precious minutes are not wasted.

In addition to the name of the network and the password required for access, there is also an Internet address on the underside of the Solis. This must be called in the browser after the device used for configuration is connected to the hotspot. On this page the device will be registered. In addition, day passes can be purchased via this page.

In principle it can be said that when using Skyroam it is noticeable that simplicity and intuitive comprehensibility are very important. In practice, this is clearly positive overall.

First, it should be noted that assessments of practical benefits are always subjective. For people who are rarely dependent on mobile Internet outside their home country, this orange box has at most a decorative character. Frequent travellers, who for various reasons depend on fast, reliably available Internet anywhere in the world, will see their personal saviour and rescuer in need in this very box.

Ultimately, the use of the Internet makes sense above all when other ways of using the Internet are hardly possible for economic or practical reasons. If, for example, you are staying in the United States for a longer period of time and use the mobile Internet there, you can also fall back on cheaper alternatives such as local prepaid cards. But roaming is not particularly expensive in the USA either. The situation is often different in Asian countries. Here you can quickly pay 20 cents per megabyte. In such a case, Skyroam’s Solis with its flexible day passes can be the perfect solution. With this device, the user remains permanently flexible, as no mobile phone contract has to be concluded. The mobile SIM card is available at the touch of a button when you need it. 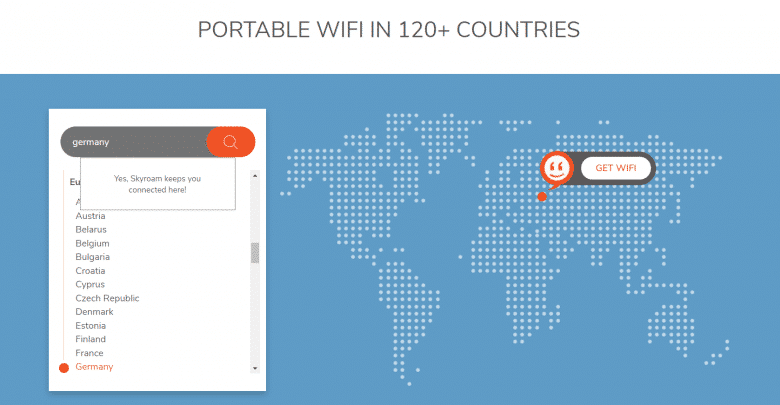 The service can be used in more than 120 countries. Skyroam has signed contracts with more than 200 local mobile operators for this purpose. On the website you can find out in which countries an Internet connection can be established. In any case, it is advisable to check this before purchasing the device. Anyone planning a trip to the former German colony of Namibia, for example, and weighing themselves on the safe side with Solis in their pocket, will be in for a nasty surprise, as there is no Solis partner in this country yet, which means that no Internet connection can be established there. In addition, mobile Internet must exist in principle in the country or region – not only in theory, but also in practice, which means that transmission masts must be available in the immediate vicinity of the Solis site. This may not always be the case, especially in less developed countries.

The practical benefit thus ultimately depends on the person of the user as well as on the demands of that person. Anyone who needs a fast, reliable Internet connection abroad will find Solis a useful device. If you go on holiday for two weeks once a year, you can confidently do without this pretty hotspot generator. The difference between a faulty purchase and a useful purchase is gradual and does not necessarily lie in the nature of the purchased device.

Anyone who is dependent on permanent Internet access when travelling is likely to attach great importance to the speed of this access. The Solis promises fast Internet, but can only partially keep this promise. In contrast to the hotel networks and similar Internet connections, which usually only function very sporadically to the fullest satisfaction, the Solis’ performance is at least acceptable even in the rather black moments. During our test the connection was not always stable and the Skyroam Solis took several minutes to set up a new connection.

It should be noted that this is not ultimately a breach of the promise in the strict sense. Much more the promise of the fast Internet – at least on the manufacturer’s website – is relativized. It states that a day pass, which costs eight euros after all, contains only 550 megabytes at unthrottled speed. If this data volume is used up, the speed is limited, which can become noticeable with intensive use of the hotspot. Unfortunately then only the 2G network is available.

Anyone who uses the device for professional purposes – such as replying to e-mails or accessing document repositories on the Internet – is likely to quickly reach the 550 MB mark. For in-between it’s enough, but during the test in the USA I also used several day passes per day to avoid having to continue surfing at a reduced speed.

The streaming of music and movies is of course only possible within very limited limits. Full multimedia entertainment on other continents is therefore only possible to a limited extent with the Solis.

Since the device must be permanently in operation in order to generate and maintain the hotspot, the battery life is also important. The 6,000 mAh should last for 16 to 20 hours. In the test, the battery life is definitely very positive. Even when used intensively as a hotspot for smartphones and for working on laptops in between, part of the battery is still available at the end of the day. So the battery’s big enough to take you through the day.

The battery is charged via the USB-C port. Skyroam also includes an adapter to charge other devices with a USB-C port. Then the battery of the mobile router is of course much faster empty.

Ultimately, it is difficult to draw a clear conclusion, as the Solis was developed for a very special target group. For the majority of people, it will not be a revolutionary device and will ultimately be rather useless. In its target group, however, it is a valuable device with the possibility of creating Internet access at the touch of a button that can hardly be dispensed with. The unique look gives the Solis a unique charm. In addition, the simple operation and the long battery life as well as the good workmanship are to be emphasized positively. Anyone who is dependent on Internet access on the move, who wants to remain flexible and does not want to take any risks, can with a clear conscience resort to Solis with its flexible day passes. In any case, it is worth comparing your smartphone with the roaming offers of your own provider or checking the purchase of a local SIM card in order to use it as a hotspot.