At the end of August Crucial introduced the third generation of its BX-SSDs. The new BX300 is available with storage capacities of 120, 240 and 480 gigabytes and is designed to eliminate the biggest weakness of its predecessor, the slow write rate. We will clarify whether this succeeds in our test.

According to Crucial, the BX300 should write with about 520 MByte/s and read with 560 MByte/s. Crucial no longer uses cheap TLC flash, but instead relies on high-quality MLC memory. The controller used is a Silicon Motion SM2258 with four memory channels, which accesses eight NAND chips.

The SSD also comes with a mounting spacer so that this thin SSD can also be used in laptops without the SSD flying back and forth. You also get a license for Acronis True Image HD.

Technical Data of the Crucial BX300 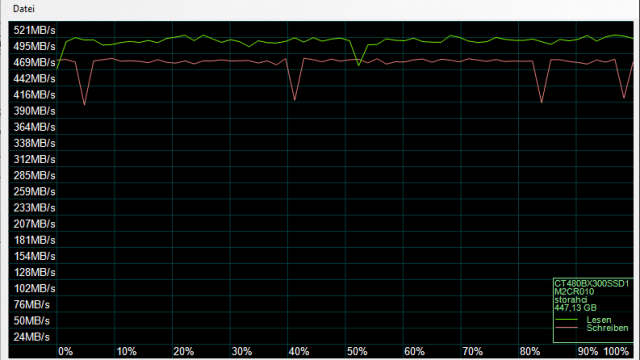 The third generation of Crucials BX series is clearly convincing. As promised, the write rate is at a permanently high level and both write and read rates scratch the limit of the SATA port. Thanks to the MLC memory used, the BX series no longer plays in the entry-level league, but has risen to the upper league. Exemplary for this is not only the speed and its performance stability, but also the long durability with a TBW of up to 160 TB.

So the Crucial BX300 knows how to convince, but has strong competition. Especially Samsung has made a name for itself and the Samsung SSD 850 Evo is on a similar level. Both technically and in price. As soon as the Crucial BX300 has arrived on the market and the price has dropped by a few Euros, I would prefer it.

The Crucial BX300 is a fast SATA SSD that can convince all along the line. This is ensured by the MLC memory used.

The VISION series from GIGABYTE gets a new addition with the new external USB 3.2 Gen2 x2 Type C SSD!