The manufacturer Kolink has meanwhile become an integral part of the housing segment. The line-up is large and there is a case for almost every taste. For all fans of RGB and asymmetrical designs Kolink has extended its own portfolio with an additional housing. The new development is called Kolink Balance ARGB and is a normal sized midi tower with many features. The case should convince by a lot of space, digital addressable RGB effects, tempered glass and a price of only € 54.89 *. If the Kolink Balance ARGB is recommendable you can read in this review.

Like all Kolink cases, the Balance ARGB comes well and safely packed in a brown box with black writing and is wrapped in normal styrofoam. To protect the side window from scratches, the manufacturer has covered the glass element with an additional protective film. The included accessories were fixed in a transparent plastic bag inside the case with a cable tie. This bag contains all important screws, five reusable Velcro cable ties and a cover for vertical mounting of the graphics card. The scope of delivery also includes the pre-installed RGB housing fan, the RGB element in the front, two magnetic dust filters and the partially pre-installed spacers. But what we are missing is a manual or at least a short instruction for all those who have never assembled a PC themselves.

Visually, the Kolink Balance ARGB is eye-catching, but does not look too playful. But let’s start with the outer view in the two-part front. Two thirds of the front consist of a simple black plastic and a ventilation grille. The left side of the front panel should serve to increase the airflow and is therefore made of a fine mesh. Between the two surfaces there is a slightly curved strip of milky plastic behind which the digitally addressable RGB lighting is located. When the front panel is removed, a magnetic dust filter and the mounting locations for up to three fans with a frame width of 120 millimetres are revealed.

If you look up, the large fan opening in the lid, which is usual for Kolink cases, catches your eye. This has mounting points for radiators and fans as well as a magnetic mesh dust filter. Furthermore, the I/O panel is located in the lid. There are three USB ports (1x USB 3.0 type-A, 2x USB 2.0 type-A), 1x headphones or 1x microphone and three buttons (power, reset, RGB control).

The left side panel is made of 4 mm thick tempered glass, is slightly tinted and does not protrude beyond the body. The side window rests on a steel frame which has been covered with two rubber strips and is attached to the back of the case frame with two normal knurled screws. The same applies to the right side panel. However, this is only made of steel, but has a pull-off aid. The stability of both side panels is good.

There are no special features at the bottom of the Balance ARGB. The tower stands on four feet made of plastic with thin rubber strips. In order to give the power supply clean air, Kolink uses a simple mesh dust filter without a frame or extraction aid. Finally, several screws can be seen here. These belong to the removable HDD cage.

The back side is almost the same as the usual standard of current midi towers. The power supply unit is mounted at the bottom, above it there are nine slots for PCI expansion cards. Seven of them are mounted horizontally and two vertically. So the Balance ARGB supports a vertically mounted graphics card. Unfortunately, none of the panels are reusable. Finally, the only pre-installed case fan with a frame width of 120 millimeters and RGB ring can be discovered on the back.

With the Balance ARGB, Kolink also relies on a two-part interior. The upper chamber has plenty of room for EATX mainboards and very long graphics cards. Eleven openings were worked into the mainboard tray. Ten of them serve as cable management openings and one should make it easier to mount CPU coolers with backplate. Because there are no hard disk bays behind the mounting area for front fans, they can transport cold air into the interior unhindered. As already mentioned, there is a pre-installed RGB fan and nine PCI slot bezels at the rear. Finally, the space above the mainboard should be emphasized. This could be especially useful when wiring or installing a radiator.

The two areas are separated by a power supply unit cover. This cover also has several cutouts for cables and a potential front radiator. Under the cover are the mounting position of the power supply and a simple but expandable HDD cage for two 3.5″ HDDs. Kolink also equipped the Balance ARGB with two additional frames for two 2.5″ SSDs and attached them to the rear of the mainboard tray ex works. Last but not least the eyelets for fixing cable ties are worth mentioning.

Processing and painting are to be assessed as proper both outside and inside and in relation to the purchase price. The varnish is evenly applied and there are no runners or sharp edges. The material thickness of the body and side panels is also OK.

Now we come to the system installation. As hardware we use a AMD Ryzen 5 1400 on a MSI B350 PC Mate with 32GB Crucial Ballistix Sport LT grey DDR4-3000*. The Ryzen is cooled by an EKL Alpenföhn Matterhorn Pure. For the image output a GTX 1060 6GB from Gigabte AORUS is responsible. The power supply does the non-modular Berlin Pro RGB 650W with RGB fan.

The Kolink Balance ARGB is a normal sized midi tower. Therefore the installation and cabling of all components was a piece of cake. Also the partly pre-installed spacers and the 22 millimeters behind the mainboard tray accelerated the process. By using one or two cable ties a tidy system can be installed in the Kolink Balance quickly and without much effort.

The balance is also quite good in terms of hardware compatibility. CPU coolers fit up to a maximum height of 160 millimetres and graphics cards up to a length of 370 millimetres. In addition, a 240 mm radiator could be placed in the lid and a 360 mm radiator in the front if required. However, a front radiator limits the maximum length of the graphics card. The manufacturer doesn’t make any official tasks to the power supply. However, an own measurement has shown that a 180 millimeter long power supply easily finds room when the HDD cage is still installed.

The mounting of the data carrier requires a screwdriver, but is very easy. Two large 3.5″ hard disks can be placed in the cage under the cover. Due to the rubber rings, the cage can be easily pulled out, loaded with 3.5″ hard disks and pushed back again. The HDDs are mounted using four conventional screws. The decoupling effect of the rubber rings is unfortunately worse than expected. SSDs find place behind the mainboard tray. The attachment is done by four screws on a special SSD frame.

The pre-installed fan has a frame width of 120 millimetres, has a digitally addressable RGB ring and is directly connected to the RGB control. Power is supplied via a SATA power connector. Unfortunately, this means that the fan is not adjustable. But that’s not quite as bad, as it is restrained in terms of volume. Only a slight noise is perceptible when the fan is closed.

Last we come to the temperatures that were reached in the Kolink Balance ARGB. During the load test, Prime95 (SmallFFTs) and FurMark were run at a room temperature of 20 °C for 15 minutes. Since the case fan is not adjustable, this test was performed in two different variants (CPU on standard clock, CPU overclocked).

If you compare the rates with other cases we tested, it’s noticeable that the graphic card is relatively warm with 70 degrees. One or two fans in the front would probably help here. In the standard configuration, it is therefore only recommended to use graphics cards with limited performance in the Kolink Balance. The maximum temperature of the not overclocked CPU is ok. However, if OC comes into play, the CPU’s temperatures rise significantly as well. This value could also most likely be reduced by front fans. Additional fans are therefore an absolute must in our eyes.

The Kolink Balance ARGB is based on two elements that can be controlled digitally via a 5V-3Pin connector on the mainboard. There is the RGB element in the front panel and additionally the case fan at the rear. If the used mainboard does not have such a connector, then a SATA power plug of the power supply is sufficient. This can be used to power both the fan and the RGB lighting. The switching of the modes is then simply done by the LED button in the I/O panel. Additional units can be connected to the fan via a Y-junction. However, the connection doesn’t correspond to the usual standard and we couldn’t find any fans with this special connection at the time of the review.

Finally, a few impressions of the lighting should not be missing in this case.

So what can be said finally about the Kolink Balance ARGB? This Midi-Tower offers a lot for a price of only € 54.89 . The workmanship and stability of the chassis are good and there is plenty of room for powerful hardware. The overall package is rounded off by tempered glass, digitally addressable RGB elements, a not too loud fan and dust filters on all openings.

These features, however, had to be cut back on in other areas. For example, the PCI slot panels are not reusable, the dust filters are only made of a coarse mesh and the only pre-installed fan is not adjustable. In addition, there is unfortunately the single USB 3.0 port in the front and the rather moderate airflow ex works. As so often, this is based on the price and the strength of the competition. And in the case of the Kolink Balance ARGB, this even comes from our own company. For example, the Kolink Nimbus we tested can be found in this price range. Although the Nimbus is more compact and offers a little less space, the larger fan opening in the front provides a slightly better basis for an air cooling system.

But if you are looking for a midi tower with RGB in the price range up to 55/60€, the Kolink Balance ARGB is an interesting and chic alternative. However, you can’t expect a perfect case as a buyer. 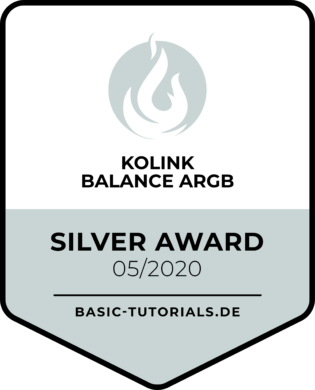 Chic and spacious midi tower with ARGB and tempered glass, but with slight weaknesses in airflow.