The Samsung Portable SSD T5 is available in four memory sizes from 250 GB to 2 TB. Samsung remains true to the memory sizes. This is certainly because SSDs are still expensive compared to HDDs and many people don’t see the point in buying an expensive external SSD. However, this can be worthwhile, because in all other aspects except storage space and price, an SSD has an advantage. If you need a rugged or fast external hard drive, you won’t be able to avoid an SSD.

New in the T5 series is that the USB Type C port is now connected with USB 3.1 and the use of Samsung’s 3D V-NAND in version 4. This has increased the transfer rates again, making 540 MB/s reading and 515 MB/s writing possible for all models. Otherwise, little has changed. The case is almost the same size, only 0.7 mm narrower in width. The changed colour design is more striking. The weight of 51 grams has not changed.

The Samsung Portable SSD T5 comes in a high-quality aluminium case. The little bit of plastic from the previous model, the Portable SSD T3, was painted. Only on the sides there is still some plastic, but the actual case is now made of one piece. The weight of 51 grams has not changed and the SSD is still very light. Combined with its small size, the Portable SSD T5 fits in any pocket and even transport in your trouser pocket is no problem.

Your data is not only well protected by the high-quality housing, because flash memory is also less susceptible than an old magnetic disk. Falls from a height of 2 meters pose no danger to the Portable SSD T5.

As already mentioned, the Samsung Portable SSD T5 still has a USB type C port, which now works with USB 3.1. Still, Samsung has made some changes: An additional cable is included, allowing the SSD to be used with type A and type C connectors. Thus the external SSD can also be used on the Samsung Galaxy S8 without an adapter. With the app the hard disk can be encrypted under Windows, Mac and Android. Samsung uses a 256bit AES encryption like with the T3.

According to Samsung, the Portable SSD T5 offers speeds of up to 540 MB/s. This makes it as fast as internal SATA SSDs. In our test we only achieved this value with CrystalDiskMark, but even slightly exceeded it. The Portable SSD T5 delivers what it promises. Nevertheless, you will not always reach this speed, as the other tests prove. The actual speed depends not only on the hardware, but also on the port, operating system, driver, access program used and file sizes transferred. In our test we did not activate the AES encryption in order not to slow down the speed. 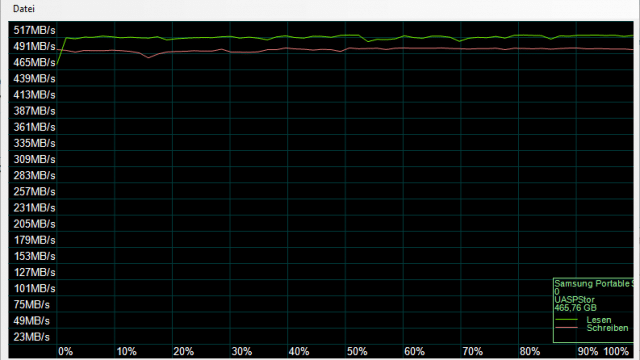 In terms of access times, the T5 is behind the T3 in our test, but this may also be due to the use of the USB controller, which is not located directly on the motherboard. The access time is therefore less meaningful here with AS SSD.

Samsung does everything right with the Portable SSD T5. It is a small but nice update to the Portable SSD T3. The almost perfect housing of the predecessor has been further improved and is now even higher quality. The high speed has been increased again and is now at the level of a SATA SSD. This is unique in the external, handy format.

The Portable SSD T5 is slightly more expensive than the competition, but also has more to offer. The price of the Samsung Portable SSD T3, which is already competitive, will be exciting, but will certainly drop again due to the new presentation.

But an external hard drive can still be great, for many people the high price will unfortunately continue to be a deterrent. The Samsung Portable SSD T5 is, however, the ultimate for professional use.

The Samsung Portable SSD T5 is a great update for the already great T3. It's even faster and higher quality. The perfect place for mobile backup of your data.

Kingston FURY Renegade HS: SSD with up to 7,300 MB/s reads