With its “Gletscherwasser”, manufacturer Alpenföhn launched a powerful compact water cooler last year, which also convinced in our test and won our much-coveted Platinum Award. Now the Allgäu-based experts for cooling solutions have announced another variant of their water cooling system. The Gletscherwasser will soon be available as a White Edition. However, the changes are only supposed to be of an optical nature.

Until now, you could buy the Gletscherwasser in only one color. Thus, Alpenföhn brought the compact water cooler on the market at release just under half a year ago only in black. Now, the second color variant goes on sale. The White Edition shines, according to its name, with pretty white accents.

With the Gletscherwasser, you can also choose between the sizes 240, 280 and 360 in the White Edition. Here there is a crucial difference to the release of the black edition six months ago. At that time, Alpenföhn only introduced a 240 and 360 version. The 280 version, on the other hand, has only been on store shelves for almost a month and a half. With the White Edition, you have the choice between three different radiators right from the start.

Quite obviously, however, Alpenföhn has only made optical changes. Accordingly, we can probably expect very good performance in the White Edition as well. According to the manufacturer, the White Edition features “high-speed” fans, which we could probably already find in the black version. However, since Alpenföhn does not make any technical changes, not only the advantages but also the disadvantages of the compact water cooling remain. Accordingly, the water cooling (especially the pump) once again comes with the popular logo plate, which can be replaced by the user.

In addition to the customizability of the pump, the Hydronaut thermal paste also comes with it. This comes from manufacturer Thermal Grizzly and promises the best possible performance. The only shortcoming of the pretty compact water cooling should probably be found in the area of durability. Especially the aluminum radiator, which has a thickness of 27 mm, is a concern for some users. Since there is no protection against corrosion in the cooling fluid, the copper processor cooler could corrode sooner or later. However, this should only be noticed after a few years.

Those who like the color change of the Gletscherwasser can strike now. However, the new White Edition costs a little more than the classic black model. The smallest model, Alpenföhn Gletscherwasser 240 comes with an MSRP of 175 euros. The two larger variants have an MSRP of 190 euros (280-mm radiator) and 195 euros (360-mm radiator), respectively. 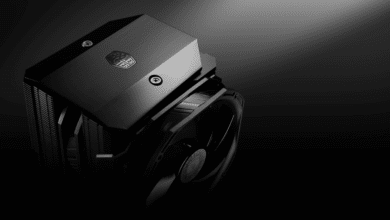 With its „Gletscherwasser“, manufacturer Alpenföhn launched a powerful compact water cooler last year, which also convinced in our test and won our much-coveted Platinum Award. Now the Allgäu-based experts for cooling solutions have announced another variant of their water cooling system. The Gletscherwasser will soon be available as a White Edition. However, the changes are … (Weiterlesen...)