OnePlus presents with the 7T a new smartphone of the price-related middle class, which has definitely higher ambitions. With a 90 Hz display, the latest Snapdragon chip and a triple camera, it can certainly be seen and measured against current top-class smartphones.

The display of the new OnePlus smartphone is probably the most surprising component. With a frame rate of 90 Hz, it skilfully outshines a number of competitors. The fact that it is special in some way is already noticeable at first glance: The 6.55-inch diagonal display occupies almost the entire front of the smartphone. Only a small notch and an extremely narrow edge remain free. In this respect, OnePlus pursues the same goal as Samsung, Apple and Co – and is just as successful.

But what’s really special – as already mentioned – is the refresh rate. It is especially helpful for fast games. But it is also noticeable in the normal use of the device – the higher the refresh rate, the smoother everything goes. Currently, such a high frequency is unusual for smartphone displays. However, it is to be expected that other major manufacturers will jump on the bandwagon. Google, for example, has already announced that it will also use a display with a very high refresh rate for its new pixel smartphone.

With the new 7T, a fingerprint scanner is embedded in the display, so that only the screen has to be touched at the relevant point in order to unlock the device.

In terms of performance, the 7T will in all likelihood also make a name for itself. It is powered by Qualcomm’s latest top model, the Snapdragon 855+. This powerful processor is supported by 8 GB of RAM. The Smartphone is thus probably also suitable for very demanding applications – so gamers can be happy. The built-in battery, however, holds 3,800 mAh. Equipped with a quick charge function, it should charge up to 70 percent within 30 minutes.

In addition, there is the triple camera already mentioned at the beginning. While the main camera offers 48 megapixels, the telephoto and ultra-wide angle cameras each have 16 megapixels. However, it should be noted that the main camera combines four pixels as standard. The main lens is also equipped with optical image stabilization and an f/1.6 aperture. The other two cameras are equipped with f/2.2 apertures.

Other notable features include double optical magnification, which is provided by the telephoto camera, 4K video recording from the main and telephoto cameras, and night mode.

The price of the smartphone should be between 560 and 570 euros. The date of the sales launch is not yet known.

Is a Samsung Galaxy A foldable coming for under 800 Euros? 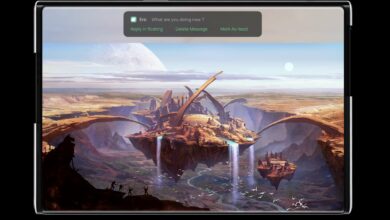