With the Specter 1, the manufacturer of the same name has an exciting S-pedelec in its portfolio, which is accelerated by a motor of up to 730 watts to 45 km/h and realizes a range of up to 110 kilometers thanks to two batteries.

The futuristic Specter 1 from the manufacturer in Ghent, Belgium, has it all. It is a fast and powerful S-pedelec that is likely to have a difficult time on the German market, but is likely to find favor in the rest of Europe.

The futuristic design of the bike is striking, which, just like the Urtopia e-bike, is made entirely of carbon and thus weighs only 19.8 kg. Offered is the frame in four colors: Blue, green, white and black.

In the standard version, the Specter 1 comes with a 700-watt mid-motor including 100 Nm of torque. However, there is also a performance version that can be applied to the handlebars and motorization separately.

When the performance model is selected, the handlebars are lowered by three centimeters. In addition, the automatic, continuously variable gearshift gives way here to a manual 7-speed gearshift with belt drive, while the motor delivers 112 Nm and 730 watts and catapults the S-Pedelect up to 45 km/h.

The low weight and mid-mounted motor, combined with the aerodynamics, allow the Specter 1 to mark the “most energy-efficient S-pedelec on the market,” according to the manufacturer.

The battery is removable and offers three riding modes. In the fast boost mode 40 km range are in. In Chill mode already 60 km and in Range mode even 110 km. The battery is installed in the down tube and can optionally be supplemented by a second 750-watt battery.

The strikingly large display on the handlebars becomes a digital cockpit. Among other things, it offers turn-by-turn navigation, lets you set the ride mode and offers many other functions. In the process, it communicates with 4G and Wi-Fi, as well as via Bluetooth.

In combination with the smartphone app, many additional functions are available to you. Here you can check the battery status and the remaining range. In addition, you can unlock or lock the Specter 1 from a distance and initiate route planning.


Open “Specter 1 “In search of”” directly

The Specter 1 S-pedelec is scheduled to begin shipping in September 2022. In addition to the comfort and performance options, you can order the bike in three sizes: For people under 175 cm, between 175 cm and 187 cm or for tall people over 187 cm tall.

Prices start at 8,000 euros plus VAT. In the top configuration with a different color, performance handlebars and engine, 8,780 euros plus VAT are called up. With all the additional extras, such as a second battery, additional charger and more, you end up at 9,900 euros plus VAT. You can find more information directly on the Website of the Specter 1. 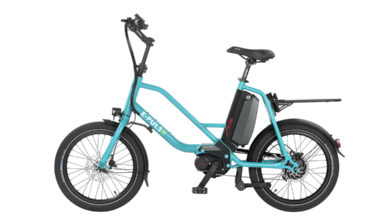 With the Specter 1, the manufacturer of the same name has an exciting S-pedelec in its portfolio, which is accelerated by a motor of up to 730 watts to 45 km/h and realizes a range of up to 110 kilometers thanks to two batteries. Specter 1 in detail The futuristic Specter 1 from the manufacturer … (Weiterlesen...)