At the beginning of 2018 Cooler Master presented a new housing series. The first offspring of this series is called MasterBox Q300L and is a spacious mini tower for µATX mainboards with a modular design. At the beginning of April 2019 Cooler Master introduced the bigger brother of the Q300L. This tower is called the MasterBox Q500L and even supports ATX mainboards without increasing the dimensions of the body. This was taken over from the Q300L and only the interior was slightly restructured. The Cooler MasterBox Q500L is only available in black and costs € 63.50 *.

Whether this price is justified for the Cooler MasterBox Q500L and how it generally works, we will find out for you in this review.

The Cooler MasterBox Q500L comes well and safely packed in a brown cardboard box with black lettering and is wrapped in normal Styrofoam. The Plexiglas side window was covered with a protective film on the outside to protect it from scratches. Unfortunately, the inside has no further foil. The supplied accessories were fastened in a transparent plastic bag inside the housing with a cable tie. This bag contains all important screws, ten black cable ties and an illustrated manual. Cooler Master also includes a screwdriver attachment for the spacers and eight plastic bolts.

Finally, the pre-installed housing fan and the pre-assembled spacers are included in the scope of delivery.

Externally, the Cooler MasterBox Q300L and the MasterBox Q500L can hardly be distinguished from each other. But let’s start this review with a look at the front. This is characterised by an attractive geometric pattern. However, this pattern is not on the steel body, but was printed on the magnetic dust filter. Behind the filter, the steel body, which has been drilled with numerous holes, can be reached directly. These allow a variable placement of possible fans or the PSU mount. To prevent the dust filter mat from slipping, Cooler Master has attached small rubber buffers to the corners.

A jump to the lid section shows an identical structure as in the front. The perforated steel is covered by an identical dust filter and held in place by the rubber elements, so there is not much more to say about the lid.

The left side is characterized by a large acrylic window. Four flat steel knurled screws are used for fastening. In addition, the manufacturer has equipped the left side of the housing with the I/O panel. There are two USB 3.0 ports, ports for microphone and headphones as well as two buttons for power and reset. The right side panel is completely made of steel and is also fastened with four knurled screws. However, these have a rubber edge. This should enable the housing to be set up horizontally if required.

When looking at the underside there was a first disappointment. This was also equipped with a dust filter, but in contrast to the other dust filters this is unfortunately not magnetic. Instead, many small rubber elements are used for locking. Compared to the other dust filters, the removal is much more complicated here. Unfortunately, the manufacturer has also saved some money on the feet. These are made of a slightly soft plastic and are not straight high. If fans are installed in the floor, the case should not be placed on a carpet.

At the back of the Q500L it will be somewhat unusual. You can see seven slots for expansion cards, the mounting location for the pre-installed case fan and the plug for the power cable. What is missing, however, is the space for the power supply. This is because the Q500L is installed differently than usual. See where that is in the next chapter. However, we would like to make a comment here about the fan opening of the rear fan. At first glance, this appears to be quite restrictive and particularly conceals the outer areas of the fan.

Anyone who has now paid close attention will have noticed that the front, lid and underside are completely identical. Together with the modular I/O panel and the symmetrical acrylic window, the housing can be mounted on the left or right of the desk.

Painting and workmanship and processing quality are OK but not really outstanding. Especially the three hole grids of the front, the lid and the underside can be pressed in quite easily. Also the steel side part could have some more stability. Due to the low weight of 3.8 kg, it is very easy to conclude that Cooler Master has saved material in the design. What a shame!

The interior of the Cooler MasterBox Q500L is very open designed and is a huge chamber. As usual, the mainboard and the expansion cards find space in this chamber. In order to be able to cable the components properly, the mainboard tray was also equipped with several cable management openings.

All this meets the standard and does not make the Q500L unique. But what makes this Midi-Tower special and the reason for the small total volume is the mounting position of the power supply. This is located to the right of the mainboard and is realized via a modular frame. The cables can be routed to the rear of the mainboard tray via a cable bushing.

Now let’s turn to the back. Behind the mainboard tray, the Q500L offers up to 30 mm space for cables. Together with the tabs for cable ties a proper cable management should be possible. In addition, all the support frames for data media are located on the back. One 3.5″ HDD or two 2.5″ SSDs are supported on each of the two steel frames. These are not an extraordinary number of possibilities, but they should be sufficient for a normal gaming PC.

The paint finish in the interior is fine. In addition, there are no sharp edges on which one could cut oneself. However, like at outer areas, the material thickness could be higher in places.

Now we come to system installation. As hardware we use a AMD Ryzen 5 1400* on a MSI B350 PC Mate* with 16GB Crucial Ballistix Sport LT grey DDR4-2666*. A GTX 1060 6GB from Gigabte AORUS* is responsible for the image output. The power supply does the non-modular be quiet! Pure Power with 400W. In order to enhance the cabling optically a little bit, single sleeved cable extensions from Phanteks.

Due to the unusual structure of the interior, there is one important point to consider before starting assembly. Before the mainboard can be installed, the power supply frame must first be removed, equipped with the PSU and reinstalled. Then the mainboard can also find its way into the case. If you don’t follow this order, you won’t get the power supply mounted anymore.

Otherwise there were no problems with the installation of the components. The spacers are pre-assembled, the PCI slot bezels are reusable and can easily be unscrewed. Especially impressive is the space behind the mainboard tray. Despite the cable extensions, the 30 mm space enables uncomplicated cabling and a clean end result. Also the cable openings are sufficiently dimensioned and sensibly placed.

Where you need to be a little careful is in the choice of hardware. Although the Q500L supports CPU coolers up to 160 mm in height and graphics cards up to 360 mm in length, the latter only applies if the power supply does not exceed 160 mm in length. The Pure Power 10 used here is 150 mm long and together with the 280 mm long GTX 1060 has caused no problems.

The assembly of the hard disks requires a screwdriver, but is otherwise very simple. Both retaining plates are connected to the body with a knurled screw. To attach the HDDs or SSDs, these disks are removed and the data carriers are attached to them again with normal screws.

Cooler Master equips the Q500L with a fan ex works. It has a black connection cable and rotates at a maximum speed of 1200 rpm. Although it carries some air, it is also clearly audible. The fan opening already mentioned in chapter 3 seems to prove to be a really faulty construction. Although the fan rotates at a full 1200 rpm, relatively little air is moved when installed. We were also able to determine this during the stress test.

For this purpose, Prime95 and Furmark were run for 15 minutes at a room temperature of 18.5 °C and the CPUID HWMonitor was used to determine the temperature of the processor and graphics card. In addition to the standard configuration, a test with two other fans (Fractal Design Venturi HF-12) was also carried out. One fan was installed in the rear, the other in the front under the power supply.

After completion of the measurements, it is noticeable that the CPU temperature is dropping noticeably due to a fan in the front. But both fans had to run at full speed. This in turn led to a higher background noise. If you reduce the number of revolutions, the temperatures rise again a little. All in all, it seems as if the perforations in the front and in the lid are too restrictive.

So can we recommend the Coolermaster MasterBox Q500L after this review? Unfortunately, there is no clear answer to this question. The MasterBox Q500L is a compact yet spacious midi tower that supports ATX mainboards and other high-end components despite its slim footprint. Also the cable management is not limited by the small size. What we didn’t like so much are the old side windows made of simple acrylic and the impractical dust filter on the underside. Also the material quality is in places rather comparable with a 30 Euro case. Last but not least there is the rather moderate airflow. If you want to have acceptable temperatures, you have to invest some time in the right fan arrangement.

If you are looking for a case that combines ATX support with a narrow footprint, the Cooler MasterBox Q500L could be a possible candidate. Owners of high-end hardware, however, should prefer a case with better airflow.

ATX case with a narrow footprint but a bad airflow. 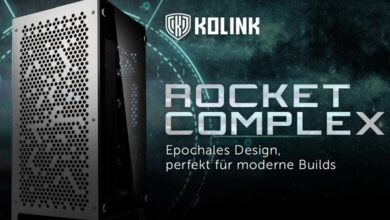