In addition to many enclosures in the budget segment, the manufacturer Kolink also released some enclosures in the mid-price segment some time ago. One of these cases is called Horizon RGB and is currently the most expensive case from the manufacturer in Midi Tower format. The Horizon is only available in black and costs € 89.90 *. Kolink advertises the Midi Tower with a luxurious equipment, various mounting possibilities for different hardware and an elegant design.

Whether the Kolink Horizon can do justice to this description and how it performs in general, we will find out for you in this review.

Packaging and Scope of Delivery

The Kolink Horizon comes well and safely packed in a brown and printed cardboard box. For additional protection, there is a protective film on the side panel. The glass pane in the front, on the other hand, has no additional protection. The accessories were stowed in a transparent bag and fastened inside the hard drive cage. It contains all important screws, five cable ties, a mainboard speaker and a remote control for the RGB control including a short manual.


The scope of delivery also includes the four pre-installed RGB fans, an RGB control board, a magnetic dust filter for the lid and the pre-installed spacers for the mainboard.

Optically the Kolink Horizon looks very stylish and noble. One reason for this is the glass element in the front, which covers almost the entire front. In order for the three pre-installed RGB fans in the front to still get air, the manufacturer has fitted small ventilation openings on the sides and additionally equipped these with mesh dust filters. Whether these openings are large enough for all three front fans, however, we will find out in a later section.

Finally, you will find the front-facing I/O panel in the front. There are two USB 3.0 ports, one USB 2.0 port, one connection each for headphones and microphone, as well as three buttons for power, reset and RGB control. Plastic with a brushed aluminum finish was also used around the I/O panel. Since the Horizon is definitely aimed at buyers who attach great importance to optics, it is in our eyes an absolute no-go that the cables are partly colorful and not completely black.

The lid section of the Horizon is quite unspectacular. The largest part of the lid is characterized by a fan opening for two fans with a frame width of 120 mm. To protect against dust and to improve the optics, the scope of delivery also includes a magnetic dust filter made of mesh that covers the fan openings.

If one takes a look at the side parts, at least the glass trend continues on the left side of the horizon. Kolink has also used an element made of tempered glass here. This washer has a thickness of 4 mm and is held in place with four flat knurled screws. The right side panel, on the other hand, is completely made of steel and has a bulge to facilitate cable management.

The floor and rear, on the other hand, do not offer any unusual features. The Horizon stands on solid plastic feet and has a mesh dust filter for the power supply, but its removal is quite complicated. The power supply unit is mounted accordingly at the bottom and above it there are the seven PCI slot bezels which are screwed inside the housing and are reusable. To round off the RGB effects, the Horizon also has a fourth RGB fan in the rear.

The external workmanship is good and the stability of the side parts or the body correspond to the price class aimed at. In addition, there are no sharp edges and we did not find any faults in the paintwork.

The interior of the Kolink Horizon is characterized by a lot of space and an open interior design. In the lower area, a cover has been installed, which divides the Midi Tower into two areas and thus covers the power supply, the HDD cage and the cabling. In addition, the cover offers a mounting option for an SSD and a cut-out for mounting thicker radiators in the front. The mainboard and the expansion cards are mounted above the front panel. In order to facilitate cabling, Kolink has also made sufficiently dimensioned openings for cable management around the mounting surface.

A look at the back of the mainboard carriage reveals further parts of the cable management system and the pre-installed control board for the RGB fans. As mentioned before, the power supply and the hard disk cage are covered by a screen to make the system look tidier. The hard disk cage offers the possibility to accommodate two 2.5″ or 3.5″ HDDs. Two simple plastic frames without decoupling serve as fastening. In addition, the rear side of the mainboard tray offers the possibility to mount two additional SSDs there.

The workmanship inside is better than with other Kolink products. The frame looks stable even without side parts and the paint is even. In addition, all edges are folded and therefore offer no possibility of injury.

Now we come to system installation. As hardware I use a Intel Xeon 1230v3 on a Gigabyte H87M-D3H with 16GB RAM. The Xeon is represented by a LC-Power Cosmo Cool LC-CC-120 cooled. An HD 7850 2GB from Asus is responsible for the image output. The power supply does the non-modular be quiet! pure power with 400W. In order to improve the wiring optically a little bit, single sleeved cable extensions from Phanteks* were used.

The installation of all components was completed quickly due to the generously designed interior and can also be carried out easily with large hands. When installing hardware, the buyer almost doesn’t have to worry about whether an appropriate part fits or not. However, this does not apply to CPU coolers. With a maximum possible height of 155 mm, the selection is limited to a whole piece. High-end coolers such as the Dark Rock Pro 4 therefore do not fit into the Horizon.

The cabling was also a little tighter. The power supply cover and the well placed openings let the system look neat from the front, but at the back it was a bit tricky to mount the side part again. Stacking the cables is not possible and you should consider exactly where which cables can be routed. Fortunately, the side part has a bulge, otherwise it would probably have been impossible to mount the sidepanel again.

For tool-free mounting of 3,5″-HDDs in the hard disk cage, the two supplied hard disk frames made of simple plastic are used. Considering the price of the Horizon, however, the material quality is marginal and the buyer also has to completely dispense with decoupling. Of course, this is also reflected during operation in certain vibrations, which are transmitted to the entire housing. For SSDs, there are a total of three mounting options. An SSD can be mounted or presented above the power supply cover using the supplied frame. Two further 2.5″ devices find a place on the back of the mainboard tray and are screwed directly to the body.

The four pre-installed case fans are directly supplied with power via the control board. Since there is no PWM connection on the board, the fans rotate permanently at a speed (estimated between 1200 and 1500 rpm) and are therefore clearly audible. Silent fans would have to replace the board and fan completely.

The following graphic shows the temperatures for CPU and GPU after 15 minutes.

As you can clearly see, the temperatures without the installed front panel are about 10 °C and thus significantly lower. This strongly indicates that the small side ventilation openings are not sufficient to supply all the fans with fresh air. So Kolink definitely put optics before performance here and that takes its revenge on the temperatures. What a shame!

Lighting Options in the Kolink Horizon

The Kolink Horizon comes ex works with four pre-installed RGB fans and a corresponding control board, which can be operated via a button on the I/O panel or with the remote control supplied. A connection with an RGB-capable motherboard cannot be established and therefore the LEDs are not controllable by an installed software. Nevertheless, many different modes can be set, e.g. monochrome, pulsating, propeller or rainbow. Another negative point is the absence of standardized connections. So the board and accordingly the fans don’t have any common connectors, but a 6-pin plug, which you won’t find in this form at any other manufacturer. Unfortunately there are currently no further accessories or additional fans available from the manufacturer.

Finally we would like to present you some color impressions of the activated lighting.

Conclusion on the Kolink Horizon Review

Did Kolink hit the nail on the head with the Horizon RGB? The Midi-Tower is characterized by the good space, the chic look, which is dominated by a lot of glass, and the possibility to install a water cooling with a thick radiator in the front. The four pre-installed RGB fans also look like a positive feature at first glance. But if you take a closer look at the fans and the circuit board, you’ll quickly get disillusioned. The use of proprietary connections and the non-existent controllability of the speed will quickly lead to annoyance for silent fans. Also the fact that the RGB effects cannot be controlled via the mainboard will not be very positive for most interested people.

A much more important point in our eyes is the fact that Kolink only paid attention to the optics and not to the ventilation in this case. So the fan openings in the front are much too small and the fans are much too close behind the window. In the end, this leads to significantly higher temperatures and theoretically makes the fans in the front unnecessary.

Overall, the price with € 89.90 * seems a bit too high when you consider that the competition (such as Sharkoon TG5 RGB) has a better airflow for the same money and above all digitally addressable RGB fans.

Spacious midi tower lots of glass and RGB but a very bad airflow. 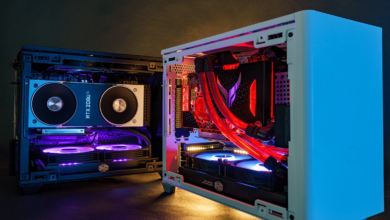