At Computex 2018 Silverstone presented many new Mini-ITX and Micro-ATX packages. Among the new releases is the Silverstone PS15. This is a small mini tower with 25 litres, a spacious interior and a good airflow. The PS15 should actually be available from 12.12.2018 on the market for an RRP of 55,80 €. Currently it is only listed at a few dealers and costs € 83.74 *.

Silverstone advertises on its own homepage with a compact design, an outstanding cooling potential and an elegant appearance . In the following test we will take a closer look at the model variant SST-PS15B-G in black and a side window made of glass.

The Silverstone PS15 comes well and safely packed in a brown and printed cardboard box. For additional protection, there are two protective foils on the glass side panel. The accessories were stored in a transparent bag and fastened inside the housing with a cable tie. It contains all important screws, five black cable ties and warranty information. A manual is not included, but can be downloaded from the Silverstone homepage.

The outward appearance of the Silverstone PS15 can be described as rather unobtrusive and simple. In addition, the tower for a mini tower has very compact dimensions. With a total volume of only 25 litres, the Silverstone case is definitely one of the most compact mini towers.

The front consists mainly of a mesh grid, which is surrounded by a plastic frame. At the lower part of the front the manufacturer has attached the Silverstone logo, which glows blue when switched on. The lid also has a large opening for fan mounting and a magnetic dust filter to protect against dust. The I/O panel mounted in the front panel is also located here. There are two USB 3.0 ports, connectors for microphone or headphones and a power button.

The rear and bottom of the PS15 do not contain any special features. The power supply unit is mounted at the bottom and protected from dust by a mesh filter. Four slots for expansion cards and the pre-installed 120 mm fan can be seen above it. Finally, four feet made of normal plastic ensure a secure stand.

Silvestone follows the current trend with the PS15 and has a hardened glass side panel on the left. This is fastened with four flat knurled screws. The right side panel, on the other hand, is made of steel and completely closed.

If one removes the two side parts, the compact, but for a mini tower very spacious interior comes to the fore. In order to make the interior as small as possible, Silverstone has even dispensed with the now very popular power supply cover. Around the mainboard there are four well-dimensioned openings for cables. Beside the power supply there is a flat hard disk cage for a 3.5″ and a 2.5″ hard disk on the front. Otherwise, only two 2.5″ HDDs can be installed behind the mainboard tray. It also has a large cut-out for subsequent CPU cooler installation and various mounting points for cable ties.

With a price of € 83.74 the PS15 moves between the beginner and the middle class segment. Nevertheless, the workmanship is predominantly good. The paint is applied flawlessly and there are no sharp corners or edges. Only after the removal of the breakable slot bezels there is one or the other sharp spot. On the other hand, the material thickness used could have been better in some places. Especially the continuous mainboard sled could have taken a bit more strength in the middle. The feel of the power button can be described as very good.

The Silverstone PS15 is a mini tower with a relatively small total volume of approx. 26 litres and four PCI slots. This makes the tower even smaller than some Mini-ITX housings. It can accommodate motherboards in Mini-ITX and Micro-ATX formats and offers space for graphics accelerators up to 314 mm long. However, the small volume also demands a tribute, so power supplies must not be longer than 150 mm and CPU coolers must not exceed a maximum height of 154 mm.

Silverstone has promoted the good airflow as the main feature of the PS15. With the five mounting positions for fans and the large measuring openings, this should also be possible without any problems. The manufacturer uses a black fan with a frame width of 120 mm in the rear as standard. It has a 3pin connector and rotates at a maximum of 1200 revolutions per minute.

If the installation of a more powerful CPU is planned, it is also possible to install an AiO water cooling system in this mini tower. However, this installation can only take place in the front and the water cooling may have a maximum of one 240 mm radiator. This also reduces the space for a graphics card.

Silvesrtone completely dispenses with interior lighting or eye-catching RGB elements. Only the glossy logo on the front can be highlighted by a blue illumination. All you need to do is connect the existing 4-pin Molex cable to the power supply unit.

Now we come to system installation. As hardware I use a Intel Xeon 1230v3 on a Gigabyte H87M-D3H with 16GB RAM. The Xeon is cooled by a Prolimatech Megahalems Black with a Fractal Design HF-12* fan. An HD 7850 2GB from Asus is responsible for the image output. The power supply does the non-modular be quiet! pure power with 400W.

The installation of the mainboard was quickly done due to the correctly pre-installed spacers. Due to the compact interior, the installation of the components has to be a bit more structured than with a normal midi tower. The wiring of the components also required structured work and a little more time. Due to the space of only 14 mm behind the mainboard tray, the space for cables is very limited and stacking the cables is virtually impossible. If you don’t need the hard disk cage, it’s a great way to store superfluous cables. Despite the limited space available in the Mini Tower, however, a neat system can be set up.

Since the Prolimatech Megahlem I used with a height of 158.7 mm exceeds the maximum permissible height of 154 mm, there were slight problems with the assembly of the side panel. This could be fastened with all four screws, but had contact to a heatpipe of the tower cooler. Depending on the socket, it might well be possible that there is a little more room for CPU coolers than 154 mm.

The assembly of the hard disks is well thought out and is very simple. All 2.5″ data carriers are equipped below with special rubber rings and screws. Afterwards, the hard disks can simply be pushed to the designated places. The only mounting option for a 3.5″ hard disk is a simple plastic frame. However, the data carrier is not decoupled.

Finally, we come to the temperature measurements. For this I ran Prime95 and Furmark for 15 minutes at a room temperature of 18°C and then determined the temperature of the processor and graphics card with the CPUID HWMonitor. All fan profiles were set to “Normal” via the BIOS. If only the pre-installed 120 mm fan is installed, 68°C were reached for the CPU and 72°C for the GPU. After installing two Fractal Design Venturi HF12 fans, both temperatures could be reduced by three degrees each to 65°C for the processor and 69°C for the graphics card. The pre-installed fan has a maximum speed of 1200 rpm and can therefore be heard out of the system. The volume is better controlled down, but at speeds of 800 rpm and above you can hear slight background noises.

Conclusion of the Silverstone PS15 Review

So what can be said about the Silverstone PS15 in conclusion? The Mini-Tower has a very compact design, is well processed and offers a high potential for airflow due to the mesh elements. By dispensing with RGB effects or unusual shapes, it appears timeless, but offers good modding potential due to the glass side window. The case with a total volume of only 25 litres and the features of the PS15 are very sparsely sown. So you might think that Silverstone made the perfect case for buyers who want a narrow footprint but don’t want to pay the extra price for Mini-ITX hardware. Unfortunately, this is only partially true.

Negative points such as the thickness of the material in some areas, the dust filters, some of which are difficult to remove, or the breakable slot bezels already cause some frowning at an RRP of 55.80 €. However, considering that the actual road price is likely to be below the EIA, the Silverstone is currently unrivalled in terms of features. Only the Raijintek Styx can serve as a possible competitor. The Styx, however, is more expensive, does not have a glass side window and the buyer is more limited in the graphics card / power supply combination. The Raijintek case is made entirely of aluminium and supports larger CPU coolers.

A compact mini tower with good airflow and plenty of space for hardware. 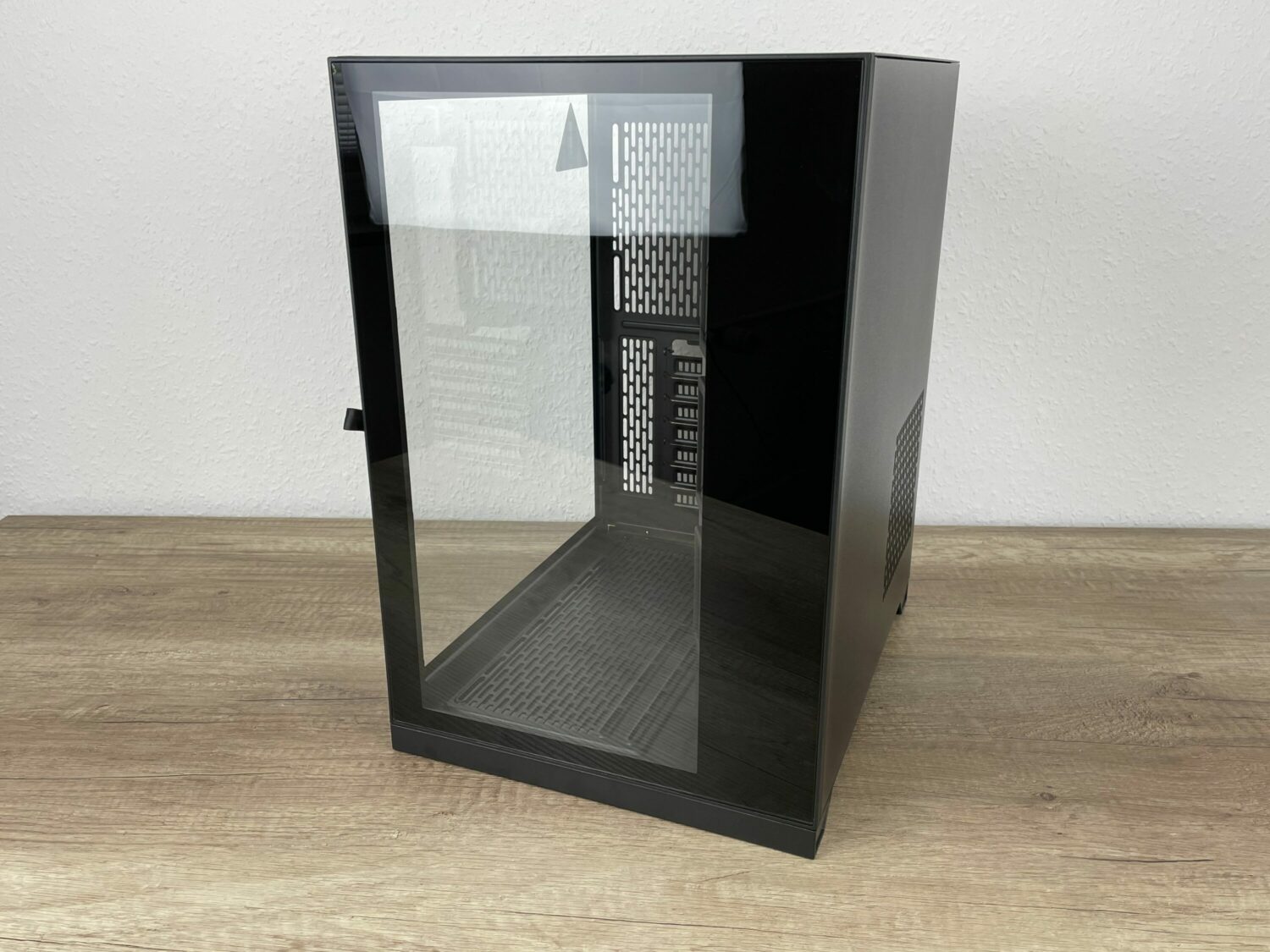