Depending on the brand or company that presents us with a product for testing, we inevitably have different expectations of the result. Of course, these are particularly high when it comes to audio gurus like EPOS. The brand, which belongs to the Danish Demant Group, collaborates with Sennheiser and is completely dedicated to first-class sound for gamers. This has often resulted in excellent products.

However, EPOS has dispensed with Sennheiser’s expertise for the new True Wireless In-Ears GTW 270 Hybrid and developed them in-house. It is also possible that Sennheiser’s exit from the private sector may be the cause. Nevertheless, these headphones for gamers do not have to hide at all. They are suitable for every kind of gamer – unless you exclusively play on an Xbox.

We took a look at the EPOS GTW 270 Hybrid and tested them for her(t)z and sound.

As epic as the company name is, the packaging of the EPOS GTW 270 Hybrid also presents itself epically. Completely in black with a picture of the headphones, it can be opened. The GTW 270, a charging case, a USB dongle plus extension cable, silicone attachments, and a USB Type-C charging cable are revealed.

For several years now, a certain form of wireless in-ears has asserted itself and is particularly well received by consumers. EPOS doesn’t shirk this either, and has made its GTW 270 hybrid headphones sleek, small, and with a rounded rectangular surface that features the EPOS logo. From an ergonomic point of view, the in-ears have definitely taken our fancy.

Above all, the plain gray surface on which the logo has been applied is a visual highlight. However, there is no touch surface underneath, which surprised us a bit. The GTW 270 Hybrids are operated via a small push button on the left headphone. This can be used to answer calls as well as command the music to play and stop. Not particularly high-end, but this can be overlooked as long as the rest is coherent.

The respective somewhat bulbous cases are made entirely of plastic, which makes them light. Furthermore, the included silicone attachments provide the necessary grip and seal optimally. However, the right size of the attachments for the corresponding ear is important, otherwise there is sound loss – a waste considering the audio quality. EPOS has already succeeded with the design, material and ergonomic shape of the headphones. But what about the charging case?

This is made of anodized aluminum and is handy enough to disappear in your handbag or jacket pocket. You should definitely take it with you if you want to use the headphones on the go for more than five hours. But more about that later in the “Battery” section. In any case, the case makes a noble impression and rounds off the package of the EPOS headphones perfectly.

On the other hand, we don’t need to say much about the dongle’s appearance. It looks just like a dongle looks: Rectangular with USB Type-C connector and connection button. Just like all other components, it is black.

To sum up: The EPOS GTW 270 Hybrid fit great (with the right silicone attachments), all the parts look classy, and resistant to water and sweat to boot. Only the separate control button on the left in-ear has surprised us a bit, since it is still something 2010er.

Sound: Best sound for any kind of game

Old-fashioned button or not, now it’s about the sound quality, which is far more important. The headphones can be connected via USB dongle or directly via Bluetooth 5.1 if it is a smartphone. This results in the “hybrid” in the name. The connection is garnished with the audio codec aptX in both cases, which promises low latency and can also confirm it according to our tests. But of course, the device has to support aptX, which is not the case for all devices.

It should almost be expected that the audio codec is installed, since the EPOS in-ears are labeled as gaming headphones. If you want to impress FPS gamers, you have to be able to transmit latency-free sound – and the GTW 270 Hybrid can do that. But not only with this one codec, but also with aptX LL, which lowers the latency from 160 ms to a brisk 60. Hello Call of Duty and Co!

As before every review, we also looked at the tests of other portals and often had to read that the soundscape of the EPOS GTW 270 Hybrid is not perfect for listening to music. After our own test, we cannot fully confirm this, and secondly, we should not forget that the headphones were designed for gaming. And in this area, the headphones do an optimal job in the high, mid and low tones. Especially the bass-heavy tones stand out.

Background noise is filtered out by a microphone and thanks to surround sound you can immediately hear from which direction the shots or footsteps are coming. In short, in a crowded train compartment on a five-hour ride to Munich, everyone can immerse themselves in their favorite game without being disturbed from the outside. We shouldn’t be misunderstood: The EPOS in-ears cannot keep up with competent gaming headsets from SteelSeries or Corsair, for example, but that is not the claim. For gaming headphones on the go, the GTW 270 Hybrid are first class in terms of sound.

A small tip: You should definitely test all silicone tips. If a pair does not fit optimally, they do not seal and valuable sounds are lost. Often, it is also a fact that both ears are different and also require two different sizes of attachments. Only if the headphones fit perfectly on both sides, you benefit from the sound experience.

Microphone: Built in what is necessary

In addition to the microphone, which filters background noise, there is another one built in for voice recording. This can be used for phone calls or the voice assistant, but less so when gaming. This is because the microphone can only be used when the Bluetooth connection is used. If the connection is established via the low-latency adapter, only the sound output is supported in order to provide the maximum bandwidth and thus a low latency for this.

The frequency range between 100 and 7,500 Hz is chosen a bit more sparingly than we’re used to with True Wireless in-ears, but it’s perfectly sufficient for the aforementioned tasks. Soundful voice transmissions are not to be expected here.

Battery: Sufficient, but with room for improvement

The art of gaming in-ears for on-the-go is to pack a good sound and a long-lasting battery into the smallest space. EPOS has succeeded in the former, but also in the latter?

Yes, is the simple answer. The headphones can be used for five hours on one charge, which doesn’t even take long at one and a half hours. Another 15 hours are added by charging them in the aluminum case in the meantime. So if you fully charge these at home before traveling, you’ll get almost a whole day’s worth of use out of the GTW 270 Hybrid. A quick charge function is also integrated, allowing the battery to be charged in 15 minutes for an hour of runtime.

However, you should keep in mind that the battery life is reduced when the volume is turned up. In our eyes, EPOS has packed enough lithium to pick up a satisfactory grade. Other wireless in-ears have already proven that more is possible.

At this point, we vacillate in our assessment between.

We’ll just leave that up to the buyer. Enthusiastic we are all the time from the EPOS GTW 270 Hybrid, as we have noticed in one or the other place.

Software: To push the sound experience to the extreme

To get the most out of the in-ears’ sound, you can get the EPOS Gaming Suite software on your Windows PC. Here, updates can be applied to the GTW 270 Hybrid and various profiles can be saved. With the help of a simple equalizer, the sound worlds can be adjusted accordingly and switched between 2.0 and 7.1.

It’s not a professional software and it doesn’t change the world, but to push the sound quality to the top, it’s definitely enough. It also allows you to set the language of the status messages.

Unfortunately, there was a small complication here. Namely, the software shows a firmware update, although the latest version is already installed. According to EPOS, however, a new version should be released soon that will fix this.

In the end, we are satisfied with the performance of the new EPOS in-ears. Audio quality, design and workmanship fit the bill. The only thing that needs to catch up is the battery, which could run out too quickly for hardcore gamers. However, the runtime is usual for in-ears.

However, considering that the EPOS GTW 270 Hybrid cover several devices thanks to the USB dongle, the manufacturer has done a great job. Besides the PC and smartphone, the True Wireless in-ears can also be connected to the Nintendo Switch and both PlayStations 4 and 5. A broad portfolio that will definitely appeal to the demanding gamer.

200 Euros is a hefty price and a bit too much in relation to the offered performance, we think. However, those who can do without the dongle because they only play on the cell phone anyway will save 30 Euros. Nevertheless, there are cheaper earbuds, for example, with the Sennheiser CX 400BT, which can keep up with the GTW 270 Hybrid thanks to aptX, detailed soundscape and the same battery life. But the “gaming” label makes prices go up quickly – nothing new on that front.

Gaming in-ears for on the go with a rich sound, satisfying battery and chic design; however, there is still room for improvement in terms of price-performance. Thanks to aptX, the EPOS GTW 270 Hybrid can be enjoyed with very low latency and can be connected to almost any device via USB dongle and Bluetooth 5.1. 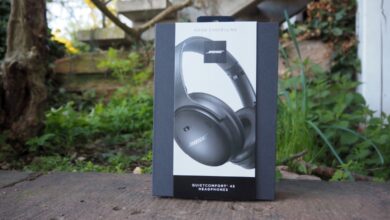 OneOdio A30 ANC in test: A lot of headphones for little money?

Depending on the brand or company that presents us with a product for testing, we inevitably have different expectations of the result. Of course, these are particularly high when it comes to audio gurus like EPOS. The brand, which belongs to the Danish Demant Group, collaborates with Sennheiser and is completely dedicated to first-class sound … (Weiterlesen...)