Logitech has been successful in the webcam market for years, the most famous model is probably the C920. With the StreamCam, the company is now particularly targeting streamers. For example, the Logitech StreamCam offers face tracking and a 9:16 mode for Instagram or Facebook stories. Images can be recorded in FullHD at 60 frames per second. To find out if streamers can be happy with the Logitech StreamCam, we took a closer look at it.

No matter if black or grey, I would say the Logitech StreamCam is a very nice camera. I like the design, even if it is a matter of taste.

Although Logitech has years of experience with webcams, the company has taken a step with the StreamCam that I can’t understand. Most other webcams simply have a tripod thread integrated into the monitor mount, and Logitech has done the same. However, this is not the case with the StreamCam. Instead, two mounts are included in the scope of delivery, which can or must be replaced as needed. So there is a monitor holder and a tripod holder. Even though the change is easy and quick, it is still one that might be superfluous. And the second holder will certainly disappear in the depths of their rummage boxes for many people.

The brackets in detail

The situation is different with the monitor holder. This is similar in construction to the mount of other webcams. So the webcam can be placed easily on the upper edge of the monitor. It is also tiltable and rotatable, so that you can easily find the right viewing angle.

In both mounts the StreamCam can be mounted horizontally or vertically. What for? We will come to that in a moment.

The Logitech StreamCam is connected via USB-C. It is of course commendable that Logitech is focusing on this “new” standard, which is slowly but surely becoming established. Unfortunately, however, it is still incomplete. Many PCs don’t have a USB-C port yet, and if they do, it’s usually only one. USB-A ports are even more common. Therefore I think it is a great pity that Logitech does not include an adapter for USB-A.

By the way, if the PC is placed under the desk, the 1.5 meter long cable can be quite scarce.

Let’s start with the special features the StreamCam offers and those that streamers might miss.

As a special feature, Logitech has considered that the webcam automatically rotates the image depending on the orientation. This should enable videos for Instagram and Facebook stories. The problem with this? The webcam is only compatible with Windows and Mac and you cannot stream to Instagram from your PC. Marketing should probably have been better informed. Unfortunately, the function doesn’t make much sense in other respects either, because almost every recording and streaming program allows you to shoot the recording. The sensor built into the StreamCam is therefore superfluous and only drives up the price.

But it does not stop there. Logitech has also integrated a microphone. As with all webcams, the quality is poor and absolutely insufficient for professional streamers. So it’s just another cost driver without value for streamers. Instead Logitech should have integrated a LED ring, like Razer did with the Kiyo tat.

What is the recording quality of the Logitech StreamCam?

The microphone records intelligible speech, but is not suitable for streamers in terms of quality. An inexpensive floor-standing microphone or even a headset microphone can provide much better results.

More important than the sound, however, is the image. The Logitech StreamCam enables FullHD recordings (1,920 x 1,080 pixels) with up to 60 frames per second. This is better than most other webcams, but worse than the Logitech Brio Ultra HD Pro webcam. But since streamers usually use only a small area of their screen to display their face anyway and the rest is covered by the game, a higher resolution is rarely relevant for streamers. More important is how the picture looks like.

And here the streamcam does a good job. With a 78 degree lens, everything important fits into the picture. The automatic exposure correction works reliably and quickly. The image is sometimes a little too rosy and you can also see a slight image noise. Nevertheless everything is clearly visible and on a higher level than many other webcams. For streamers interesting bokeh shots are unfortunately not possible, everything is always sharp. But take a look at the test shot yourself:

Although the Logitech StreamCam works via Plug&Play, there is an additional software available with Logitech Capture.

But one important function for streamers is missing: streaming. With Logitech Capture, only local storage of recordings is possible. OBS, Streamlabs OBS or Xsplit are therefore much better and also more extensive alternatives. There it is also possible to integrate the edited image from Logitech Capture, but Logitech Capture consumes a lot of processing power, so it might not be worth it.

Conclusion on the Logitech StreamCam

Do not misunderstand me. The Logitech StreamCam is a good webcam. With its FullHD resolution of 60 frames per second, it will be more than adequate for video conferencing and streaming. The image quality is also good. However, it comes with some questionable features that do not fit the streamer target group. The built-in microphone, the alignment sensor and the electrical image stabilization could have been saved by Logitech. Instead, a bokeh mode, for example, would have been interesting for streamers. 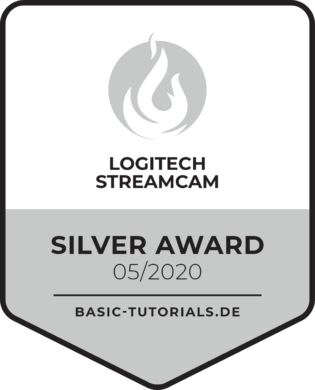 The Logitech StreamCam is a good webcam, but its features do not fit the target group.