After Samsung has already released the Portable SSD T7 Touch, which we have already here tested, a version without the fingerprint sensor was also launched. We have checked for you what performance data the SSD brings with it and if there are differences to the previous test of the SSD T7 Touch.

In addition to the SSD, which is available in blue, grey and red, two cables and a short entry aid are included in the scope of delivery. More is also not needed to use the SSD directly and also as one would like to have it oneself. The two cables are a USB-C-to-USB-C cable to get the full performance and a USB-C-to-USB-A cable to use the SSD everywhere, because these two connectors are available on almost all current devices.

Let’s start by looking at the data of the Samsung Portable SSD T7 as it looks on paper.

Here we can already see that the only difference to the model with fingerprint sensor is the sensor itself. Speeds and size are identical and only the selectable colors give a second variation possibility. However, the technical data itself is still amazing, especially in terms of size. The T7 has the size of a credit card, if you leave out the thickness of 8 mm – and a capacity of up to 2 Terabyte. In 1998, the maximum storage capacity was still 50 gigabytes in combination with 3.5-inch drives.

Like its predecessors and the T7 Touch, Samsung has opted for a very simple design. There are no technical design features, just two lettering. On the top side, the lettering “SAMSUNG” is centered, while on the bottom side the product name is placed somewhat more discreetly in the right-hand corner. The USB-C port is also centered on the front, so that the T7 again shows symmetrical features. As already mentioned, you have the option of choosing the right color from Indigo Blue, Titan Grey and Metallic Red. This way, the SSD can at least be adapted to your own taste. 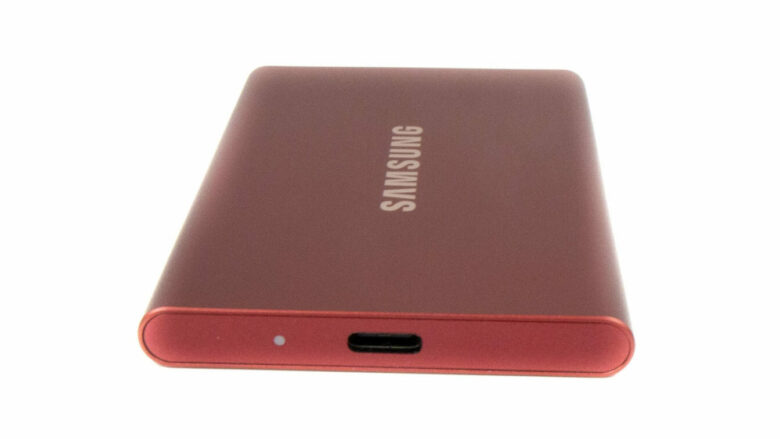 Especially with a portable SSD, workmanship is relatively important because the memory and thus the data must remain protected. So Samsung has also built the aluminum case to fit and at the same time ensured that at least falls from a height of up to 2 meters do not cause any data loss. So even clumsy people do not have to worry too much.

The non-existent fingerprint sensor of the T7 version, however, does not make a significant difference in terms of data security per se. With the help of the appropriate software it is possible to protect your data with a password, as the picture series shows you very simply. A minimum of security is required for the password, therefore at least 4 characters must be used. Afterwards the data on the hard disk is secured with 256 bit AES encryption. Nobody can access your data that fast. Furthermore, the software offers the possibility to update the firmware of the Samsung SSD T7, so that no risks arise from possible security gaps.

But now we want to look less at the past and theoretical, technical data, but rather put the SSD to the test. 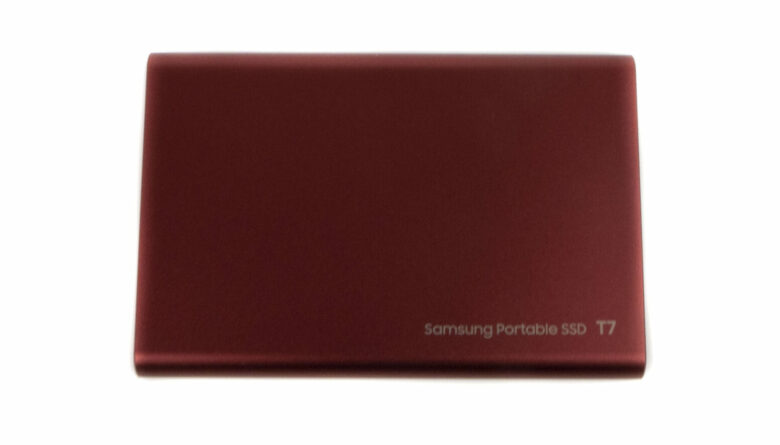 Before we come to the tests, we would like to point out that the USB port used has a significant effect on the speed. If no USB 3.2 Gen2 is available, the connection is not sufficient and the hard disk is slowed down. The mainboard we use has a Lightning USB-3.1-Gen 2 port, which could theoretically transfer data rates of up to 16 GB/s. Accordingly, we are eagerly awaiting the results that the benchmark will give us. We use the AS SSD Benchmark in version 2.0.7316.34247.

First, let’s take a look at the data rates when the SSD is connected via a conventional USB 3.1 port. Already here we reach data rates that almost come close to SATA SSDs. But with a reading speed of 426.74 MB/s you are still far away from the targeted 1000 MB/s, so we switch to USB 3.1 Gen2 Type A.

Here the better connected connection becomes noticeable and we get pretty close to 1000 MB/s. However, with a sequential read speed of 944 MB/s and a write speed of 883 MB/s, we are still a bit behind the factory specifications.

Last but not least, let’s take a look at the results when the Samsung SSD T7 is connected via USB 3.1 Gen2 type C. Although there are hardly any sequential differences, the performance in the 4K-64Thrd increases significantly. Instead of 278 MB/s, 413 MB/S are read and 305 MB/s are written. In addition, the access time is also reduced and finally we get a score of 537 points in reading, 450 points in writing and combined to 1266 points in the AS SSD benchmark.

We also have another test run in the baggage, namely we have tested how the behavior looks like in long load. Especially with such compressed technology, the system must be able to transport the heat generated well to protect against overheating. Thanks to “Encapsulated Phase Change Materials” as well as “Dynamic Thermal Guard Technology”, the Samsung Portable SSD T7 stayed really cool and we didn’t notice any loss of performance during longer use.

In summary, we can say that the Samsung Portable SSD T7 is doing really well. It doesn’t quite reach the stated data rates in our test, but the test system wasn’t 100% suitable for squeezing the maximum performance out of the T7. Nevertheless, the performance is also convincing in terms of temperature handling.

Especially in comparison to the T7 Touch, the only disadvantage is that your own data can only be protected with a password. This is more a matter of personal preference and so we can confidently recommend both SSDs, even though they may be a bit more expensive for performance.

Secure, portable and fast - If you need a small SSD with data encryption to go, you've come to the right place.

Samsung: Galaxy A51 and A71 introduced