Just last year Samsung limited its Portable SSD T5 to USB 3.1. At the IFA Samsung will show the Portable SSD X5, which no longer has this limitation. The external NVMe SSD connects via Thunderbolt 3 for speeds up to 2,800 megabytes per second. With 500GB, 1TB or 2TB of storage, the mobile SSD offers room for many files. We have already tested the new model.

The Samsung Portable SSD X5 comes in a high-quality metal and plastic housing. The red plastic feels relatively soft and very pleasant, while the metal provides a feeling of high quality. Compared to the previous T-series, the case has changed significantly and has unfortunately also become much heavier with 150 grams compared to 51 grams. This is mainly due to cooling elements, as the waste heat generated by the high speeds must be dissipated. The SSD is about the size of a small power bench, so it fits in any pocket, even if it’s bigger than its predecessors.

As with all SSDs, the data is much better protected against external influences because there is no magnetic disk that could break in a fall.

The Samsung Portable SSD X5 now uses a Thunderbolt 3 port that doesn’t differ visually from the USB Type C port of the previous Portable SSD T5, but is significantly faster. Only a Thunderbolt cable is included and no USB cable anymore.

The test system used was a Schenker SLIM 14 with a Thunderbolt 3 connection and full connectivity. 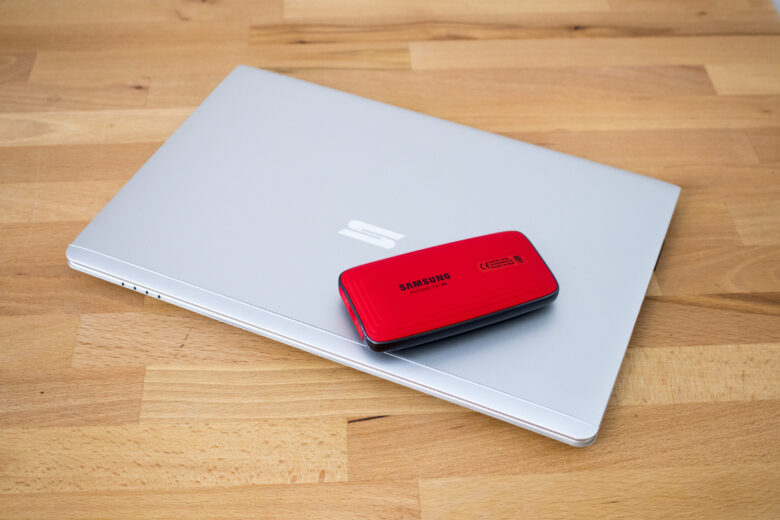 According to Samsung, the Portable SSD X5 offers speeds of up to 2,800 MB/s. This makes it almost as fast as the internal NVMe SSDs and even surpasses some models. In our test, the Portable SSD X5 can also deliver these values. It is noticeable, however, that the temperature rises noticeably during prolonged use and the SSD then unfortunately also throttles. Therefore we have attached several ATTO Disk Benchmark Screenshots. In normal operation, however, this will rarely be achieved and even throttled the speed is even higher than with an external hard disk with magnetic disk.

In our test we did not activate the AES encryption in order not to slow down the speed.

This time Samsung is not a pioneer when it comes to external NVMe SSDs, but delivers a solid product, which is currently cheaper than the competition. Unfortunately, the slightly larger and much heavier case is disadvantageous compared to the Portable SSD T5. However, the new model convinces with a very high speed, which simply has to be cooled. Nevertheless, the Portable SSD X5 is slowed down in continuous use.

Overall, the Samsung Portable SSD X5 is recommended in its range. For most people, however, one of the predecessor models, which delivers speeds of around 500 MB/s, will probably be sufficient.

Super fast and comparatively cheap. Unfortunately, it overheats in continuous operation and is heavier than its predecessors.

goodram IRDM M.2 SSD in test – a new star on the SSD market?

Kingston FURY Renegade HS: SSD with up to 7,300 MB/s reads